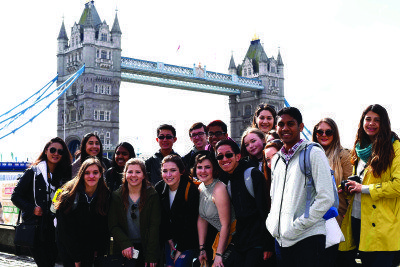 Visiting the cities of London, Oxford, Stratford-upon-Avon and Dublin, students were able to see the favorite haunts of some of the most celebrated European writers in history. The trip coincided with the 400th anniversary of Shakespeare’s life and death and began at the Globe Theatre, where special screenings of Shakespeare’s plays were held along the River Thames. The tour continued nonstop to Buckingham Palace, the Tower of London, the National Portrait Gallery, the British Library and the London Eye. Upon leaving London, the group embarked on a journey into the wizardry and magic of the Warner Bros. Harry Potter Studio, drinking Butterbeer and flying on broomsticks.

Academia took center stage when the group explored Oxford and Christ Church College on their way to Stratford-upon-Avon. The students visited Shakespeare’s birthplace and burial site, and enjoyed an acting workshop before seeing a performance by the Royal Shakespeare Company at the Swan Theatre. The last leg of the trip took the group to Conwy Castle in Wales and on a ferry ride across the Irish Sea to Dublin. After spending a week eating fish and chips, practicing their best British accent and immersing themselves in all things literary, everyone made their very own unforgettable memories together.