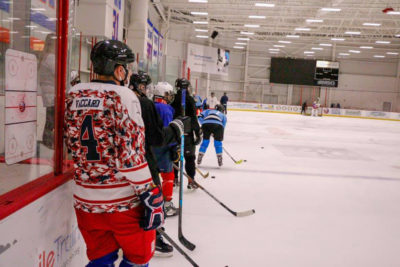 The stakes are different, but the values of a hockey team and a military unit run parallel. Things like teamwork, camaraderie, looking out for the person next to you, following a plan and working hard to achieve a goal. Hockey teams preach things like battle level, but the men and women of our military have seen the real thing upon deployment.

It’s those similarities that make hockey—and other team sports—such a natural fit for veterans upon returning home. Of course, some of our nation’s vets haven’t had the opportunity to play the game, so the New York Islanders and USA Hockey wanted to change that by hosting a Try Hockey For Free event for vets.

“The program is to get veterans out on the ice to really get them more involved and back into the community because transitions from military life to civilian life can be difficult,” Rob Schembri, a former sergeant in the Marine Corps, said. “Camaraderie is one of the most difficult things for them to find again, so that’s what I’m trying to bring together here. We’re trying to get all the veterans together and that way they are with the same type of people they are, been through some of the same situations and just being together as a veteran again.”

Twenty-five former servicemen and women descended upon Northwell Health Ice Center for a free one hour on-ice session. Free in every sense of the word. Free ice, free gear to use for those who don’t have it and free instruction from former Islander Arron Asham. 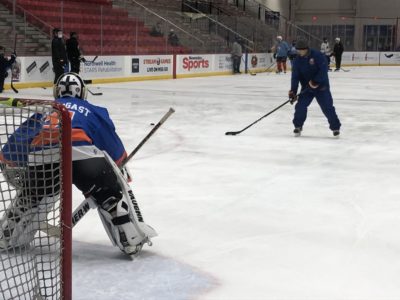 Veterans of all skill levels hit the ice. Some looked like seasoned vets, snapping wristers top corner, while others were just learning how to skate, getting one-on-one attention on the perimeter. The goal for USA Hockey rep Mike Vaccaro is to make sure each veteran has a positive experience. He calls it ice therapy, a chance for veterans to be in a fun environment and take their minds off the experiences or hardships they’ve been through or are currently undergoing.

“We have a lot of people who have what they call invisible wounds,” Vaccaro said. “They’ve had surgeries, they’ve had traumatic brain injuries, PTSD, they’re going through a lot of issues. We like to call hockey ice therapy; it’s a way they can get together with people in the military and they’re bonding together just like their unit. When they’re on the ice, they forget about everything, you’re in a whole new environment and you’re helping each other, so it’s veterans helping other veterans as they get on the ice. If it’s once or twice a week, or once every other week, it’s something to look forward to, keep them motivated, keep them moving, to forget about some of the bad times they had and just to get them through another day.”

For the veterans that fall in love—or back in love—with the game, the goal is to start a warrior hockey team, made up of disabled vets who go out and compete against other military teams.

The team is being spearheaded by Schembri, as well as USA Hockey and the Isles, and once formed, will eventually compete in national tournaments like the Warrior Classic and regional meetups. There are currently 36 such teams, including squads in New Jersey and Philadelphia, but this will be the first of its kind in New York.

“There are programs all over the place,” Vaccaro said. “It’s like NHL rivalries and now that the Islanders are getting this program started, I’m sure there’s going to be another team that’s going to want to start up close by. The support from the Islanders is what’s really important. I don’t think they realize what they do helps these veterans out.”

Schembri appreciates it too. Veterans were greeted by a table full of gear on Monday, helmets and skates from the Islanders, plus large donations from Bauer and regular people looking to help out. Add in the event and warrior team sponsorship and it feels like a tangible way to show thanks for their service.

“It means a lot,” Schembri said. “It goes to show we haven’t forgotten our veterans. They see something that everybody believes in, and know they wouldn’t have their freedoms without the veterans, and they all pull together and this is the result. We have a lot of equipment, we’re going to have a lot of vets on the ice today and just hopefully we’ll have a good time.”

—Cory Wright is a writer for the National Hockey League