Brad Kolodny embarked on a unique journey in 2015. The Syosset native and member of Midway Jewish Center wanted to see every Jewish house of worship, known as a synagogue, on Long Island.

“We were completely redoing our sanctuary, and I was a photographer in college,” Kolodny said. “So the night before the demolition of the sanctuary, I went in to take pictures. I wanted to have memories.”

Once he took the pictures, he thought of a great idea. He started the Instagram page @synagoguesoflongisland. From there, he began looking up different synagogues on the island, posting pictures of the different sanctuaries, inside and out.

“There’s an epidemic of synagogues closing and being sold,” he said. “Who is going to remember those places? Who is going to know about the places already gone?”

As the project continued, he decided it was time to turn this into a book. Titled Seeking Sanctuary, 125 Years of Synagogues on Long Island, Kolodny explores 385 historic congregations across Long Island, varying in size, location, age and more. 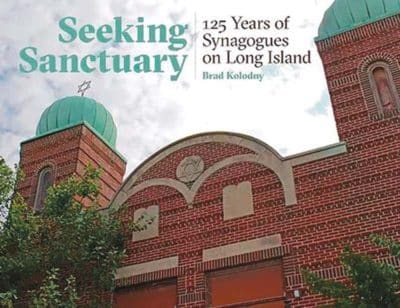 The book, published by Segula Publishing, features 128 pages of unique content about the history of Judaism on the island.

Kolodny discusses the history of Judaism on Long Island, starting with European immigrants working at a rubber factory in Setauket, who came together to create the region’s first synagogue. They created Agudas Achim in 1896, he said. Throughout his search, he found 219 active synagogues, varying from orthodox, conservative, reform and other denominations. He also acknowledges the difference between synagogues based on the origin of the congregation (i.e. Persians compared to Ashkenazim).

So out of the hundreds of synagogues Kolodny has seen, which is his favorite? Well, there are two.

“The former Congregation Beth David in Lynbrook,” he said. “It was the only building on Long Island built in a Moorish style. It has two onion domes at the top, which is very unique and very old, from 1928. They merged with another in 2011 and it’s now a Baptist church.”

Kolodny is also fascinated with the former Temple Emanu-El in East Meadow, which merged with another congregation from Wantagh last year.

“It was a beautiful, mid-Century modern architecture,” Kolodny said. “The sanctuary was built in a circle. It was a round building. The walls of the circular sanctuary were made of concrete and stained glass, with all different colors. They were six-sided windows, so it gave the illusion of being inside a beehive.”

The book is already one of the most popular for those looking to read about Judaism. It’s ranked No. 1 on Amazon’s list of new released in the history of Judaism category.
But before picking up the book, Kolodny has a message for readers.

“Appreciate Jewish history on Long Island, whether knowing Howard Stern had his bar mitzvah in the Roosevelt Jewish Center or having interest in visiting a synagogue in Sag Harbor that’s 120 years old,” he said.

Seeking Sanctuary, 125 Years of Synagogues on Long Island is available for purchase on Amazon.