New Book Depicts The History Of Synagogues On Long Island

Ira Poliakoff, a native of Rockville Centre, may not reside in Long Island, but his knowledge of Judaism does.

“I’ve always been interested in this particular subject [Jewish history] and I decided to take a shot at it,” Poliakoff said.

Poliakoff was taking a walk with his granddaughter in downtown Philadelphia when he came up with the idea to write Synagogues of Long Island.

“One day I was walking near Independence Hall with my granddaughter. We passed what looked like a condominium, but there were Jewish markings in the brickwork on the building; there was a Jewish star and all different markings,” he said. “My granddaughter asked me, ‘why are there Jewish markings on this apartment house?’ I had to explain to her it was an old synagogue but was repurposed into a condo building. So, the reason I wrote the book was for her generation and the future generations so when they pass by these old buildings that are no longer synagogues, whether it be on Long Island or anywhere, they’ll know the answer.”

The process for writing Synagogues of Long Island took Poliakoff two years and a lot of traveling since he lives in Philadelphia. While traveling, he got to see some beautiful synagogues, but some stood out more than the rest. 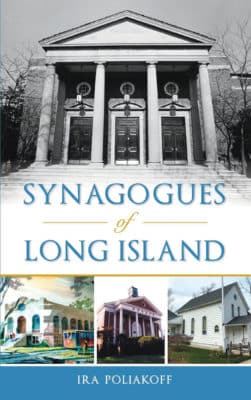 “I came to Long Island to interview people, but fortunately, a portion of the photographs in the book were either taken by friends of mine or I was given permission from archives to use their photographs,” Poliakoff said. “There are a few that stand out in my mind like Temple Beth El of Cedarhurst and Temple Emanu-El of East Meadow, which recently closed. That’s a very interesting building [Temple Emanu-El], the Western Wall of the sanctuary is made up of tiny glass windows that looked like the Lite-Brite child’s toy because it was made up of thousands of little red, white and blue windows so that’s a great architectural piece.”

As for the book, chapter length ranges from only one page to numerous, depending on the locations of the synagogues due to the Jewish population in that city. Even though some are no longer congregations, Poliakoff still honored those synagogues.

Baldwin Jewish Center, according to Poliakoff’s book, was the first synagogue in Baldwin but closed their doors in 2010 after being sold to the Christian Worship Center. Fortunately, in 2014, Baldwin was able to merge with South Baldwin Jewish Center.

While Synagogues of Long Island is about the history of synagogues, Poliakoff wants the readers to learn about Jewish history as a whole.

“They can see the history of Jewish on Long Island through the eyes of more than 250 synagogues that either existed or do exist in Nassau and Suffolk County,” Poliakoff said.

Even though Poliakoff hasn’t lived on Long Island in many years, he still loves it and was able to educate many people about Jewish history from the palpable part of Judaism. Poliakoff has two more books in the works; one of them is about the synagogues of Philadelphia and the other looks at conservative Judaism.

Synagogues of Long Island is available on Amazon as well as www.barnesandnoble.com.