BY Laura Curran, Nassau County Executive As I write this, the skies above Long Island are filled with smoke blown east from the wildfires raging...
Read more
Books

Andrea Bolender’s wrist says a lot. The bracelet on that wrist is powerful, a constant reminder of what her father went through 75 years...
Read more
TOP STORIES 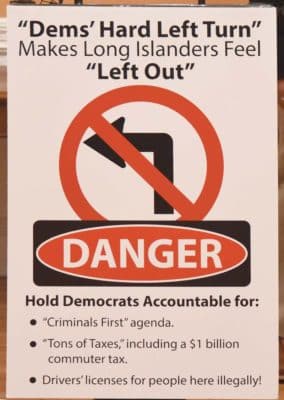 Doesn’t quite fit on a bumper sticker, but that is the indictment of the New York State Senate Democratic majority by Nassau County Republicans.

Tarred by the same brush are the six members of the Long Island senate Democratic contingent, part of their party’s control of all three branches of state government.

This dominance has led to what Democrats termed as the passage of a progressive agenda. To the GOP, however, it was a “radical” agenda representing a “hard left turn” that was distinctly unfriendly to already overburdened taxpayers.

The GOP held a press conference at their Westbury county headquarters on June 25 to preview some campaign themes.

“It’s time to put the people first and vote the Democrats out beginning this November,” declared Nassau County Legislature Majority Leader Richard Nicolello after detailing some of the laws enacted in the recently concluded state legislative session.

These included drivers licenses for undocumented residents, new rent regulations that “will lead to fewer units and abandoned buildings,” per Nicolello, cashless bail reforms that will favor criminals and an energy policy “that puts power in the hands of bureaucrats to control our economy in the guise of reaching impossible to reach goals with respect to carbon emissions.”

All of these initiatives, he summed up, “will force more residents to leave our county and our state, will continue to strip our middle class and make our communities more dangerous.”

“Long Islanders have…generally reacted with disbelief and outrage to the extreme legislation passed by the newly-minted Democrat State Senate,” said Assemblyman Ed Ra of Franklin Square. “From eliminating bail for many serious crimes, including dealing deadly drugs, to the new $1 billion commuter tax, Albany Democrats are out of touch with suburban voters. Neighbors will hold Democrats accountable for their actions this year and in 2020. The Democrat agenda does not represent the interests of hard-working Long Islanders.”

Ra took particular aim at bail reform, noting that “the crimes that are no longer eligible for bail include criminally negligent homicide, aggravated vehicular homicide, manslaughter in the second degree, grand larceny, aggravated assault upon a person less than 11 years old and promoting prostitution in a school zone. DAs throughout New York State call for changes before the end of this legislative session, knowing that come Jan. 1, these provisions are going to take effect. The Democratic majority in both houses did not listen when we left Albany last week without addressing these [issues].”

What for its sponsors was necessary reform of bail laws, Ra concluded, will “have a drastic impact both on public safety and the quality of life here on Long Island.”

Senator Anna Kaplan of Great Neck said in a statement, “Following the close of an historic legislative session in Albany that brought back record funding to Long Island schools and included the passage of a permanent property tax cap, Nassau County Republican officials have resorted to a playbook of fear-mongering and dog-whistle politics in a desperate grasp at relevance. Long Islanders deserve officials who deliver on a pro-suburban agenda, as this senate majority has, not cowards who fail to put forth any positive solutions for our region.”