The Long Island Nets were busy in the community recently, providing transportation for dozens of senior citizens to a local polling site, as well...
Read more
Long Island News

Town of North Hempstead Supervisor Judi Bosworth and the Town Board, along with the town’s Veterans Advisory Committee, are promoting the Northport VA Medical...
Read more
TOP STORIES 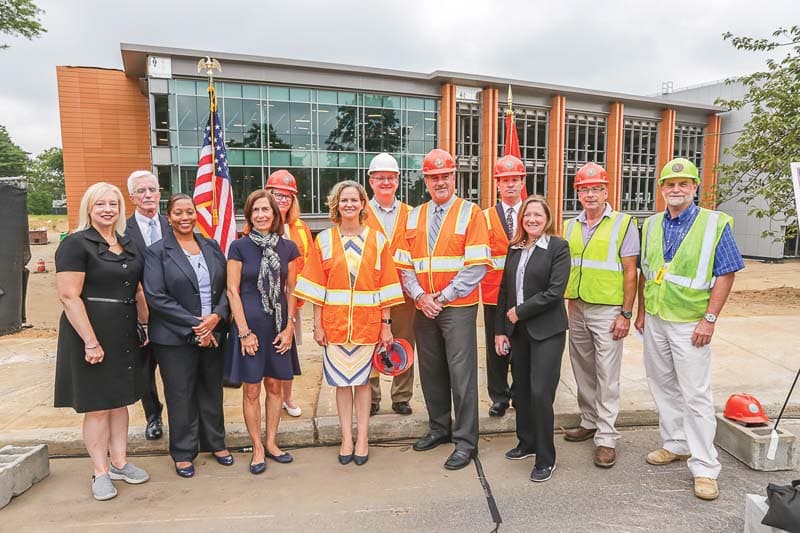 Nassau County Executive Laura Curran recently invited members of the media and community leaders for an exclusive tour of the construction at the Nassau County Family and Matrimonial Center in Mineola.

The 240,000 square foot County facility being retrofitted, located at 101 County Seat Drive, was earmarked to become the new court building soon after the previous tenant of the building, Department of Social Services, moved to Uniondale in 2004. The project, stalled by the previous administration for over a decade, has been fast tracked by Curran. The first phase of the renovation which includes the exterior envelope of the building is expected to be complete in October.

“The current Family and Matrimonial courts are cramped, out-of-date and unsuitable for the needs of those that frequent them,” said Curran. “This project has been in limbo for over a decade. Enough is enough—it’s time to get it done! I have an aggressive timeline to finally complete this project.”

Upon project completion, the Nassau County Family and Matrimonial Center will move its locations at 400 County Seat Drive in Mineola and 1200 Old Country Rd., in Westbury. Both locations have more than 50 years of service and the Westbury location is also more than two miles away from the State Supreme Court and County Courts. The new location will improve the court system as well improve the parking and congestion issues of the current locations. While the court is moving, the juvenile detention facility will remain in Westbury.

The court will also include components of Long Island’s first Family Justice Center, a location offering legal and other services for domestic violence victims.

“Establishing Long Island’s first Family Justice Center has been one of my top priorities as District Attorney because victims and those in crisis need one-stop access to comprehensive services to ensure their safety and to help them get back on their feet,” said Nassau County District Attorney Madeline Singas. ”I’m grateful to County Executive Curran and of our partner agencies for their commitment to bringing this important resource to serve the people of Nassau County.”

The plans and specifications for interior retrofit of the building are currently available to construction firms through the county’s E-Procurement website. Bid proposals will be received next month.

The second phase of this project includes the interior renovations and will include 23 court rooms for family court and 13 court rooms for matrimonial court. The building will include state-of-the-art communication, access control and video surveillance security system, prisoner holding cells, 14 new elevators including dedicated Judge’s and prisoner elevators, as well as public elevators. The building will also have new stairs, an atrium, courtrooms wired for Internet, and a ceremonial court room.

The project is expected to be complete in 2021.