A little rain is no deterrent to Muse fans. The English rock band, consisting of Matt Bellamy, Chris Wolstenholme and Dominic Howard, drew big numbers to Jones Beach Theater on Saturday evening, despite the weather. The trio’s dynamic showmanship and theatrics never disappoint.

Muse is currently on tour with special guest 30 Seconds to Mars. Fronted by Oscar-winner Jared Leto, the alternative rock band also consists of Shannon Leto and Tomo Miličević. They played a powerful set, closing with “Closer to the Edge” off of 2010’s This is War, inviting dozens of awestruck fans onto the stage, every one of which recorded the thrilling moment on their cell phones to relive time and time again.

New single “Dig Down” opened the headliner’s show with a bang. Vocalist and guitarist Matt Bellamy strutted around the stage in red skinny jeans, shutter shades and a floral bomber jacket revving the motor of that guitar like no other. Cutting-edge graphics displayed on modular video screens depicted the electrical current running through all human beings.

The anti-authoritarian theme ran strong with songs like “Psycho,” introduced by a shouting drill sergeant, “Mercy” and “The Globalist,” all off the band’s seventh studio album, Drones, a Grammy-winning concept album about the dehumanization of modern warfare. 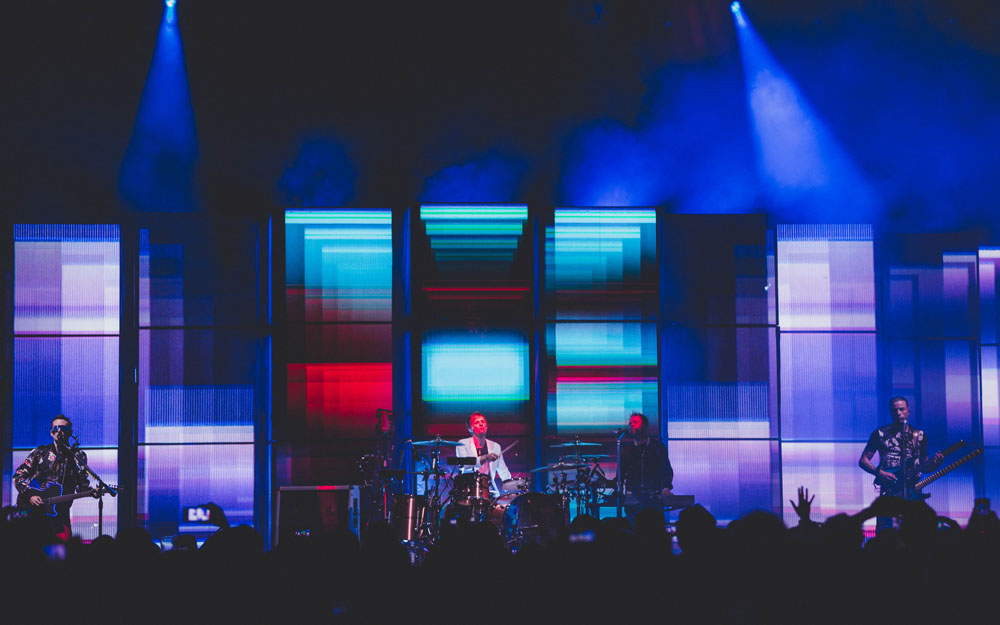 No song was more apropos than “Resistance,” with the protagonist’s fear of the ‘thought police,’ in an age when the default setting of many in this country is tuned to ‘resist.’ The word resistance has taken on a new meaning over past months and who better to provide the soundtrack to this unending struggle than Muse.

“Hysteria,” with its frenzied flashing lights and power grunge fervor, had every pair of hands clapping in unison. Crowd-pleaser “Time Is Running Out” remains as enthralling as it was when it hit U.S. radio waves in 2004 and can’t be topped live.

Bellamy made his way out into the stadium seats to perform “Starlight,” one of the revelations from 2006’s Black Holes & Revelations. He dedicated the song to Chester Bennington, vocalist for Linkin Park who sadly died by suicide earlier this month. The lyrics speak directly to the suicide epidemic in this country, reiterating that there is always someone who cares if you live or die. Bennington’s death has hit Linkin Park followers hard and “Starlight” provided a brief catharsis for the many fans in the Jones Beach audience that the bands had in common.

This was also the moment giant confetti-filled balloons were unleashed in the stadium, surprising those whose heads provoked their explosions. Wild streamers and confetti filled the entire venue, lit by spotlights in a spectacular scene.

Capping off the night, an epic video depicting a post-apocalyptic world synced with “Uprising” and “Knights of Cydonia.” The encore exemplified why a Muse concert is amazing to experience live.

Wet, but no worse for wear, the crowd left satisfied with another unforgettable show by one of the best rock bands on the map.

Muse performs a special concert tonight at Central Park Summerstage to benefit The Coalition for the Homeless. For more tour dates, visit www.livenation.com.

For a listing of upcoming shows at Northwell Health at Jones Beach Theater, visit www.jonesbeach.com.