Editor’s note: This article appeared on page 8 of the Great Neck Record on Thursday, April 15, 1982. It was transcribed for the purpose of republishing on Long Island Weekly. 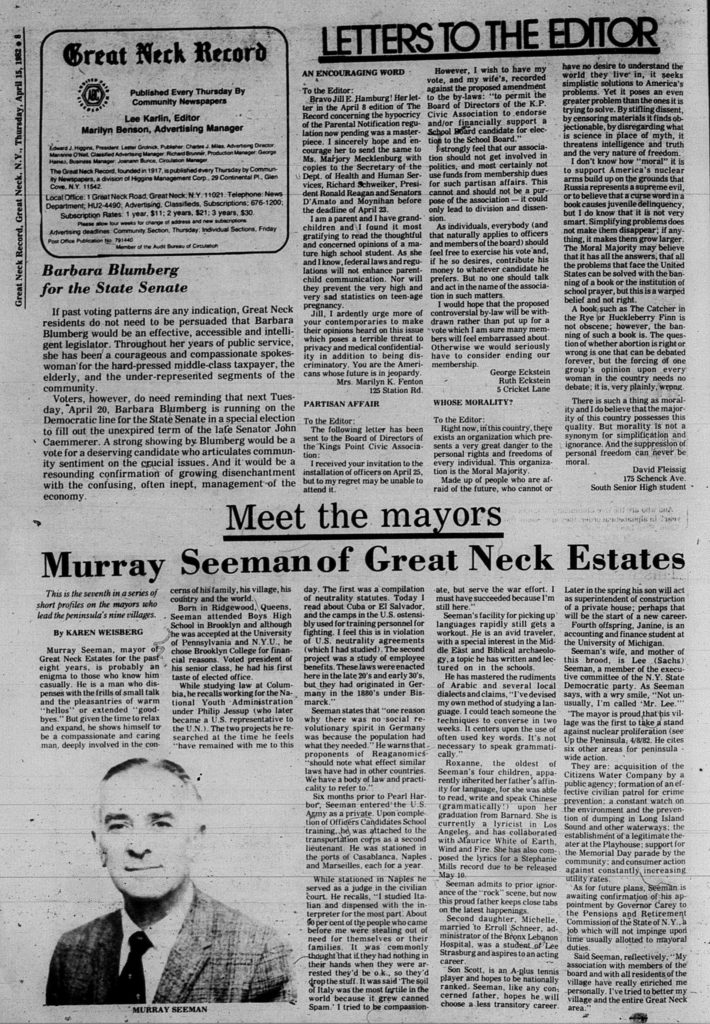 This is the seventh in a series of short profiles on the mayors who lead the peninsula’s nine villages.

Murray Seeman, mayor of Great Neck Estates for the past eight years, is probably an enigma to those who know him casually. He is a man who dispenses with the frills of small talk and the pleasantries of warm “hellos” or extended “goodbyes.” But given the time to relax and expand, he shows himself to be a compassionate and caring man, deeply involved in the concerns of his family, his village, his country and the world. 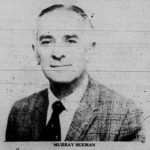 Born in Ridgewood, Queens, Seeman attended Boys High School in Brooklyn and although he was accepted at the University of Pennsylvania and N.Y.U., he chose Brooklyn College for financial reasons. Voted president of his senior class, he had his first taste of elected office.

While studying law at Columbia, he recalls working for the National Youth Administration under Philip Jessup (who later became a U. S. representative to the U/N.). The two projects he researched at the time he feels “have remained with me to this day. The first was a compilation of neutrality statutes. Today I read about Cuba or El Salvador, and the camps in the U.S. ostensibly used for training personnel for fighting. I feel this is in violation of U. S. Neutrality agreements (which I had studied). The second project was a study of employee benefits. These laws were enacted here in the late 20’s and early 30’s, but they had originated in Germany in the 1880’s under Bismarck.”

Seeman states that “one reason why there was no social revolutionary spirit in Germany was because the population had what they needed.” He warns that proponents of Reaganomics “should note what effect similar laws have had in other countries. We have a body of law and practicality to refer to.”

Six months prior to Pearl Harbor, Seeman entered the U.S. Army as a private. Upon completion of Officers Candidates School training, he was attached to the transportation corps as a second lieutenant. He was stationed in the ports of Casablanca, Naples and Marseilles, each for a year.

While stationed in Naples he served as a judge in the civilian court. He recalls, “I studied Italian and dispensed with the interpreter for the most part. About 90 percent of the people who came before me were stealing out of need for themselves or their families. It was commonly thought that if they had nothing in their hands when they were arrested they’d be o.k., so they’d drop the stuff. It was said “The soil of Italy was the most fertile in the world because it grew canned Spam.” I tried to be compassionate, but serve the war effort. I must have succeeded because I’m still here.”

Seeman’s facility for picking up languages rapidly still gets a workout. He is an avid traveler, with a special interest in the Middle East and Biblical archaeology, a topic he has written and lectured on in the schools.

He has mastered the rudiments of Arabic and several local dialects and claims, “I’ve devised my own method of studying a language. I could teach someone the techniques to converse in two weeks. It centers upon the use of often used key words. It’s not necessary to speak grammatically.”

Roxanne, the oldest of Seeman’s four children, apparently inherited her father’s affinity for language, for she was able to read, write and speak Chinese (grammatically!) upon her graduation from Barnard. She is currently a lyricist in Los Angeles, and has collaborated with Maurice White of Earth, Wind and Fire. She has also composed the lyrics for a Stephanie Mills record due to be released May 10.

Seeman admits to prior ignorance of the “rock” scene, but now this proud father keeps close tabs on the latest happenings.

Second daughter, Michelle, married to Erroll Schneer, administrator of the Bronx Lebanon Hospital, was a student of Lee Strasberg and aspires to an acting career.

Son Scott, is an A-plus tennis player and hopes to be nationally ranked. Seeman, like any concerned father, hopes he will choose a less transitory career.

Later in the spring his son will act as superintendent of construction of a private house; perhaps that will be the start of a new career.

Fourth offspring, Janine, is an accounting and finance student at the University of Michigan.

Seeman’s wife, and mother of this brood, is Lee (Sachs) Seeman, a member of the executive committee of the N.Y. State Democratic party. As Seeman says with a wry smile, “Not unusually, I am called ‘Mr. Lee.’”

The mayor is proud that his village was the first to take a stand against nuclear proliferation (see Up the Peninsula, 4/8/82).

He cites six other areas for peninsula-wide action.

They are: acquisition of the Citizens Water Company by a public agency; formation of an effective civilian patrol for crime prevention; a constant watch on the environment and the prevention of dumping in Long Island South and other waterways; the establishment of a legitimate theater at the Playhouse; support for the Memorial Day parade by the community; and consumer action against constantly increasing utility rates.

As for future plans, Seeman is awaiting confirmation of his appointment by Governor Carey to the Pensions and Retirement Commission of the State of N.Y., a job which will not impinge upon time usually allotted to mayoral duties.

Said Seeman, reflectively, “My association with members of the board and with all residents of the village have really enriched me personally. I’ve tried to better my village and the entire Great Neck area.”