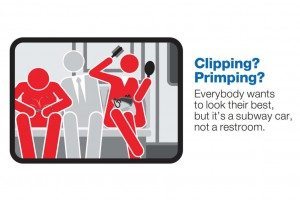 Realizing it must do something to curb the excesses of its cuticle-clipping, multiple-bag carrying, bottomless-bag-of-popcorn-eating denizens, the Metropolitan Transportation Authority (MTA) has launched a Courtesy Counts campaign.
Trying to bring self-awareness to those who’ve intentionally set their self-awareness button to zero is a noble effort, albeit one which is swimming against the tide of anti-social mass transit behaviors.
Indeed, I cannot pinpoint when the Long Island Rail Road (LIRR) and the New York City subway’s cars turned into a spa/youth hostel/cafeteria mash-up but I am glad the MTA is pushing back.
The MTA’s personal hygiene billboard in the city is headlined: “Clipping? Primping?” The text: “Everybody wants to look their best, but it’s a subway car, not a restroom.” If you’re clipping your nails or trimming your eyebrows on a train, you are incapable of being embarrassed so I doubt if appealing to common decency will move the needle on this one. Still, these sentiments must be expressed publicly, and the MTA is right to say it.

The MTA’s backpack message “Take Your Pack off Your Back: It’s a simple way to add standing room.” Look, the backpack-wearing masses don’t even realize they are carrying one. It is something they see as an extension of their bodies. There are Sherpa guides, however, who travel lighter than some of the folks on the LIRR and the city’s subways. I’m going to work on the assumption every one of these people lives alone. If there was another person in their residence, someone would surely ask them on their way out the door: “Do you really need to carry all that stuff with you?”

To those who insist on eating while on the rails, the MTA offers this reminder: “It’s a Subway Car, Not a Dining Car. It may be take-out but please, don’t eat here.”The word ‘please’ was an unnecessary addition to the latter sentence. I laughed years ago in this space at the weight-loss company who was advertising on the LIRR. They were reaching an unreceptive audience, I explained. If you repeatedly witness people riding the train while downing multiple slices of pizza and washing it down with a goblet of wine, they aren’t counting calories. Today, the LIRR is filled with billboards from a snack food company which sells its wares under the headline of “That. Now.” The ad campaign was clearly designed by someone who knows the mass transit audience. You want to find an undisciplined, impulsive eater who’d give YouTube’s ravenous honey badger a run for his money? Scan a LIRR car, at any time of day or night.
There are other MTA ‘courtesy counts’ messages for people who blast music into their heads (Keep the Sound Down), toss things on the floor (Take Your Litter with you) and place their belongings in the empty seat next to them (Keep Your Stuff to Yourself).
“Manners make a better ride. Be someone who makes it a better ride for everyone. Others will thank you. Ok, we can’t guarantee a ‘thank you’ but we’re sure they’ll notice and appreciate it,” the MTA states in billboards and on its website. Alas, I’m afraid flying cuticles, filled-to-the-brim backpacks, and rolling buffets are here to stay.

A modest proposal—the LIRR should bring back its smoking cars. Given a choice, this nonsmoker would rather deal with a mushroom cloud of carcinogens than a nail-clipping, multiple-bag carrier at feeding time.