With a frenetic energy washed in 1950s-era gloss, a robust cast and sharp writing, The Marvelous Mrs. Maisel returned last week to Amazon Prime for its second season.

The hit show burst onto the streaming scene in 2017, debuting to critical acclaim and, more importantly, rave reviews from fans who were immediately obsessed with the quick-witted period comedy. Amazon wasted no time and picked the show up for a second and third season, while the initial run garnered multiple accolades, including eight Emmy Awards.

“They put you in this world and you can’t ask for anything more than that as an actor,” said Zegen of the writers, who, along with a team of set designers, absolutely nail the 1950s aesthetics. “The writers do so much research for that time period to get everything right. It really puts you in it. I go to work and I am in the 1950s and that is so extremely important.” 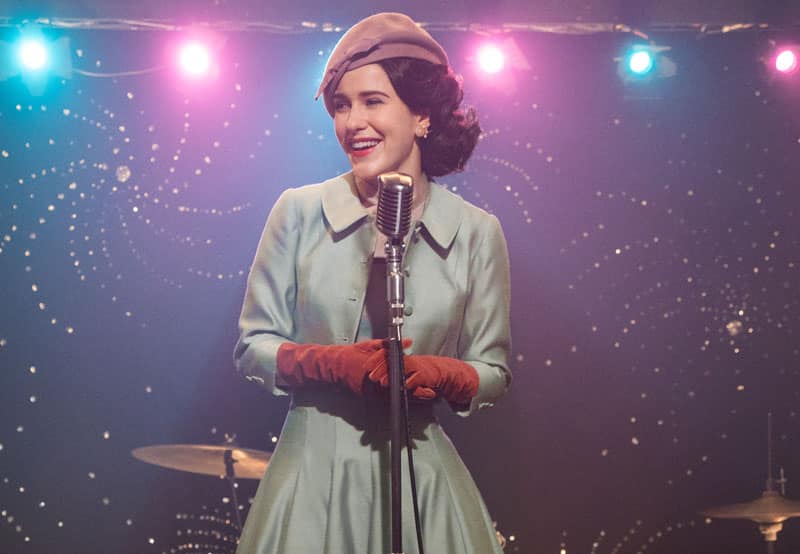 And in that world, Zegen’s Joel Maisel looks to bounce back from screwing up his marriage to Midge in the show’s debut run. [Season one spoilers ahead]. After revealing the tawdry details of an affair with his secretary, Joel leaves his wife in the middle of the night, setting off a chain reaction that leads to Midge discovering her prowess as a comedian. It was a full-on villainous role for Zegen at first, until his character begins to realize his marriage’s implosion wasn’t his wife’s fault, but instead, his own insecurity’s doing. It’s the kind of character development that an actor dreams of, according to Zegen.

“I had nothing to do with Joel’s arc from jerk to sympathetic character,” said Zegen. “All of the writers, with Dan and Amy, created his arc in season one and didn’t tell me anything about where this character was going to end up. When I first got the part and started filming, I assumed that Joel was the villain or at least the antagonist and I embraced it.”

Embracing that character meant absorbing some Internet vitriol from fans, some of whom reached out to Zegen via Twitter to tell him that Joel is “trash.”

“I take it a little personally because I am Joel, but anytime an actor gets someone to feel, good or bad, you are doing your job,” he said. “A lot of actors love playing the villain because it is often the meatiest part. You don’t want to be Batman, you want to be the Joker. Well, who am I kidding, I’d want to be Batman, too.”

Zegen’s career path to his eventual turn as a series regular on Maisel puts the actor squarely in the “Where do I know him from?” category. Most prominently, Zegen found himself as a semi-regular on Denis Leary’s firefighter drama Rescue Me, in a handful of episodes of The Walking Dead as well as in the role of Bugsy Siegel on Boardwalk Empire, the latter of which saw him working with Steve Buscemi, an honor that the Reservoir Dogs-obsessed Zegen called “one of his lifelong dreams.”

Of all the roles he ever landed, including a co-starring part in the film adaptation of The Seagull, Zegen said that Joel Maisel was the one character he coveted the most. Zegen went on three auditions and had to wait about two weeks after his last read-through before he heard anything from the producers.

“I didn’t think I was going to get the role. I was biting my nails and cursing the world during those two weeks. I was thinking, this was the one part I wanted and I screwed it up,” he said. “It was amazing when I got it. It feels like the part was written for me. The character really resonates with me. I think subconsciously I had always been waiting for the right role and somehow this came around. It was kismet. This guy Joel is so much fun to play and I felt like I knew this guy and could play him better than anyone else.”

It helps that he is playing opposite Rachel Brosnahan and others that include Tony Shalhoub, Marin Hinkle, Alex Borstein and Kevin Pollack, who plays Joel’s father Moishe Maisel. It’s a collection of actors that Zegen calls “real heavyweights” and he also says that “there is no weak link on the show and everyone really brings their own charm to their characters.” As for Brosnahan in particular, Zegen said there is a reason Maisel viewers are so drawn to the title character.

“I love Rachel, she is the best,” he said. “Anytime you get to work with an actor of her caliber, it is a total joy. She is so hardworking, she knows all her lines and that is so important because her character has so many lines.”

And all those lines have to come from somewhere, which brings it all back to what Zegen believes is the most important component of the show—the writing. The dialogue, overflowing with clever, fast-paced repartee, is a style that can be largely credited to Sherman-Palladino, who was previously best known for her work on Gilmore Girls, among other projects. For Zegen, the writing is world-building in the truest sense of the term.

“With Maisel, it’s all on the page,” he said. “And we have such great writers and not only that, we are surrounded by this world with 1950s cars and vintage costumes, so it’s easy to get into this role and become the character. It’s so collaborative. Amy and Dan, they have a vision for what they want, but they allow the characters to evolve based on what the actors are bringing to the performance. Not only that, the show is so visually stunning, to me it’s like an old-timey movie. Like one of those grand 1950s movie musicals.”