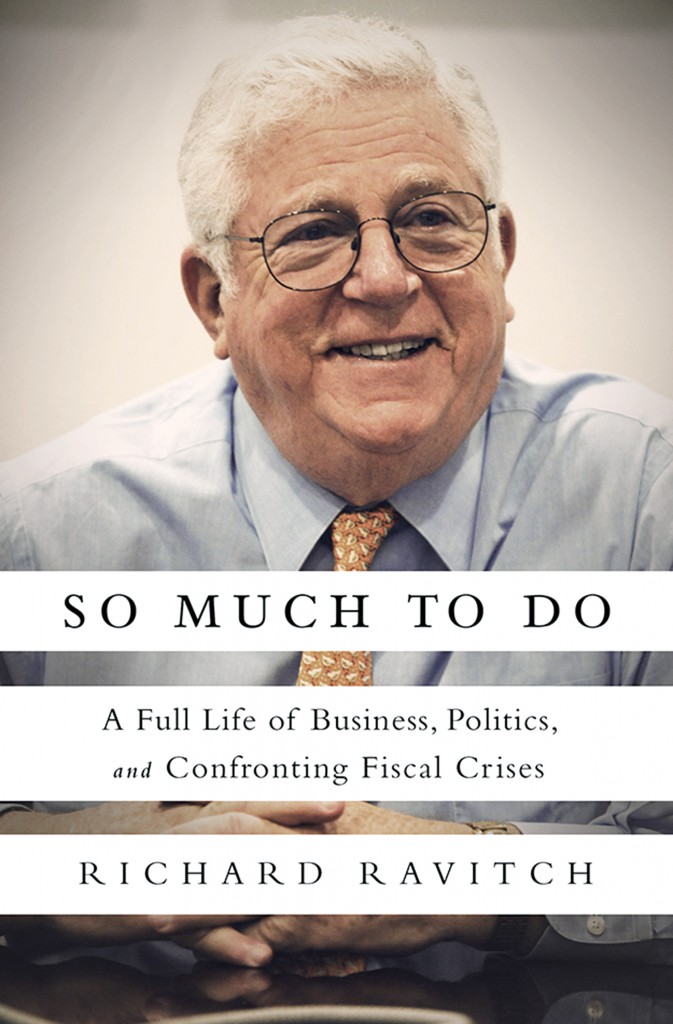 New York State’s governmental and political crises of 2009 and 2010 are vividly recalled in former Lieutenant Governor Richard Ravitch’s lively memoir, So Much to Do (Public Affairs). It is being published on Tuesday, April 29.

Ravitch, an 80-year-old attorney who served as chairman of the Metropolitan Transportation Authority (MTA) in the early 1980s, is promoting his autobiography with two public appearances.

The first is on Wednesday, April 30, at the New York Public Library, Fifth Avenue at 42nd Street, from noon to 1 p.m. The second will be held on Thursday, May 1, at Hunter College’s Roosevelt House, the one-time home of President and Mrs. Franklin Roosevelt, at 47-49 East 65th Street, Manhattan, starting with a 5:30 p.m. reception. Prospective attendees for the latter event are asked to register online in advance.

“This discussion at Roosevelt House highlights two aspects of this essential book: the stories of what Mr. Ravitch did and saw in his career of more than 40 years, including colorful anecdotes about political leaders such as Ed Koch, Hugh Carey and Daniel Moynihan, as well as the lessons learned and why they are relevant to the serious fiscal problems facing cities and states across the nation,” The Roosevelt House Public Policy Institute’s website states. “Mr. Ravitch believes the most potentially devastating economic and financial crisis in the near future will emanate not from federal debts and policies, but instead from state and local governments in denial about financial commitments they don’t have the resources to cover.”

Ravitch was appointed lieutenant governor in 2009 by Governor David Paterson. Paterson had vacated the lieutenant governor’s position when he became governor in 2008. Ravitch’s appointment came amid extraordinary turmoil in the state Senate. That chamber was sent into disarray five years ago when two Democrats decided to caucus with the Republicans, tipping what had been a 32-30 Democratic advantage into a 32-30 GOP edge. A semblance of order was restored when the two Democrats rejoined their Democratic state Senate colleagues.

During his 18 months as lieutenant governor, Ravitch explains, he worked closely with the state’s Division of the Budget, examining how New York collects and disburses taxpayer monies.

What he found, and reports on, is illuminating. Ravitch, for instance, highlights how New York’s out-sized financial commitments to Medicaid, a multi-billion-dollar health care program for the poor, accounts for about one-third of the state’s annual general fund expenditures. He later notes New York’s Medicaid spending could grow even faster under the federal Affordable Care Act.

And he pulls no punches when chronicling Albany’s budget gimmicks, such as New York State’s 1991 sale of Attica, a state prison, to one of the state’s public authorities, the Urban Development Corporation (UDC). The prison’s sale price more than 20 years ago was $200 million, with the UDC raising the money to purchase Attica by issuing bonds.

“By the time I became lieutenant governor, the state had spent $400 million on [Attica prison] rent payments to UDC, twice the amount it [New York State] had received for selling the asset,” Ravitch writes. The UDC is today housed within the Empire State Development Corporation (ESDC).

Ravitch also assails “pension smoothing,” a practice which allows the state and municipalities to delay their pension fund contributions, with state lawmakers characterizing the maneuver as a cost savings to taxpayers. The policy, in reality, means “more than two billion dollars of the assets of the New York State Employment Retirement System now consists of promissory notes instead of the cash that governments should have been contributing to fund the system,” according to Ravitch.

Mayor Koch, Governor Carey, and Senator Moynihan are portrayed in a favorable light by Ravitch. Neither Gov. Mario Cuomo nor the family of the late George Steinbrenner will be pleased.

Ravitch has been a participant in New York’s public affairs dating back to his days as a Columbia University undergraduate in 1952 where, he writes, he had trouble finding a prominent figure to address an on-campus Adlai Stevenson for president rally. Showing at an early age the savvy and moxie which would serve him well throughout his career, Ravitch tells how he not only recruited then-former First Lady Eleanor Roosevelt for the assignment, but also went out to lunch with her. He will likely be the only person at Roosevelt House next week who can say he dined with one of its most famous residents.