Spring 2023 Hope For The Warriors Military Spouse and Caregiver...

Moxxie Mentoring is a foundation based on Long Island that works with matriculating college women in order to inspire them to lead and to eventually win big. Founder and CEO Beth Meixner has plenty of moxie…the idea to start the foundation had been embedded in her psyche for years. A successful advertising/ marketing executive, Meixner left her well-paying job in order to launch Moxxie Mentoring Foundation in 2012.

Moxxie’s goals are to empower women not to just succeed but to run the company. She’s teamed up with women executives across the NYC Metropolitan area, bringing them together through various channels. Meixner’s mentoring foundation targets driven college students in order to provide them with the extra tools to succeed. These are the tools that will help catapult them to the level of CEO, president, founder, etc.

Meixner said, “Are women today higher up in companies, yes; but are they running the businesses? No, they’re not.” Meixner believes that there are companies out there that have women board members and offer women incentives to move up the ladder, but there aren’t that many. She said, “Many companies say they have women in charge; women running the day to day but it simply isn’t true.” 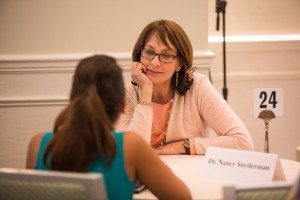 Moxxie Mentoring offers many different types of mentoring such as “junior moxxie.” A mentor is matched with a mentee in order to offer one-on-one assistance. The mentor will bring the mentee to her workplace and be available for emails/phone calls to talk in order to develop a close relationship with one another that will perhaps last a lifetime.

Their philosophy is that shared contacts and support from fellow businesswomen who advocate women’s leadership can assist young women in developing and advancing their careers. 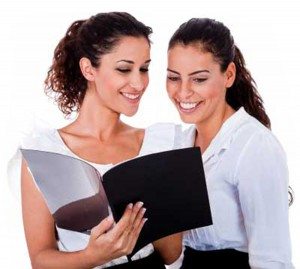 Mentee Olivia Balog, who attends Adelphi University said, “Through the Moxxie Mentoring program and the guidance and advice from my mentor Diane Duel, I’ve gained invaluable experiences and skills regarding leadership, networking, philanthropy, negotiating, interview and resume etiquette and, most importantly, what makes women in the workplace a strong force. As a first-time mentor, Diane’s open-minded and cheerful personality has made it easy for me to learn while at the same time building my own strong work ethic and envisioning the future path I would like to pursue. I had the opportunity to connect with so many inspiring women from companies such as Canon and WABC who are top leaders in their industry. It makes me feel special to know that, no matter the age or field, we all share the same goals and objectives; we want to increase the future possibility of women taking over as CEOs and owners.”

“I picked the word moxie because it means determination, courage, assertive energy initiative and it fit the bill perfectly for all of our participants,” said Meixner. “I’m proud of the work we’ve done. We’ve given them the tools they need: initiative, direction and drive. Our program is proof that women have just begun their surge to the top.”