Consider these recommendations for upcoming virtual talks, readings and more in and around New York City: The Tyranny of Merit: What’s Become of the Common...
Read more
TOP STORIES

In typical Mitch Albom fashion, the legendary sports reporter and author has penned yet another American classic. This time around, he walks readers through an emotional journey in Finding Chika: A little girl, an earthquake, and the making of a family.

Out of the many books Albom has published throughout the years, this is what he calls “the hardest book I’ve ever had to write.”

“The story is brutally honest, and that’s what makes it tender and loving,” Albom told Long Island Weekly. 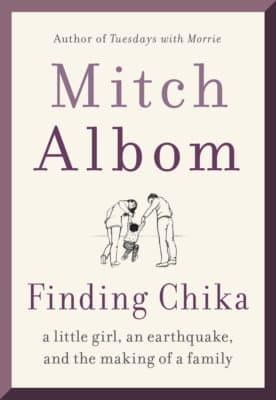 Finding Chika is based on “Mr. Mitch’s” time with Chika Jeune, who was born in Haiti three days after the disastrous 2010 earthquake destroyed most of the island nation. Jeune’s mother died when she had another child, leaving her with Herzulia Desamour, the little girl’s godmother.

It was Albom’s job to carry Chika.

By the time Chika was 3 years old, she arrived at the Have Faith Haiti Orphanage in Port-au-Prince, which Albom took over in a miraculous way after the earthquake. He runs seven charities, and this was his latest way to give back to a community that needed help.

“I just figured that’s fate or G-d telling me to do something,” Albom said about running the orphanage. “I didn’t plan on it. I just went down to Haiti to check it out and see if I could help in a small way. I wound up taking over this orphanage. Once I took it over, I felt like I needed to make it better. Once I made it better, I felt that I need to admit more kids. There were so many kids out there suffering, and I felt like I needed to help them.”

As Chika grew in the orphanage, director Alain Charles noticed that something changed. Her eye drooped, and no neurologist could properly diagnose her.

When she arrived in Detroit, Albom and his wife Janine Sabino, who never had a child of their own, made her a true part of the family. That’s when doctors diagnosed her with diffuse intrinsic pontine glioma (DIPG), a tumor in the brain stem with no effective treatments.

By June 2015, the dynamic couple dedicated their lives to Chika, accompanying her on trips to Mott Children’s Hospital, sitting in the waiting area for hours while she had brain surgery. And Albom is not afraid to share the scariest details about this unbelievable experience.

“I don’t think you can tell a story like this without being honest about it,” he said. “We’re dealing with a lot of important subjects—life and death to begin with, adoption, orphans, foreign countries, earthquakes, marriages.”

Throughout the journey, Albom becomes a father-like figure to a girl who never really knew her father. She met him when she was little and before she died, but didn’t know him on a personal level like she did “Mr. Mitch.”

The strength this 5-year-old showed throughout her short time on earth is awe-inspiring. Not only did she show how a stranger can accept her as family, but she persevered through thick and thin to fight for two years, when doctors originally said she would live for just a few months.

“We knew from the moment Chika came to America that it was possible her time with us could be limited,” Albom said of his own lessons with Chika. “Very rarely did we let any special occasions go without filming it. Somebody was always around.”

It has been 22 years since Albom published Tuesdays with Morrie, the best-selling memoir of all-time. The book, which detailed Albom’s weekly visits to his old professor, Morrie Schwartz, has sold more than 17 million copies.

But Finding Chika was a new challenge for the seasoned writer. He was honest with himself, more than ever before. He discussed the struggles of what it was like to travel across the globe, attempting to save his beloved Chika’s life.

“I had a lot of great teachers, and I had another great one in Chika,” Albom said.

Her struggles will hopefully inspire change in not only DIPG treatment, but in the journey to help kids who don’t have a family to take care of them.

Since Albom penned Finding Chika, he’s brought several other children from the orphanage to America. In April, after four months of treatment, Gaelson Augustin, 6, returned home to Haiti thanks to a live-saving esophageal surgery. One of the kids who he’s brought into his Detroit home was actually with him while he chatted with Long Island Weekly.

“He was left to die under a tree when he was 4 days old,” Albom said as he choked up a bit. “Someone found him, picked him up and carried him. He’s had medical challenges ever since, and others have needed to come up for treatment. It’s an ongoing thing.”

Proceeds from Finding Chika, published by HarperCollins, will go to the Have Faith Haiti Orphanage, helping the 50-plus kids who are now growing up in the facility. The memoir can be purchased in book stores or online at www.mitchalbom.com.

Previous articleMystic, Connecticut: A Perfect Winter Getaway
Next articlePower Play Back To 1980 With The Islanders