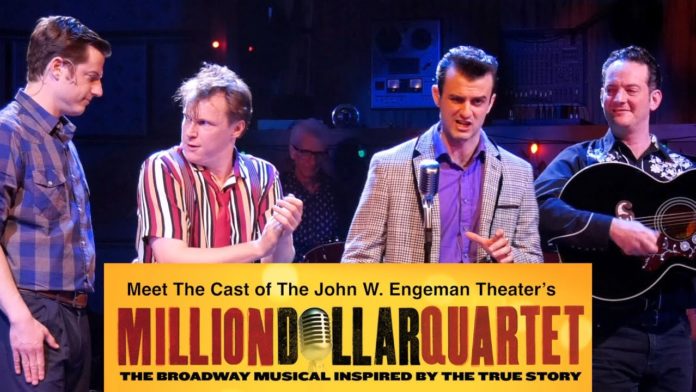 On December 4, 1956, an extraordinary twist of fate brought Johnny Cash, Jerry Lee Lewis, Carl Perkins and Elvis Presley together at Sun Records in Memphis for what would be one of the greatest jam sessions ever. Featuring a treasure trove of hits from these music legends, including “Blue Suede Shoes,” “Fever,” “Walk The Line,” “Hound Dog,” “Who Do You Love?,” “Great Balls of Fire,” and many more, Million Dollar Quartet not only plays the music that made the Golden Age of Rock and Roll, it tells the stories of the men who created it.

“The story is really about Sam Phillips, who discovered all four of these icons at Sun Records in Memphis, Tennessee,” said Luke Darnell, who plays the famed record producer. “He is hugely responsible for the sound of rock ‘n’ roll.”

He added, “In the show, there’s a line about ‘if you’ve got talent, then I’ll pull it out of you,’ and apparently that was really true.”

“I particularly like the storytelling in this show because it takes place on one singular night,” Carey said. “We don’t jump through time, we don’t see these people at different stages of their life. It’s one room and it’s four guys hanging out, getting to know each other, actually jamming.”

Sky Seals, who plays the one and only Johnny Cash, explains how he approached the character on stage.

“One of the first things actually our drummer, Dave [Sonneborn], who is the musical director, said to me is ‘just do ‘Folsom [Prison Blues]’ just like the record—you gotta hit some of those things so that people will go, okay, Johnny’s here,’” Seals said. “’Then you can start finding your own performance.’”

The name Carl Perkins doesn’t resonate in quite the same way the names Elvis Presley, Johnny Cash and Jerry lee Lewis do. Sam Sherwood, portrays the singer-songwriter-rocker at a time when he was trying to get his career back on track.

“Part of Carl Perkin’s story and a big part of the story of Million Dollar Quartet is how his career didn’t take off the way that it probably would have if things had been just a little bit different,” Sherwood explained. “He did have this huge triple-crown hit with ‘Blue Suede Shoes.’ Elvis did record it and Elvis made it an even bigger hit than the Carl Perkins record. That pivotal moment unfortunately kind of took the wind out of Carl’s sails as far as having a successful career.”

Elvis’ girlfriend at the time was fictionalized into the character of Dyanne, played by Sara Ellis in this production.

“All of these musicians are fabulous and it’s just so fun as a musical theater performer [because] you never get to have the band with you on stage,” Ellis said, remarking that the band or orchestra are usually down below the stage in the pit. “Everyone is playing all their instruments live on stage. We have the flexibility to kind of play and try new licks and just have a ball on stage.”