Iconic English guitarist/composer Steve Hackett has been on a nonstop flight of creativity that has taken him, both literally and figuratively, to the far ends of the earth. With a career spanning more than 50 years, Hackett’s imagination has cultivated a global audience that eagerly looks forward to each album and each tour.

Best known for his innovative lead guitar work with the progressive rock pioneers, Genesis, Hackett has spent the decades since his departure from the band in 1977 pursuing his muse, a quest which has proved insatiable and lifelong. Inducted into the Rock and Roll Hall of Fame in 2010 as a member of Genesis, Hackett allows his music to speak for itself.  However, in conversation Hackett is revealed as a true Renaissance man of culture, a quiet genius whose words reflect a deeply intelligent, profoundly spiritual soul.

I had the opportunity to catch up with Steve a few days before he and his band kicked off their North American tour, which comes to Long Island on March 8 at the NYCB Theatre at Westbury.

This time around, Hackett will be featuring a complete performance of Selling England by the Pound, the 1973 Genesis album that is his self-described favorite from the band’s catalog that resonates strongly with him.

“Well, you know, I think it came out of left field,” Hackett said. “Back in the day, I don’t think anyone realized how popular it was going to become. I think that’s the best atmosphere and attitude to undertake an album. We didn’t realize that John Lennon was going to say that we were one of the bands he was listening to at that time. I think that the band’s playing took a quantum leap forward on this one. (There were) lots of instrumental passages. I was very proud of its quirky Englishness. It’s still my favorite Genesis album; I think it’s better written than all of other ones.”

The show will also include solo material from Spectral Mornings and Defector, the latter of which is celebrating its 40th anniversary this year. 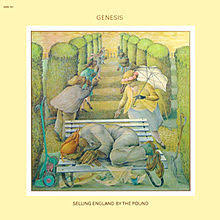 Hackett has included a rare nugget in the current set list: a bonus track from the Selling England album, “Déjà Vu” marks the only occasion of a collaborative effort between Hackett and Peter Gabriel, the band’s original singer. Asked whether the two ever considered working together again after leaving Genesis, Hackett replied, “I never really tried to hit Pete up for that. I mean, we’ve helped each other, swapped phone information and all that. We’re basically pals, but I think I’ve always been aware that he wants to distance himself.”

Not only do Hackett’s fans span the globe, the array of musicians with whom he’s worked is multi-continental in scope.

“Yeah, the last couple of albums had 20 people on them from all over the world,” he said with a chuckle. “This time, we managed to incorporate India into the mix. Sheema Mukherjee, she plays wonderful sitar on ‘Shadow and Flame,’ so for the first time I was working with a real sitar virtuoso rather than trying to do an impression of it myself. It’s my proudest album, I think, as a convincing travelogue, a journey.”

Asked about the evolution of this global approach to making music, Hackett explained, “We didn’t start out with the idea of trying to build bridges between cultures, it just happened naturally. In other words, the rise of right-wing politics and nationalism seems designed to drive people apart; I think it’s an opposite direction to the way I’ve been working recently. I feel that my albums celebrate the best of whatever people are capable of; it doesn’t matter where they’re from. I’m very happy to work with people all over the globe—the United States, the U.K., Iceland, Africa. If not people from those places, certainly instruments from those places, which the guys in the band have adopted and adapted to, so it’s a very wide church.” 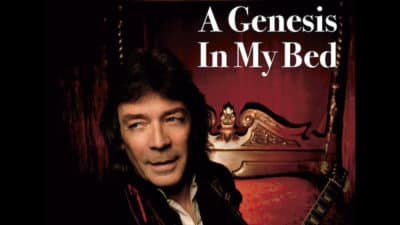 In July, Hackett will be publishing his autobiography, A Genesis in My Bed. Pun fully intended, I inquired as to the genesis of the project and its journey to fruition.

“I’d done a series of interviews way back in the past with Alan Hewitt, and people were referring to it as “my book” and I kept saying to people, well, actually it’s not my book; it’s Alan’s book, and I was the interviewee. Doing that is not quite the same as doing a much more considered, in–depth thing, where you’re having to think about why you did something, how you feel about it now. I wanted it to be more revealing, and not just a complete collection of anecdotes. I didn’t think that was going to do the ideas justice. I’ve really gone into the music in a big way, and I hope people like that. There are the jokes and asides and all those other things, and I’ve hope I’ve been fair about all the people I’ve once worked with. I don’t think there’s anyone whose praises I didn’t sing. There might be the odd criticism, but in the main, I’m overwhelmingly positive about everybody. I might tweak the noses of a few, but, you know, that doesn’t matter. I think it’s been fun doing it, and we are still at the stage of putting in some extra things we haven’t thought about.”