Mike Birbiglia Hosts Stand Up And Vote At Hofstra University

Hess' shows off its first ever ambulance The 2020 Hess Ambulance & Rescue is rushing to the holiday scene this year. This heroic and versatile pair...
Read more
News

Consider these recommendations for upcoming virtual talks, readings and more in and around New York City: American Eden: Botany and Medicine in the Early Republic Wednesday,...
Read more
Healthy Living

The Facts Of Medicare

How the process works and when to enroll What is Medicare? Medicare is health insurance for people ages 65 and older. However, there are some exceptions...
Read more
TOP STORIES

The list of names read more like something you’d see on a Governor’s line-up than hosting a free voter registration drive on a college campus. But that was the point, as comedian Mike Birbiglia hosted Stand Up and Vote, an evening of comedy and voter registration, at Hofstra University.

The Sept. 20, Hofstra event was one of several that Birbiglia hosted at college campuses across the country, aimed at motivating students to register to vote. While students enjoyed comedy inside the Helene Fortunoff Theater, representatives from HeadCount, a nonprofit, nonpartisan organization that promotes civic engagement, were in the hallway, registering students.

“You should consider voting. I don’t know if you noticed this, but we’re living in strange times,” said Birbiglia in his opening set. “I never cared about voting but lately, I’m just like ‘when can we vote again?’ I’m just wandering into high school gymnasiums, looking for levers…pulling fire alarms…because it’s an emergency. It’s a very unique type of emergency.”

Birbiglia and fellow comics Tom Thakkar, Sam Jay and Ted Alexandro not only provided humorous social commentary on the current political climate, but the perils of social media, terrible family members and living in New York. 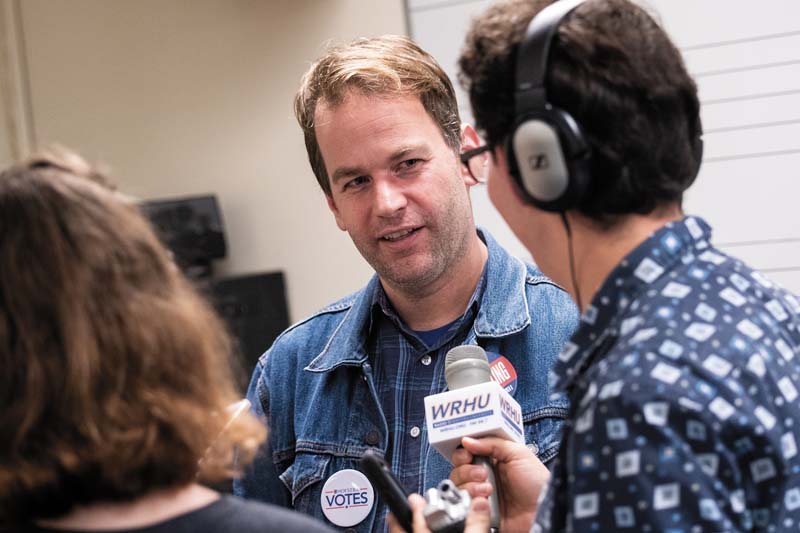 Hofstra, which has held two presidential debates and the recent New York State Democratic gubernatorial primary debate, seemed a logical stop on Birbiglia’s tour. The university is currently in the middle of a Hofstra Votes campaign, which includes voter registration events, machine demonstrations, lectures and programs addressing policy issues on both sides of the aisle.

While the roughly 300 students who attended are only a small portion of Hofstra’s 6,861 undergraduate student population, when asked by Birbiglia if they were registered, the vast majority of the audience raised their hands.

“I definitely think its important, especially in this political climate, for people to take the initiative to be aware of politics and politicians running,” said Spencer Thurmond, president of on campus improv group Ha Ha Hofstra, which helped organize the event with the Student Government Association. “Our vote matters and people being able to sign up, especially at a college campus, is really important.”

“I’m already registered, and it’s very important people vote. I just wanted to come support and I also love Mike Birbiglia,” said student Briana Bonfiglio. “I think a lot of liberal students are waking up and voting. It’s gotten better but it could be better as far as young people turning out to vote.”

Hess' shows off its first ever ambulance The 2020 Hess Ambulance & Rescue is rushing to the holiday scene this year. This heroic and versatile pair...
Read more

Hess' shows off its first ever ambulance The 2020 Hess Ambulance & Rescue is rushing to the holiday scene this year. This heroic and versatile pair...
Read more
Arts, Music & Entertainment

Ice Cream In the Cupboard film reflects disease’s reality According to the Alzheimer’s Association, up to five percent of the more than five million Americans...
Read more