Michael Bublé Is Looking To Take You Higher

How easy would it be for Michael Bublé to stick with the status quo? The Canadian vocalist is handsome, has a solid set of pipes and crafted a career out of being the kind of crooning standard-bearer of the Great American Songbook that found him inheriting the mantle from Harry Connick, Jr. in the past two decades.

But with his eleventh studio album Higher, the 46-year-old British Columbia native instead chose to push himself, particularly in coming out of the pandemic-fueled existential hangover the world has slowly been emerging from. It’s an experience Bublé acknowledges he and his family were fortunate enough to be cushioned from, while still appreciating that not everyone was in his shoes, particularly members of his band and crew who were unable to pay bills. It was a dire enough situation for Bublé to embark on a quick 32-date 2021 fall tour as COVID-19 numbers were spiking. Precautions were taken in the form of requiring proof of vaccination or a negative test 48 hours prior to the show, and something he admitted in prior interviews a number of fans “weren’t very happy” about. But for Bublé, it was an important example to set for his three children (wife Luisiana Lopilato is pregnant with the couple’s fourth child).

“Because of all those beautiful human beings that have supported my family for so long, I didn’t have the same worries a lot of people had,” Bublé said.” I came from a very privileged place where I didn’t have to worry about paying my rent, how to get food or stuff like that. I really wanted to make sure my actions showed my family that when you come from that kind of privilege, you have a responsibility to lead by example with humility and empathy. It was definitely scary and if you’re an artist and say you weren’t scared, then you’re lying.” 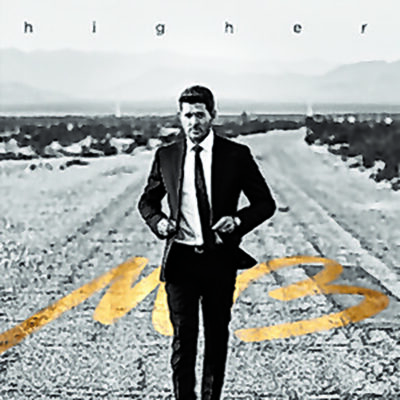 It was during that time that Buble decided to push himself in a way that found himself going into the studio and working with a new batch of creative partners that ran the gamut from known names like Paul McCartney, Willie Nelson and Ryan Tedder to up-and-coming talents like singer-songwriter Michael Pollack. It’s an experience he unpacks with a mix of deep understanding and goofball bravado.
“There were so many times in my career where maybe I didn’t do the scary thing,” Bublé admitted. I sort of wanted to make sure I stayed true to the audience and I didn’t move too much. I was proud that I took this step. It was funny but I said to my manager, ‘Bruce, I really want to branch out. I want a Renaissance in my style. I don’t want it to change. I just want it to get better.’ It was interesting because he said, ‘Listen kid, the big deal isn’t the balls to do that. It’s having the balls to realize or accept what happens if it doesn’t work.’ For me, that was the step. When I finished, I was really emotional. Like I said, it was a big kind of move for me and when I heard the final product, I knew I was a genius.”

Can fans still expect those big brassy horn charts and Bublé channeling his inner Frank Sinatra? No doubt as evidenced by the inclusion of a swinging “Don’t Get Around Much Anymore” and a string-soaked reading of Mildred Bailey’s “Don’t Take Your Love From Me” that demands a belt of Scotch in a darkened corner of a saloon. But then there’s a walk-through of Sam Cooke’s seminal “Bring It On Home to Me” that benefits from a slow build-up gilded by full-blown gospel accompaniment. About the only other major surprises on this outing are a cover of Bob Dylan’s “Make You Feel My Love” from Zim’s critically acclaimed 1997 album Time Out of Mind that sounds as if Gamble and Huff were given a crack at crafting the string arrangements for this cut. Elsewhere, McCartney personally dusted off and produced “My Valentine” off his 2012 album Kisses On the Bottom playing Nelson Riddle to Bublé’s Chairman of the Board while Nelson and his musical host put a distinctive personal spin on the former’s classic “Crazy.”

And that doesn’t even take into account a massive lefthand turn via a faithful cover of Barry White’s “You’re the First, the Last, My Everything.” Making this experience all the more rewarding for Bublé was the fact that it was all accomplished in spite of the roadblocks the pandemic threw up.
“It was a hugely ambitious project and I think even because of COVID-19 protocols, some of the things we did were virtually impossible,” Bublé recalled. “I don’t even know how we did it. We had to find certain rooms. One of the songs I started out with was ‘Smile’ and we had 120 pieces. We had to find a room to accommodate that many people through COVID-19 and we wound up in a movie studio—it wasn’t even a music studio. So there were all these sort of things and people around me that really had to step up and find a way. Of course, writing songs over Zoom—going back and forth [was interesting]. What I dug about that process is that I had to let go. I couldn’t micromanage the way that I usually do and hold everything close to my chest.”

Fresh off a tour of Europe, Bublé continues to be jazzed and grateful about being back on the road, particularly when he’s asked about what fans can look forward to now that live music is coming back in such a robust manner.
“[Concert-goers] can expect that I spent every single moment of the last three years thinking about how I’d make this show unique, new and special,” he said. “I was really excited about showing up again, connecting with people and giving them something that was refreshing for them and completely took them away. And I have succeeded. This will be one of the greatest shows they ever see in their life. For me it’s exciting because I needed to be refreshed. I needed a reboot. I needed to do something that was new, incredible and ambitious. And I needed it to match how damn good that record was. I think when we look back at this record, we’ll look at it as being the most successful record of my life and I don’t mean commercially. In the meantime, fans can come and see a guy that’s put it all on the line.”