Melissa Etheridge Returns To the Scene Of The Crime

Novelist Thomas Wolfe once famously quipped that you can never go home. Clearly, he’s never met Melissa Etheridge, whose new album One Way Out, consists of seven songs she penned in the late 1980s and early 1990s. While this material is roughly three decades home, the seed for Etheridge’s sixteenth studio album was planted in 2013. At the time, she was working on a proposed box set of archival recordings when she across this cache of material that inspired the Kansas native to revisit them.
“A lot of these were things I had recorded for different albums where I’d done one take and then decided I couldn’t do it and moved on,” she said. “These were songs I’d done demos of and forgotten about. This is stuff I wouldn’t write now because I’m not feeling sexually frustrated and ‘For the Last Time’ was written at a time when I didn’t want everybody to know sexually frustrated I was. All of these are songs that I loved back then, but it was done before I came out. ‘Wild Wild Wild’ was obviously about a woman, so I pushed it aside and left it. But it’s fun to sing those songs. It’s like finding a treasure and seeing that I can do this again—rock and hit you in the teeth and while it’s truthful, I don’t have to have gone through it now. It’s so nice to look back at them and know I can play them now.” 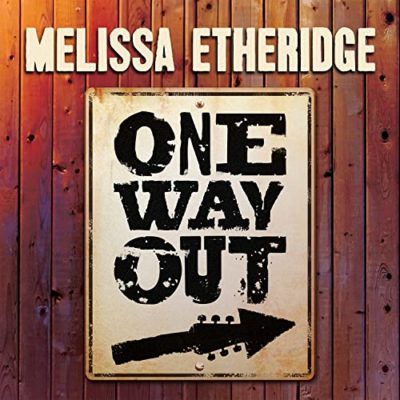 While the box set never came to fruition, she did go back into the studio with her old band of guitarist John Shanks, bassist Kevin McCormick and drummer Fritz Lewak. Once the group reunited, they hit the studio and recorded new versions of the songs that were intended for this proposed multi-disc anthology. Instead, Etheridge parted ways with longtime label Island Records and since she paid for the sessions, the singer-songwriter owned the masters, which wound up in the vault, In the near-decade since she cut those songs, the sexuagenarian rocker survived cancer, cut three records and was ready for a fresh start coming out of the pandemic.

“When COVID-19 hit and BMG approached me and said they’d love to release something, I said I actually happened to have something that was already recorded and all done,” she explained. “It fits this time. The songs are ready and I love coming back on tour with these songs. It’s really fun.”

One Way Out opens with the title track, a cut that blisters with smoldering guitar riffs, filthy harmonica runs and a sinewy groove. From here, the rest of the album plugs into a barroom rock and roll vibe that ranges from the Stonesy strut of “As Cool As You Try” and the more ruminative “I’m No Angel Myself,” a confessional nod to a former partner to “For the Last Time,” an in-your-face stomper in the vein of vintage Humble Pie. Tying it all together are “You Have No Idea” and “Life Goes On,” a pair of songs recorded live in 2002 at West Los Angeles’ Roxy. The whole experience of pulling One Way Out proved to be a surreal experience in a way that made the California native feel like she was bending the time space continuum far different than her prior recording experiences.

“Each album is a growing and learning experience for me and I love each one so much because they’re all different in their own way,” she said. “This one is unique because its older songs recorded newer, but also a few years ago. It’s a time capsule of a time capsule and I dig that. Now I’m going to go out and perform these live and probably make recordings now of these songs that go back. And it’s still 100 percent me.”

With touring now back on the table, Etheridge is thrilled to throw the pandemic shackles off, having spent the past year-and-a-half live streaming from her garage five days a week onto an Internet channel called EtheridgeTV, where she could bring shows and entertainment to fans that subscribed. When asked what fans can expect from her hitting the road through the end of 2021 and into 2022, Etheridge is bubbling over with excitement to be back in her natural element—playing music before a live audience.

“You can expect me to be having so much fun,” she said. “Because I’ve had so much time to think about it, I’ve decided to have the band learn 50 more songs than they knew. The catalog is huge because not only am I going to bring the hits like I do. We’re going to do ‘Fist In the Air,’ “I’m the Only One’ and ‘Come To My Window.’ But we’re also going to do a couple of new songs a night off the new album, but in every show, I’m going to do a little highlight of two of my albums. I’m going to play tracks from deep off those albums and kind of talk about each one of those records. There’ll be three from the first album and three from the last album. It’ll be from albums I don’t do [touch on] as much or songs I don’t normally play. We’re kind of going to steer in there, do the hits, jam on some songs and have a good time. We’re going to be back with people loving music.”