Masters Of Illusion Coming To CW 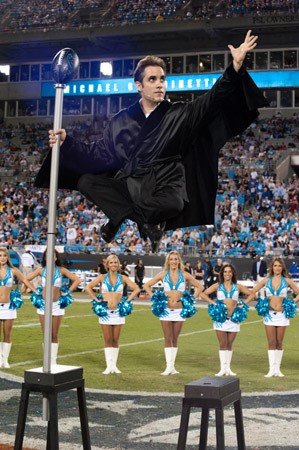 Michael Grandinetti has come a long way since he first found a Fisher Price magic set underneath the Christmas tree in 1982, when he was just five years old.  With national and international performances now under his belt, Michael is set as one of the stars in the new CW series “Masters of Illusion.”

Hosted by actor Dean Cain (“Lois & Clark: The New Adventures of Superman”), Masters of Illusion premieres on Friday, August 1 (8:00-8:30pm).  Each week, the series will feature a variety of cutting-edge grand illusions, daring escapes, fascinating sleight of hand, interactive mind magic, and hilarious comedy routines, all performed in front of a live audience in Hollywood.

Michael is a modern young illusionist with contemporary flair and an inventory of stunning original illusions, and an engaging personality.

Not your ordinary magician, Michael’s career history boasts performances on television series and specials (NBC’s The World’s Most Dangerous Magic, Entertainment Tonight, SportsCenter, The Bold and the Beautiful), for NFL halftime shows while surrounded by 70,000 people, with Oscar-winning composer Marvin Hamlisch and symphony orchestras, in theaters and arenas around the country, and even at The White House.

Last year, Michael was the first illusionist ever invited to appear in the National Independence Day Parade in Washington DC, where he levitated a girl high above a float as it moved down Constitution Avenue.  He also threw out the first pitch for the Miami Marlins vs Pittsburgh Pirates baseball game at Marlins Park, after, of course, making the game ball magically appear.  This summer, Michael will be appearing for 8 weeks, from June 19-August 10, at the Grand Sierra Resort in Reno, NV.

But, even more prominent than his illusions is Michael’s personality.  A true “people person”, whether he is performing a massive grand illusion or intimate sleight of hand, Michael’s sincerity and passion for his work comes across the footlights and creates a strong bond with his audience.  His performance during the series taping at Hollywood’s Red Studios was not only met with loud applause, but also described as “Brilliant!” by one audience member present.

Born and raised in West Mifflin, PA, a small suburb of Pittsburgh, Grandinetti, 36, has been performing magic now for over 30 years.  Since first starting in magic, he has grown from a child practicing card tricks in his bedroom and performing neighborhood shows, to working hard to achieve large and challenging goals, to amassing a resume beyond most other magicians on the performing scene today.  Michael now resides in Los Angeles.

For “Masters of Illusion”, Michael filmed several of his large-scale and audience interactive illusions, including the “360 Degree Levitation”, “Mid-Air Vanish”, and “Rosebush Through Time”.  For his performance of “Walking Through Steel”, Michael he was assisted by American Idol and Broadway star Ace Young, who examined the 7ft tall, 200lb metal barrier closely.  Michael also recreated a historical piece of magic, first performed by Orson Welles in the 1940’s, utilizing borrowed items and members of the audience.