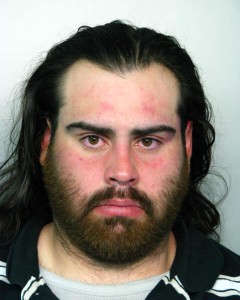 A Massapequa man was arrested after allegedly slashing a man’s face on May 1 in Freeport.

Police say 25-year-old Dominick R. Alborez was involved in an altercation with a 39-year-old male victim on Sunrise Highway in the vicinity of Henry Street at around 8:20 p.m.

Alborez chased the victim northbound across Sunrise Highway and threw him to the ground and when a 35-year-old male witness attempted to intervene, Alborez produced a knife and threatened the second victim, according to police.

Police say Alborez then slashed the first victim across his face causing a serious laceration.

Freeport Police responded to the scene and arrested Alborez nearby.

The victim was transported to a local hospital where he was admitted for treatment of his injury. There were no other injuries reported.

Alborez is charged with assault, criminal possession of a weapon and menacing.