Anton Media Group, the publishers of 17 newspapers on Long Island, is putting together a cover contest open to local artists. The winner of...
Read more
Food & Leisure

Is your child artistically gifted? Does he or she have a strong creative streak? Obviously, this is a good thing, even a blessing. Still, parents should stay on alert: Creative people suffer terribly for their art.

That’s the sobering message of Kay Redfield Jamison’s biography, Setting The River On Fire, of the poet Robert Lowell. Jamison, the author of best-selling books on mental illness, may be too attached to her subject. She is married to a man whose ancestry is part of the formidable Lowell family tree. Setting The River On Fire is part biography and part meditation on creativity and sanity, with the latter, all too often, losing out.

Jamison declares Lowell’s life a success. He died of a heart attack in 1977 at age 60. He was also a prolific, award-winning poet, the successor to his fellow New Englander, T.S. Eliot, as a master of modernism. Lowell was an only child of parents who could be both cold and indifferent. Along with hereditary problems (Lowell’s grandmother went insane), this was a source of the poet’s madness.

Also in the family tradition, Lowell was remarkably ambitious (another source of anxiety), determined, at an early age, to be the Great Poet of his time. Along the way, the man had some luck. As a youngster, Lowell was already being treated for depression. His physician was a gentleman named Merrill Moore. That mattered significantly.

Moore, a native of Columbia, TN, was a member of the Fugitives, a group of students, professors and poetry lovers at Vanderbilt University who met on Saturday evenings in Nashville to discuss poetry and to critique each other’s verse. That fraternity spawned the careers of John Crowe Ransom, Allen Tate, Donald Davidson, Robert Penn Warren, Andrew Lytle and Laura Riding. Moore was a prolific author of sonnets (tens of thousands of them!) who ended up with a psychiatry practice in Boston. Moore referred the young Lowell to Ransom, who then was a professor at Kenyon College in Ohio. Ransom, in turn, introduced Lowell to Tate, who was living on a “throwed away” farm in middle Tennessee with his wife, Caroline Gordon, herself an accomplished novelist. Lowell was so enthused by the opportunity that he turned up on the Tates’ doorstep with a sleeping bag, offering to sleep outdoors just so he could study at the feet of the writing couple. 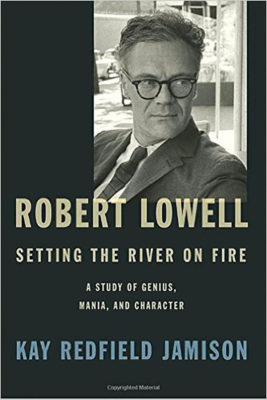 At Kenyon, Lowell studied with Ransom, by then a leading poet/critic and the editor of The Kenyon Review, a journal that had made little Gambier, Ohio the literary capital of the United States. Lowell also had the young Peter Taylor, himself a prize-winning short story writer, as a classmate. These mentors and classmates all inspired a young writer who needed little pushing, but Lowell was in the right company.

Jamison, correctly, considers “For The Union Dead” Lowell’s greatest poem. In 1960, Lowell read the poem with its famous lines—On a thousand small town New England greens/the old white churches hold their air/of sparse, sincere rebellion; frayed flags/quilt the graveyards of the Grand Army of the Republic—to a crowd of 1,000 at Boston Commons. (Poetry still mattered then.) The Tate-Lowell connection is obvious. “For The Union Dead” complements, rather than answers, Tate’s “Ode To The Confederate Dead.” Both address the question of pietas amid the ravages of modernity. In Tate’s poem, a New South businessman visits a Confederate cemetery without ever comprehending the enormity of the situation. Lowell’s poem, likewise, curses the “yellow dinosaur steamshovels” digging up a Boston landscape near the legendary Robert Shaw Civil War monument. Can the past survive? Neither poem is particularly optimistic, even though Tate’s “rumors of mortality” offers up a more tragic view than Lowell’s grouse about a material world gone overboard.

Lowell’s life and art was a success. Beginning in the mid-1940s, the poet suffered an outbreak of mania on a yearly basis. Lowell fell victim to bouts of delusion, fancying himself as a great man in the Napoleonic mode, while being unnecessarily abusive to loved ones and yet, he always battled back. Sobering statistics aside, Jamison may be overstating the case of creativity and insanity. One can be productive, while living a long and normal life. Mental illness may not be fatal to the creator. Creative people need to be reminded time and time again that their art is not their life.

Lowell’s first wife, the novelist Jean Stafford, had her own drinking problems, which made that union an impossibility. However, Lowell’s second wife, the critic Elizabeth Hardwick, truly cared—and even pitied—her husband. (Full disclosure: This reviewer had Miss Hardwick as a graduate school teacher back in the mid-1980s.) All Lowell ever needed was right in front of him. Sadly, it wasn’t enough. Lowell was intensely involved in the 1960s, opposing the Vietnam War and marching with Norman Mailer at the famous 1967 antiwar march on the Pentagon.

When that decade ended, Lowell seemed burnt out. The thrill of living in modern America was gone. He left the U.S. and took a professorship in London, where he promptly divorced Miss Hardwick and married a young Englishwoman. That didn’t work, either. The poet simply could not escape those yearly mania attacks. The physical burden alone wore him down. In Lowell’s case, a life lived to age 60, one that produced a thick body of work, was indeed heroic. But the tragedy was that Miss Hardwick’s love couldn’t save him.