Over the past decade, it has been no secret that veterans’ organizations like the Veterans of Foreign Wars, AMVETS and the American Legions across the nation are dwindling, disbanding and closing their doors permanently. The Manhasset American Legion Post #304 is not immune to the effects of a shrinking membership base and financial stability.

Although the veteran members’ service to God and country in the Manhasset community is alive and well, the pandemic over the past 15 months has only accelerated the realities for the Manhasset veterans.

“In the old days, membership was definitely in the 300s,” said O’Brien. “I’ve been involved for about 10 years; we were at approximately 200 members when I began, but are down to about 84 members.”

This is the present state for all veterans’ organizations.

“It’s a trend, not only on Long Island and in New York, but across the country, it’s a big problem,” said O’Brien. “So many members, especially the World War II and Korean War, are passing away at a pretty high number.”

He said the Manhasset Post still has one member who is 96 years old.

“It’s hard to recruit new members,” said O’Brien. “A lot of the active members are from the Vietnam War era.”

The Manhasset Post remains active in the community and for veterans’ causes across the state and Long Island. One of the earliest service commitments of the Manhasset Post is to the Northport VA and continues to be high on the list for its veteran members and auxiliaries (the American Legion Manhasset Auxiliary, Junior Auxiliary and Sons of the American Legion). Service to Beacon House remains a high priority for the Manhasset members, providing monetary, clothing and household donations, as well as gifts for Long Island veterans’ children during the holidays.

Some of the other prominent service projects which the Post and its members are committed to are: Boys State (sending four candidates through the program each year), Empire Girls State, Americanism and flag etiquette with the elementary schools, sponsoring two community Little League teams, scholarships to St. Mary’s and Manhasset high schools and hosting Boy Scout Troop 97.

One of the Post’s major annual programs is called “Law and Order” and is part of a National American Legion program. Each year at the March meeting the Post recognizes members of the Manhasset-Lakeville and Plandome fire departments, the Nassau County Police, the Nassau County EMT, and the New York State Police for their outstanding service to the community. A description of some of their outstanding acts is given and the individual or team is presented with a plaque.

“It is our most highly attended meeting of the year by both members and outside groups,” said O’Brien. “Those being recognized are supported by their supervisors, family and co-workers or co-volunteers.”

“We are having our parade on May 31,” said O’Brien. “We will march down Plandome Road, just like we have done since I was a little kid here.”

He said the procession will lay a wreath at Mary Jane Davies Park in memory of Manhasset’s war dead, before disbanding for safety protocols. This year’s ceremonies will not continue to the high school for awards and its usual memorial service. The public is still asked to be masked and maintain social distancing.

“Everyone is gratified that we are going ahead with this and that the town granted the permit for the parade,” said O’Brien.

The Manhasset Post, in conjunction with other American Legion posts across Nassau County, will have a memorial service at Eisenhower Park within a couple of weeks in order to memorialize those who have passed away during the past year. 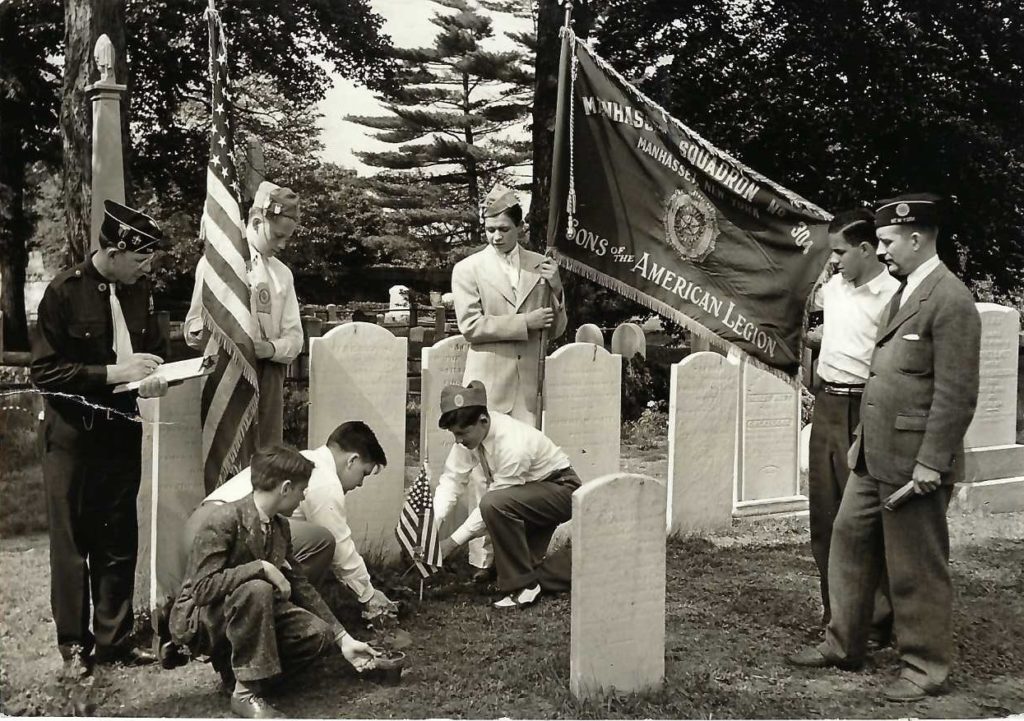 The members also flag graves with the Scouts at Christ Episcopal Church at Plandome Road and Northern Boulevard and at Long Island National Cemetery in Farmingdale.