Make It, Don’t Fake It: Leading with authenticity for real business success 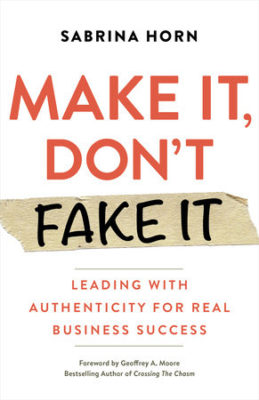 Horn founded and ran a publicity agency in Silicon Valley and in New York for more than 25 years, one of the only female CEO’s in the tech industry in the 1990s.

“I made a lot of mistakes and say a lot of fakery,” Horn said. “My book aims to help entrepreneurs and execs run their businesses with integrity and resist the temptation to fake it till you make it, which is just the worst business advice ever.” “Fake it ‘till you make it” has become gospel in our cultural playbook, but it ultimately doesn’t work and can have devastating consequences. If we really want to succeed, shouldn’t we push ourselves to “make it” with integrity? Won’t we gain far more by facing reality, even when it’s hard?

In Make It, Don’t Fake It: Leading with Authenticity for Real Business Success (Berrett-Koehler Publishers), C-suite advisor, entrepreneur and communications expert Horn gives leaders the tools to resist “short hacks,” and the courage to lead with authenticity and integrity.

It’s not as simple as just being a good person and having morals. Driven to succeed, entrepreneurs and executives—almost anyone moving up the corporate ladder—can be tempted to exaggerate or minimize the truth, only to sabotage their own success and destroy their reputation. So instead of digging yourself out of a hole with damage control, why not steer clear of fakery by taking the path to real leadership, an authentic foundation and enduring success?

Horn shows us how by writing from two valuable vantage points: as a leader in public relations–a profession known for its spin—and as a CEO of her own national firm. She draws on 25 years of insights and stories to show how we can flip fakery into authenticity to reap greater rewards.

Horn’s fake-free advice includes lessons in:
• Dealing with the harsh truths of a crisis, like facing layoffs, tragedy and the unthinkable and why sometimes “making it” means just surviving.

• Making false promises to customers and investors you can’t keep and then losing it all.

• Fighting the feelings of impostor syndrome and loneliness that come with leadership and becoming more resilient through humility, empathy, mentorship and self-assessment.

• Getting the confidence and clarity to make sound business decisions, even when there are no “right” answers and you’re surrounded by problems and the unknown.

In this so-called ‘post-truth’ world, even the best of us need guidance to make the right move when the going gets tough or when we’ve landed in hot water.

Horn is an award-winning CEO, C-suite advisor and communications expert. With only $500 and five years of work experience, she founded Horn Group, a public relations firm that for a quarter century, advised thousands of executives and their companies—from the hottest startups to the Fortune 500. She’s written for publications including The Wall Street Journal, Inc., Chief Executive Magazine, Entrepreneur, Forbes and CMO.com.

As a young executive, Horn learned about leadership on the job through two lenses: one, as CEO running her firm, the other, as strategic advisor guiding her clients through their own unique challenges. Facing countless difficult situations, crises, even failure, she came to understand that leadership is about making the right decisions at the right time based on the often very harsh, realities of the truth. Through her journey, she learned that there are no short cuts to achieving long-term business success. Still, she confesses to having made many mistakes and now in her first book, she shares what she learned about how to make it without faking it.

Horn Group became one of the most enduring, iconic brands in the tech world, with multiple offices in the U.S. and global reach. It received national acclaim as a Top 10 U.S. Independent Tech PR Firm, best U.S. employer and best U.S. Tech agency, among other accolades for excellence in service and creativity. In 2015, Horn oversaw her firm’s successful acquisition by Finn Partners, a global marketing company.

Today, Horn is CEO of HORN Strategy, LLC, a consultancy focused on helping entrepreneurs and CEOs navigate the early stages of their businesses. She serves as an advisor and board member and is a frequent speaker at industry forums and leadership conferences.
Horn has a BA in American studies from Hobart and William Smith Colleges and an MS in public relations from Boston University. She has two daughters, Grace and Christina, two extremely large golden doodles and splits her time between New York and San Francisco.