The Lyrical Genius That Is Rodney Crowell

Rodney Crowell is a storyteller. Sure, he’s got a resume a mile long that includes a couple of stints as a key member of Emmylou Harris’ Hot Band, a couple of Grammy wins, nine Country top 40 hits (including a quintet of chart toppers) and a number of commercially successful versions of his songs by a number of other artists including Bob Seger, Crystal Gayle, Johnny Cash and Jerry Reed. He even had his former father-in-law Johnny Cash cut his material. But in the end, what this respected singer-songwriter does is tell stories.

And given that he’s pushing 68, his more recent fare, including last year’s Close Ties, which features the Grammy-nominated “It Ain’t Over Yet,” find him dipping into recent personal history that’s resulted in some of his finest work. For the Texas native, it’s a process that he admits evolved for him in recent years, particularly when he’s asked about the inspiration behind his current collection of songs.

“Inspiration is that I even make records. I write songs all the time. Inspiration comes from hard work,” he said. “It’s not the same when I was 23 writing songs and they would just overtake me and I’d have to write them down and get as much as I could. The last 25 years, I just work at it, day in and day out.” 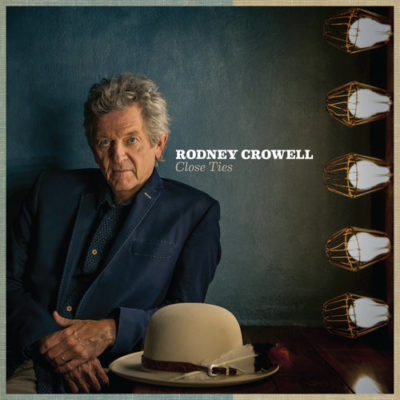 The 10 songs that make up Crowell’s fifteenth studio album are a fascinating insight into a rich past that finds him sharing a slice of what life was like when he arrived in Nashville, mistakes he’s made in his life and nods to important people in his life who’ve passed. One person who stands out is the late Susanna Clark, the wife of Crowell’s mentor and old friend Guy Clark, who died in 2016. While Susanna’s name was not an unknown commodity in the Americana music community, Crowell’s close relationship with her revealed someone who was not only a major inspiration to numerous now-famous singer-songwriters, but someone who struggled with mental health issues right up until she died from cancer on June 27, 2012. It’s a story he tells well amid the mid-tempo mournfulness of “Life Without Susanna.”

“‘Life Without Susanna’ is based on a 40-something-year friendship with Susanna Clark. She was the woman behind a bunch of men and women including Guy Clark, Townes Van Zandt and people like me and Steve Earle. I know Carleen Carter and Rosanne Cash were also under her spell for a while, so it wasn’t only men. But it was a tragedy and everything in that song is the way it went down,” he explained. “She was my close friend. When we were young, early in Nashville, she was young, vibrant and was a poet and painter who lived like an artist and that was inspiring. But she also grew progressively agoraphobic.

After Townes died, she basically took to her bed and the last 10 years of her life I spent trying to get her out of bed and trying to get her to get up and paint and to be who she was. But it couldn’t be done, so that was really frustrating. When she died, I decided to paint a picture of her the way I paint. I realized that if it was going to be a love song about a friend, I was going to make it exactly how I felt in the latter part of our lives. There’s a little bit about the first time I met her in the chorus. That song was torn from the pain in my heart.”

Crowell’s ability to take a hard look at his life also manifests itself in “I Don’t Care Anymore,” a brutally honest slice of self-assessment that finds him singing “I don’t care anymore about the fortune and the fame/I was better off before I tried to make myself a name.”

Elsewhere, the listener gets to hop on a time machine, where we hear Crowell share insight about the mid-1970s Nashville on ruminative “Nashville 1972” where he share lines like, “Now there was this run down shack on Acklin Avenue/That I shared with Skinny Dennis/And a poet name of Richard Dobson who had a novel he’d never finish/That’s when Johnny Rodriguez, David Olney and Steve Earle first came through/And every guitar bum whose name I never knew.” When it’s mentioned that this particular Nashville era sounded like the early 1960s Greenwich Village folk scene, Crowell countered that it was more like Jazz Age France.

“We actually talked about that. I lived in a house with Richard Dobson, rest his soul—he passed away recently, and Skinny Dennis Sanchez. Richard fancied himself a literary [sort]. He had the tweed coats with the elbow pads and he carried himself kind of like Ernest Hemingway with a guitar. And he was constantly saying that we were living like Paris in the 1920s,” Crowell recalled. “If that’s the case, then Susanna Clark was a raven-haired Gertrude Stein. The reason she was a muse was that if you got a good song, you’d wait for a gathering at Guy’s house or the house that we had and then you’d show off your songs. But really, you showed them to Susanna and if she thought they were worthy, you kind of got knighted a little bit. The beautiful thing about it is that nobody had money on their mind. Somehow we all ate, were clothed and had a roof, but nobody ever spoke of money. It wasn’t even a consideration. It was, ‘how is the work going?’”

Currently on the road with Australian finger picker Tommy Emmanuel, Crowell is performing solo and, “[having us be] singer-songwriters and whatever particular songs are going to be up for me that night will be what the audience gets.” As for knowing when he knew that being a professional musician was going to be his lot in life, Crowell pointed out there was never another option.

“[Music] is what I was born to do. There’s nothing else I can do. I can do volunteer work—I guess I could become a male nurse. The way I see it, this is what I was born to do,” he said. “Besides getting out in the yard and playing as a kid, all I remember is music. It was like that cartoon where the cat floats away from the smell of the catnip—that’s what happened when I heard music. I just floated away.”