How a Farmingdale teacher gives back to kids with cancer Tracy Vicere is a survivor. What else would you call someone who beat both Hodgkin’s...
Read more
Arts

The most popular night to celebrate music looks like it might have to wait a little bit longer. It was just announced that due...
Read more
TOP STORIES

Two hundred and forty million. That’s the number of calls Americans make every year to 911. And if you ever wondered what happened inside those call centers, wonder no more. ABC’s brand new show Emergency Call, which is hosted by actor Luke Wilson, will give viewers a first-hand look at the dramatic moments that lead up to the arrival of help rather than the events of what happens after firefighters, police or emergency medical services teams arrive. The hour-long episodes will focus on the extreme, suspenseful and sometimes humorous stories that flood 911 call centers.

“Earlier this year, the producers got in touch with me and just wanted to see if I was interested in it,” Wilson said about how he became involved with the show. “For me growing up, my favorite section of The Dallas Morning News was always the metro section, which is part of the paper that dealt with not just crime, but car crashes and different things like that. I was always interested in where something happened, what time something happened, their name and their age—all that kind of stuff. It was always a short paragraph or just four sentences and I would always wonder what the rest of the story was. I was always into that and was just more focused on the police. You see shows about the police and firemen growing up, but you never thought about the call takers. When I started talking to the producers of the show, I thought, ‘Wow. This really ties back into that’ and it was just something I never really thought about. You never really see the people who are the first link in the chain of first responders.” 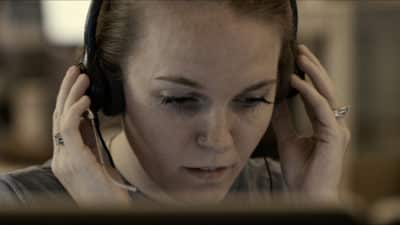 In the first episode, the show chronicles heart-pounding stories about rising flood waters in New Orleans that suddenly have people stranded on a highway inside their cars, a teenager’s scary encounter with a bear who is stalking her through the Alaskan wilderness, a granddaughter being coached through the phone on how to perform CPR on her unconscious grandfather, and more.

“Viewers will get a really good glimpse of what the people are like who take these calls,” Wilson said. “What struck me the most was how sharp these people are in terms of multi-tasking. They’re not just getting your address and what happened. A lot of times they’re having to calm you down and it’s difficult to just get the address. One of the funny things these call takers said is that people would be surprised when you ask someone where they live and they say, ‘It’s the blue house on Wall Street’ and then they hang up. And I saw that happen multiple times where it’s a domestic disturbance and someone would say the street they live on and hang up. This one call taker had a funny thing where she said if someone is over 40 and she’s having trouble getting their address, she’ll tell the caller if she was going to send a letter to the caller, where would she send it and then the caller gives her the [actual] address. So they figured out these shortcuts to get the facts of exactly where someone lives.”

So why is a show such as Emergency Call important to have on television? 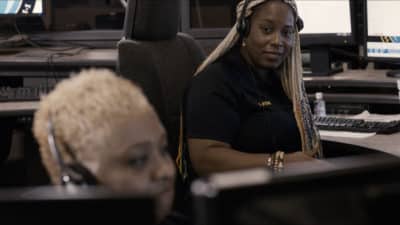 “When I would visit these call centers, there would be these little lulls and I’d get the chance to have these good talks with people where they’d say that people just don’t call 911 because they’re having a good day. I hope people will get a sense of how great and sharp these people are, and also how empathetic they are. I’ve heard these crazy action packed calls and then I heard a heartbreaking call where a couple of weeks ago I was down south of LA in a call center and a woman called with Alzheimer’s and this incredibly kind call taker talked to this woman, who didn’t know what year it was or where she lived. My heart kept breaking and this call taker kept talking to this woman who would get suspicious and would ask, ‘Why are you asking me all these questions?’ Having people with this disease, I knew exactly what the call taker was dealing with and how daunting a task it is. There’s these action packed calls that we have on the show, but there’s also these touching calls where you realize they [call takers] really are a part of the community.”

Besides being host of Emergency Call, Wilson has established himself as of one of the most versatile actors of his generation with his indelible performances in broad comedies, thoughtful dramas and provocative independent features. Some of his credits include Wes Anderson’s Bottle Rocket, Rushmore, and The Royal Tenenbaums; The Skeleton Twins opposite Bill Hader and Kristin Wiig; Old School with Will Ferrell and Vince Vaughn; the Legally Blonde franchise with Reese Witherspoon and more. In 2005, Wilson wrote, starred in, and co-directed with his brother Andrew Wilson, The Wendell Baker Story, alongside Eva Mendes, his brother Owen Wilson and Eddie Griffin. In 2018, Luke won an Emmy for his work producing the documentary film Tower.

“I was just always into movies, actors and directors and that’s kind of what I was drawn to from being a kid,” Wilson said about how he became an actor. “I don’t know if it weren’t for my brothers and Wes Anderson that I would have moved to New York to study acting. I was just lucky enough to hook up with these really smart creative guys that we started making short films together and writing. It was something that I was really interested in, but it could have very easily been one of those things that had I been a little older and not had those guys, I probably would have drifted away from it.”

So what is next for Wilson this year and for 2021?

“I have a great period football movie called 12 Mighty Orphans and that’s finished and should be coming out in 2021,” Wilson said. “We’ll figure out how and where people can watch. I would imagine it will be an on-demand type movie. Next month, I go back to work on DC’s Stargirl for my second season of that, which I’m really excited about.”

You can watch Emergency Call Mondays at 10 p.m. ET on ABC.