Once again, the New York Mets have named a new manager. This time, it’s a familiar face within the organization, a man who looks to continue his family’s legacy.

Luis Rojas, son of former MLB manager Felipe Alou and brother of ex-outfielder Moisés Alou, was officially introduced as New York’s manager heading into the 2020 season. Rojas replaces Carlos Beltran, who split with the Mets on Jan. 16, less than three months after he signed a multi-year deal to lead the club.

“It’s a proud day for many of players, many of whom will credit Luis for their major league success,” general manager Brodie Van Wagenen said. “The organization watched him grow and watched him practice with purpose. He’s a consistent person and he has a consistent presence and demeanor.”

Rojas has plenty of experience with the Mets, coaching the organization’s minor league clubs since 2011. The 38-year-old was promoted to work with the major league squad in 2019 as a quality-control coach. 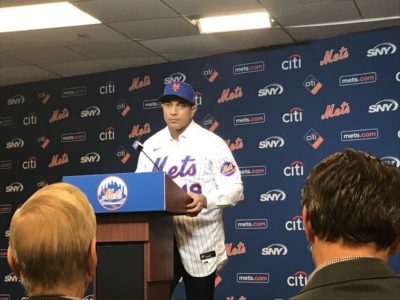 Throughout Rojas’ time with single-A and double-A Mets teams, he helped developed several players who are currently on the major league roster, including reigning Rookie of the Year Pete Alonso, Jeff McNeil and several others.

“It’s awesome playing under him and having him on staff last year as well,” Alonso said on Twitter.

And Rojas is just as excited to lead the players he has known for several years. That, along with Rojas’ ability to help Beltran get situated with the organization, impressed Van Wagenen and the rest of the team’s front office.

“I’m very excited,” he said. “It’s great that I know them, but it’s even better that they know me better. It’s going to help us click even quicker.”

Rojas joined the Mets in 2006, learning about the organization in the Dominican Republic. He slowly worked his way through the team’s rankings as a young manager, first as the Dominican Summer League in 2007 before joining the Gulf Coast League Mets a year later. Overall, he had a 555-477 record in the minors.

“Loved being around him on the bench last year,” pitcher and Long Island native Marcus Stroman said. “Always teaching and full of knowledge. Super laid back and brings nothing but great vibes each and every day. Beyond even keel. Excited even more for the year.” 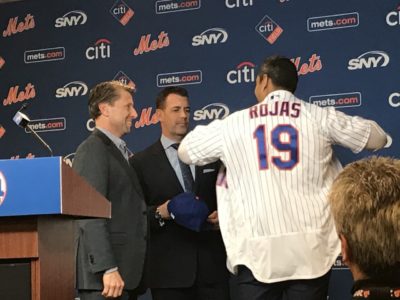 Beltran, 42, was the only player to be named in MLB Commissioner Rob Manfred’s report on the Houston Astros’ sign stealing scandal, which was released two weeks ago.

“We met with Carlos last night and again this morning and agreed to mutually part ways. This was not an easy decision,” a joint statement on Jan. 16, from Mets COO Jeff Wilpon and General Manager Brodie Van Wagenen said. “Considering the circumstances, it became clear to all parties that it was not in anyone’s best interest for Carlos to move forward as manager of the New York Mets.

“We believe that Carlos was honest and forthcoming with us. We are confident that this will not be the final chapter in his baseball career. We remain excited about the talent on this team and are committed to reaching our goals of winning now and in the future.”

The commissioner’s report specifically named Beltran, who was a key member of the Astros’ 2017 World Series victory.

“Approximately two months into the 2017 season, a group of players, including Carlos Beltran, discussed that the team could improve on decoding opposing teams’ signs and communicating the signs to the batter,” Manfred’s report said. “[Alex] Cora [then a bench coach for the Astros] arranged for a video room technician to install a monitor displaying the center field camera feed immediately outside of the Astros’ dugout. (The center field camera was primarily used for player development purposes and was allowed under MLB rules at the time when used for that purpose.)

“Witnesses have provided largely consistent accounts of how the monitor was utilized. One or more players watched the live feed of the center field camera on the monitor, and after decoding the sign, a player would bang a nearby trash can with a bat to communicate the upcoming pitch type to the batter.”