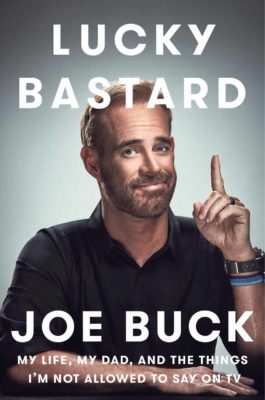 As someone who is the lead play-by-play announcer for both Major League Baseball (MLB) and the National Football League (NFL), it shouldn’t be a surprise that Joe Buck is one of the more heavily criticized broadcasters in the business. It’s something he’s well aware of and touches on frequently throughout his memoir Lucky Bastard: My Life, My Dad, and the Things I’m Not Allowed to Say on TV. While it’s easy to go into this book with preconceived notions about what Buck might be like, the way he and co-author Michael Rosenberg approached this project just might have you looking at the former differently. The tone taken throughout is candid, self-deprecating and most importantly, laugh-out-loud funny.

The Missouri native is well aware of the nepotism charge that’s often leveled at him given that his father was late Hall of Fame broadcaster Jack Buck. Or that Buck the younger became the youngest man to ever announce a regular slate of NFL games on network television when he was hired by Fox at the age of 25 back in 1994. Along the way, it’s revealed that Buck was the product of an affair, wasn’t initially keen about having Tim McCarver as a broadcast partner and knew actors Paul Rudd and Jon Hamm long before fame came knocking for that duo.

Along with gratuitous name-dropping (which he freely admits to) and anecdotes about not only having famous ball players like Stan Musial and manager Bruce Bochy end up being friends of the family, Buck comes clean about self-doubt and being a hair plug addict. Given that he opens himself to criticism on social media and through his regular full-time job, Buck’s willingness to put himself in such a vulnerable position is really admirable.

Throughout Lucky Bastard, Buck is honest about his shortcomings, comes off as a loyal friend, a great father and incredibly humble. It all winds up being a funny and refreshing read.