Although stores are struggling to keep their shelves filled with groceries due to the high demand from customers, which are are stock piling due...
Read more
News

The Long Island Aquarium is soliciting donations via GoFundMe to assist them during the coronavirus pandemic. The aquarium is currently closed to the public per...
Read more
TOP STORIES

Jake Carlock remembers watching his older brother playing football back when he was just a preschooler. It was the moment that football permanently entered his life.
“I got started playing it with all my best friends growing up,” said Carlock, a Babylon native. “We grew up in a football town, so we wanted to win the town a few games and we tried it out. The community is real tight.”

Carlock graduated high school with slightly more than 100 kids in his class. It was such a tight knit community that it felt like the whole town would come to games. And who wouldn’t when your team has a couple of players bound for Division I colleges?

“[The community] is real supportive,” said Carlock. “Every time I go home, I say hi to people and everyone reaches out to me. The principal, the school’s athletic director, all of those guys I’m close with.”

Carlock went on to play at Stony Brook at the Football Championship Subdivision (FCS) level before transferring to LIU Post, which played Division II football. However, Carlock didn’t have his love for football like he used to.

“I couldn’t really find my motive at Stony Brook,” said Carlock. “I decided to pursue education at LIU. I put my dream of going to the NFL in the rearview mirror to focus on school. But the season took over and I did well.”

Carlock had a phenomenal 2018 at LIU, racking up 67 total tackles, 11 pass breakups and three fumble recoveries as the team’s premiere defensive back. He was named Northeast-10 (NE10) Conference Defensive Player of the Year and garnered first team All-NE10 honors. He helped lead the team to a NE10 championship and he began to catch the eye of scouts at the pro level. 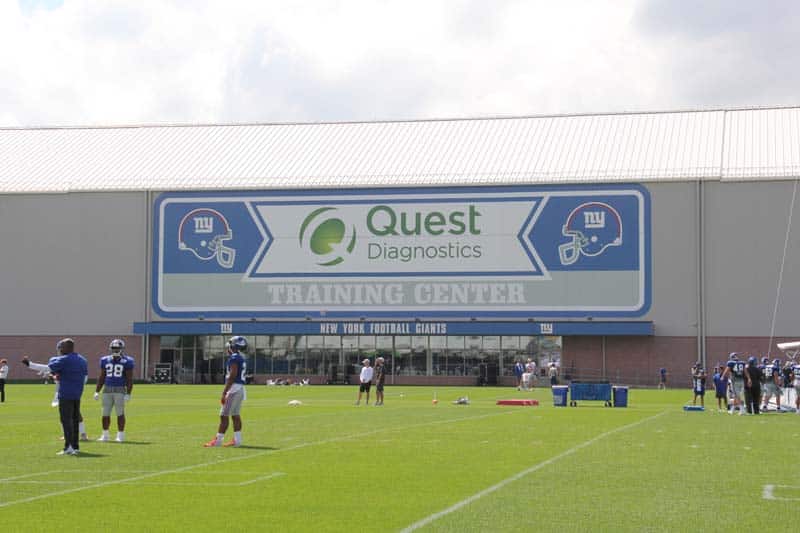 “I kind of knew something was going to happen after I graduated,” said Carlock. “I met with a bunch of teams before the draft. I was in talks with multiple teams to join them. I wasn’t too positive, but I had a good feeling.”

On the final day of the 2019 NFL Draft in April, during the seventh and final round, Carlock was surrounded by family when he got a call from the New York Giants. They offered him a roster spot.

“That was a really cool moment for me and my family,” said Carlock.

Just like the adjustments he has made his entire career, Carlock once again had to deal with the speed change at the professional level. However, he feels like he dealt with that well, even in a transition from defensive back to linebacker.

“I thought it was more fun than anything,” said Carlock. “But it is hard work. Camp is no joke. You got to get in here and get ready to work. You have to bring it every day because someone is going to try to take your job. It has been a cool experience for sure and I’m loving it.”

Carlock was with the team throughout the summer and got a chance to play in all four Giants preseason games. He never played many snaps, but he did get two tackles and a sack. However, his favorite moment was when he got an interception return for a touchdown against the stadium rival New York Jets.

“Once I got my shot in the preseason, it was pretty cool,” said Carlock. “I ended up playing pretty well. Ended up making a couple of plays. Once you step on the field, it’s still football. The crowd is a little bigger, but it’s still football at the end of the day.”

Unfortunately, like most undrafted free agents, Carlock was released by the team after the preseason. However, he was told to hang back because they were looking to add him to the practice squad. The NFL is allowed to have 10 players outside of its 53-man roster that consist of players that would come to practice every day but would not participate in the games themselves.

“Right now, I’m working on being a long snapper and trying to perfect that,” said Carlock. “And really, I’m just doing what they want me to do, give them a good look for whoever they’re playing each week and doing what I can to help them win on Sunday.”

Carlock does everything but suit up for games. And veteran players like long snapper Zak DeOssie have taken Carlock under their wing to get him ready in case the team needs him in game action this season.

“I do think I can play at this level,” said Carlock. “I don’t think they would keep me around if they didn’t think so too. I’m doing my part and staying ready for the games. I’ll be excited when it happens if I do get pulled up. But for now, I’m just doing my part. That’s what they brought me here to do.”

Carlock’s advice to anyone that is pursuing football out of a small school is to keep working at it because it doesn’t matter where you come from.

“I’ve heard it time and time again that it’s almost impossible to go from Babylon to the NFL,” said Carlock. “I’m still here. If you work hard, it doesn’t matter if you come from LIU or Alabama. If you want something, you can go get it. And here I am lining up next to guys who played at Alabama.”