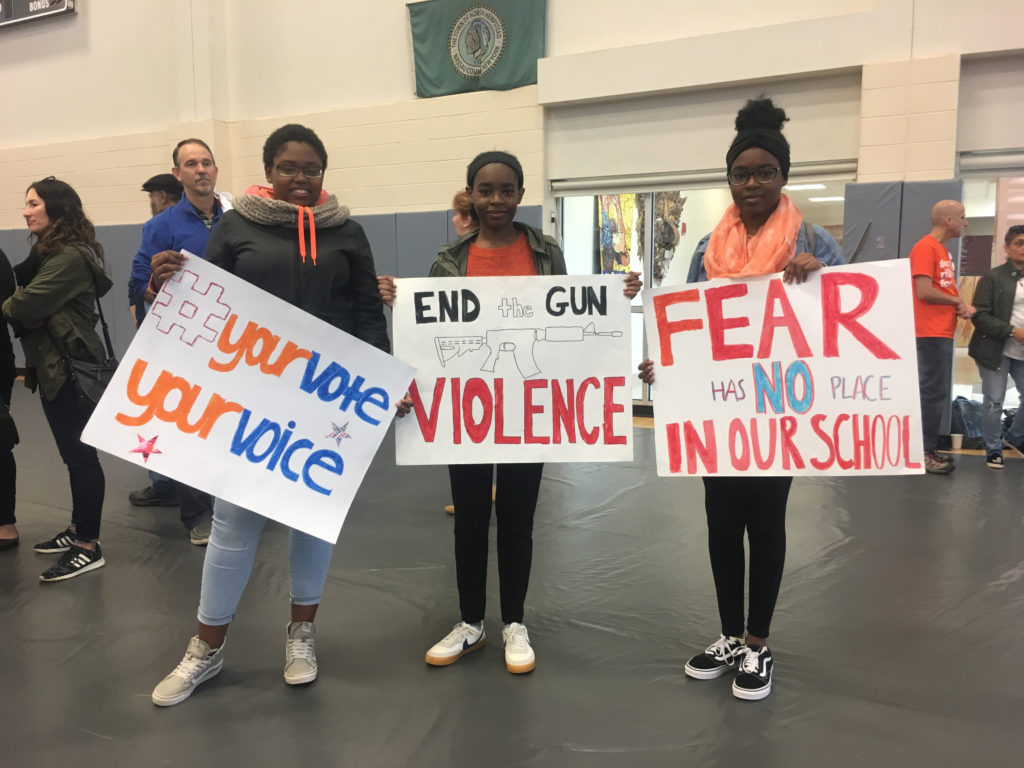 Locals affected by gun violence joined Representatives Tom Suozzi and Kathleen Rice at the “Yes We Can” Community Center in Westbury on Saturday at the Rally to End Gun Violence hosted by the Nassau County Democrats to vote with common sense gun laws in mind in the upcoming midterm elections.

Suozzi, who is up for re-election this year, said he is boggled at the little progress made in regard to gun safety legislation since the Columbine High School shooting.

“It’s hard for me when I hear stories of people whose families are victims of gun violence or have been present for shootings to imagine that something hasn’t been done,” he said. “We’ve been talking about this issue for so long and you think about the families that have suffered from this insane violence and we can’t change it?”

Rice, who is also up for re-election, boasted of her “F” rating from the National Rifle Association (NRA), but believes there is still room for bipartisanship when it comes to “gun sense” legislation.

“I know I have a lot of colleagues and friends on the other side of the aisle who if a bill came to the floor, they would vote for it,” she said. “But their leadership is preventing any common sense gun bills from coming to the floor and that’s why the leadership has to change.” 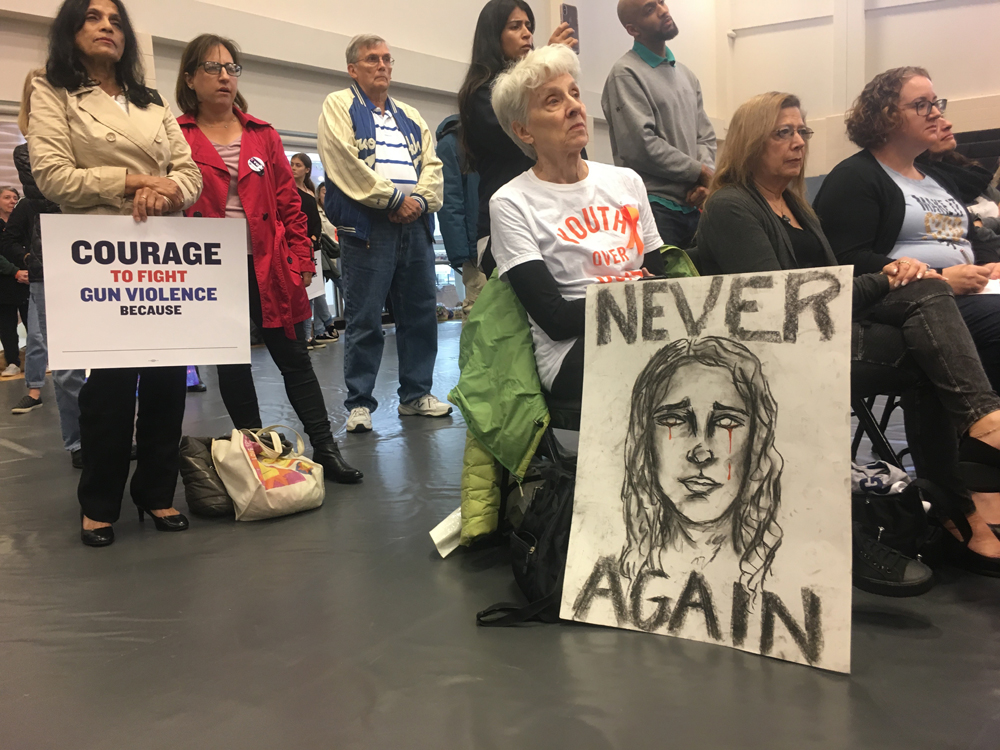 Anuradhasharma Magee of Greenlawn is also dumbfounded at the bickering amongst elected officials on the issue.

“I think I’m like a majority of this country that just cannot understand why we haven’t been able to legislate sensible gun reform at least to the point where people who shouldn’t be able to get guns can easily purchase them,” she said. “It’s just not something I would think my country would stand for in 2018.”

Magee, who is also a member of Suozzi’s “Heard in the Third” grassroots activism campaign, recognizes the challenges facing gun sense supporters in Congress.

“It’s very hard for Democrats to take the initiative when they’re not in power, even though there are Republicans who are also into the same issues,” she said. “I just fear that there are too many people in power who don’t want to sensibly legislate so the two of them are battling an uphill battle.” 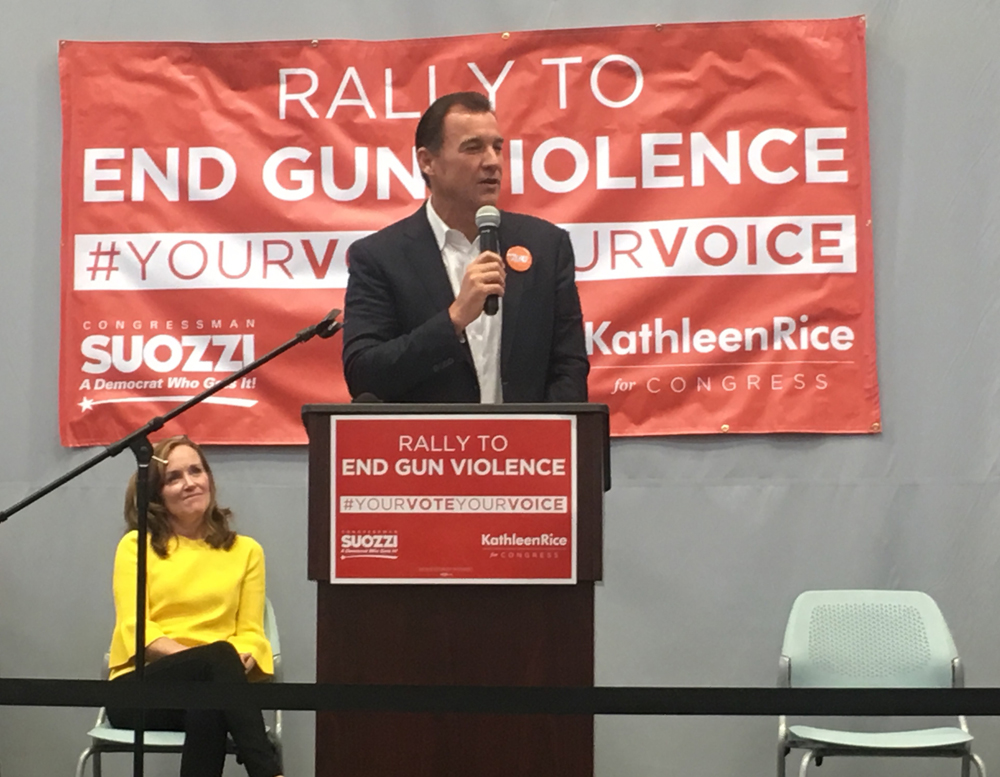 Those in the community that have directly felt the impact of mass shootings told the audience they turned their emotions following the events into a platform to raise awareness of what changes can be made to protect public safety.

Rockville Center resident Robert Gaafar, who survived the Las Vegas shooting last October, told the audience he is still coping with the trauma from the deadliest mass shooting in modern American history, but is using his experience to inform others of what they can do to prevent similar events.

“The sheer firepower released by a bumpstock should only be seen in a war zone and never in an American city,” he said. “I don’t want to live in a country where mass shootings have become as American as apple pie.”

Paul Guttenberg, a CPA from Commack, lost his 14-year-old niece, Jaime Guttenberg, in the shooting in Parkland, FL, earlier this year. He believes the right to bear arms can be held within reason, but that some elected officials have been listening more to the NRA than to voters concerned about gun safety.

“There’s room for the second amendment, but there also must be room for compromise,” he said. “This is so that we can keep our kids safe in school, keep people safe when they go to church, a concert or the mall, but that’s where we’re failing.”

Students present strived signals they are watching the actions of lawmakers now so they are prepared when they are able to head to the polls in the future.

Sydni Chester, a senior at Westbury High School who is also the vice president of the school’s Time for Action Organization, said elected officials need to be aware of the influence students have on the legislative process because they will be experiencing the impacts of their bills.

“You never know when gun violence might hit you, so it’s something that I take very seriously and that I don’t take for granted,” she said. “I want [elected officials] to know that we hear them and that our voice does matter, and not only the voice of the eligible voters, but those who are going through this time because we see the news and know what is going on.”

Suozzi channeled the awareness of students in his final message to those who can vote.

“You have a right to bear arms, but it doesn’t outweigh your children’s rights to be safe in school,” he said. “Democracy only works when the people act; don’t underestimate how powerful you are.”