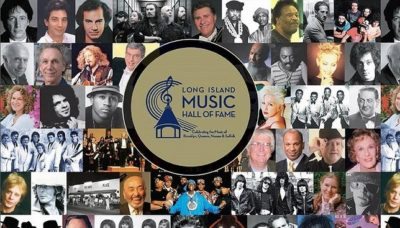 Given Long Island’s geographic proximity to New York City, it’s not surprising that the Big Apple tends to get more of the spotlight, particularly when it comes to music scenes. Battling this kind of cultural oversight was a major impetus the founders of the Long Island Music Hall of Fame (LIMHOF) had when the incorporated it as a nonprofit organization back in July 2005. A decade-plus later, the LIMHOF is getting ready to host its sixth induction ceremony on Thursday, Nov. 3, at The Space at Westbury. Further, after a few false starts, a museum/education center is in the process of being erected at the new Wyandanch Village Revitalization Project. All of which is a deep source of optimism for LIMHOF Third Vice Chairman Jim Faith.
“All of this has been accomplished with all volunteers for 11 years. So we’re kind of proud of the fact that we’ve gotten to a place where we’ve been involved having a couple of brick-and-mortar museums. A couple didn’t work out politically, so this one looks really good in Wyandanch. [Suffolk County Executive Steve] Bellone has been great and they’re really helping us out and really trying to make this happen,” Faith explained. “We’re also working on a mobile unit that will travel to all the high schools, Jones Beach, the Great South Bay Music Festival and Westbury. People will be able to walk through and get a taste of what our museum is like and learn a little bit about our history.”

Musician/songwriter/actor/producer Steven Van Zandt will receive the 2016 Harry Chapin Humanitarian Award for his Rock and Roll Forever Foundation and dedication to music education. This bi-annual award, initiated in 2010, is designated to individuals or groups that have demonstrated commitment to humanitarian efforts on Long Island and beyond. His foundation was initiated as a direct result of arts programs being eliminated in schools nationwide due funding cuts. The middle school/high school curriculum it presents—Rock and Roll: An American Story—provides arts-driven materials designed to keep students engaged and is available to educators at no cost.

“It’s an honor to receive the Harry Chapin Award,” Van Zandt said. “Though my work remains unfinished, I’m moved by even being considered to join the esteemed list of past honorees.”
With 2016 marking the 60th anniversary of Westbury Music Fair (currently operating as the NYCB Theatre at Westbury), the storied venue is also being recognized at this year’s induction ceremony. It’s an honor that’s most deserving according to Ron Alexenburg, an LIMHOF board member, inductee and legendary Epic Records executive, who had signed numerous artists including The Jacksons, Boston, Meat Loaf and Kansas.

“[Westbury Music Fair] was there from the beginning of artists performing on Long Island. It was always an accessible and available place for the artists to perform,” Alexenburg said. “Every time I go in there and see the pictures on the wall, it brings back phenomenal memories. Now we’re honoring the theater that allowed people to hear this great music.”
The Educator of Note Award is one of the other categories the LIMHOF includes that further celebrates Long Island public and private music educators. The 2015 and 2016 Educator of Note Award is designated to respected individuals who exemplify dedication to music education. Joseph Rutkowski is the 2015 Educator of Note recipient. With four decades of experience, he is the current head of the music department at Great Neck North High School and helms a music program that boasts 12 Carnegie Hall performances and is a 10-time winner of the Lincoln Center High School Chamber Music Competition.

The Educator of Note Award winner for 2016 is Frank Doyle, who not only toured and recorded as a keyboardist with Meat Loaf, but is a music teacher at Northport High School. Editor for the Barron’s AP Music Theory Review Book 2012 and the Journal of Music Theory Pedagogy Online, Doyle developed a four-year high school music conservatory program, including AP Music Theory and a two-year international Baccalaureate Program. This category goes hand-in-glove with home the LIMHOF has music education as a cornerstone in its mission statement.
“While we wanted to change the perception of Long Island’s music scene, we also wanted to someday have a museum, give out scholarships, have seminars and nurture the young and help them figure out how to get from point A to point B. Our main vision is to raise money to give away scholarships, build the museum and do what we want to do education-wise,” Faith said. “That’s what we’ve done. There are all volunteers until last year, when we hired our first executive director. It’s also why we give out the Harry Chapin Award, which doesn’t have to go to a Long Islander. It goes to people who have given back and done a lot. Steven Van Zandt’s foundation has done a lot on Long Island for young talent.

One look at the current and upcoming slate of LIMHOF inductees reveals a deep and wide expanse of creative diversity. Tony Bennett, Billy Joel, Run-DMC, the Long Island Philharmonic, jazz pianist Marian McPartland, The Ramones, classical composer Aaron Copeland, gospel star Donnie McClurkin, Dream Theater, Count Basie, Mariah Carey, Guy Lombardo and Cyndi Lauper all members of the hall and hail from different corners of the musical spectrum. It’s something Faith is proud of and says is a readily unique characteristic of his museum.

“Jimmy Webb was at our first event and he looks over and sees Twisted Sister, the [George M.] Cohan family, Johnny Maestro and the Brooklyn Bridge and Little Anthony,” Faith recalled. “He looks over and sees his idol Mose Allison, and he wrote a piece for The New York Times a couple of days later about the event. He said that where he comes from, there was mostly country but a little crossover and he said that he was at this party where there was what he called an embarrassment of riches because he saw his idol Mose Allison in the same company as Twisted Sister. He couldn’t believe all of the types of music that we’ve been able to put out there.”

The 2016 Long Island Music Hall of Fame Induction Ceremony will take place on Thursday, Nov. 3, at The Space at Westbury, 250 Post Ave. in Westbury. General seating tickets are now on sale, starting at $95 and are available through Tickemasteronline at www.thespaceatwestbury.com. Premium VIP table seating and sponsorships are available, which includes an exclusive VIP pre-induction awards dinner party, performances and awards ceremony.