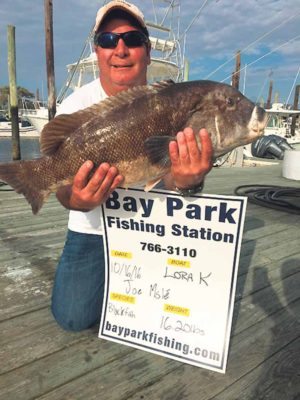 The nearly summer-like weather we saw this week has made it easy to get out on the water and led to some great fishing.

John from Hudson Park Bait & Tackle has found himself surrounded by giant blues being caught both from shore and boats. The fish are biting just about everything from poppers to swim baits and chunks of bunker.

”It’s almost more difficult to keep them off your line than on,” said John. The porgy bite has finally slowed down, but blackfish action has filled the void. There are still lots of shorts to weed through; however, some big fish mixed in are making it well worth the effort.

At Stella Maris, Stretch has seen a ton of action on the surface with blues and schoolie bass. They have been easy to find, as the birds are working the schools hard. Poppers and swimbaits are best for the bluefish, and if you can get to the bottom there are plenty of bass picking up the scraps. The best striper bite, however, has been at night on eels. Some boats have picked up a few fish while trolling bunker spoons and Rock Candy, but live-lined eels seem to work better. The blackfish are still mostly short, but the cooler weather this weekend should help wake up the keepers.

John, Sr. has seen explosive fishing all over the Kings Park waters. Blackfishing is off to a great start, although like most of the Island, the majority of fish are shorts. There are plenty of keepers to be found if you are willing to work through the throw-backs. Most action has been in just 10 to 20 feet of water, and the biggest catches have weighed up to eight pounds.

Sea bass are still around and very big, up to three pounds. The striper bite is widespread and in all the harbors. The fish are schooled up so thick you can almost walk across them. Big bluefish are still present, but it seems the bass are more than in control of the waters. Lots of bass are 20 to 25 pounds. The time to get out is now, whether from the surf or on a boat.

Ryan Schlichter
Ryan Schlichter is a columnist for Long Island Weekly blogs for On The Water magazine. Visit www.onthewater.com for more fishing forecasts for our waters and other regional fishing news.