This year Passover falls on April 11. And with the publication of For This We Left Egypt?: A Passover Haggadah for Jews and Those Who Love Them, seder will have the potential to add some levity to the ritual this year. At least that’s what authors Adam Mansbach, Alan Zweibel and Dave Barry are hoping for. According to Barry, (who’ll be appearing with Zweibel at Long Island LitFest 2017 on March 26 at Molloy College) Mansbach came up with the idea after having a little too much fun at a recent seder.

“According to [Adam], he was at a seder about a year ago and was thrown out for making jokes,” Barry explained. “He thought there was money to be made there, so he had this idea.”

And while Barry was the token gentile in this troika, his wife is a Juban (Cuban and Jewish), his daughter Sophie is being raised Jewish, and he’s been to his share of seders dating back to the first one he went to, when his Presbyterian minister father took up an invitation to attend a seder at his friend Dr. Marty Cohn’s home. 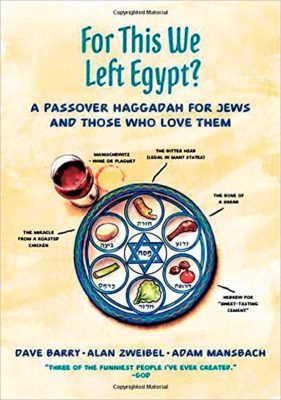 “When I was maybe 10 years old, my dad and Marty decided that we should all have seder,” the Armonk, NY, native recalled. “Marty was a lapsed Jew, so we went over to the Cohn’s house and I remember it was like conducting a science experiment because nobody could remember how anything was supposed to be done. I recall it took us between 11 and 12 hours to get through it, but we made it.”

In For This We Left Egypt?, the authors put twists on the holiday that range from getting rid of all the chametz (leavened foods) in your home with a kosher blowtorch and putting a Cinco de Mayo theme on your seder by swapping in tequila bottles for wine cups to taking at least 45 minutes to say goodbye to everyone.

Not unlike a traditional haggadah, the new book also reads right to left instead of left to right, a major triumph despite Barry’s concern that gentiles might be unaware that this is how it should be read.

“I do worry that the goyim will get hold of this book and read it left to right, and it will be a very tragic story where the Jews start out free in Israel and end up as slaves in Egypt,” he said.