In the annals of literature, there are numerous journalists turned novelists whose ranks include Mark Twain, Ernest Hemingway, Joan Didion, Susan Sontag and Carl Hiassen. Add Daily News columnist Linda Stasi to the list. The recent release of Book of Judas represents Stasi’s second full-length foray into fiction and is the follow-up to her 2013 debut, The Sixth Station.

New York City reporter Alessandra Russo returns in this Dan Brown-like story centered on tracking down the missing pages of the Gospel of Judas, a heretical manuscript that was unearthed in Al-Minya, Egypt, in 1970 and declares that Judas was the beloved, and not the betrayer, of Jesus Christ. And while Stasi had no intention of creating a sequel to her first book, certain signs pointed her down this path, beginning with the discovery of a copy of the 1977 Taylor Caldwell novel I, Judas in her Atlantic Beach home.

“I’m laying on the couch in our house in Atlantic Beach that we’d had for 12 years. I look up on this shelf, and there’s this book I, Judas. I never saw it before and I took it down. I asked everybody in my family if they had brought it and no one had, because it was 40 years old,” she explained. “I started reading it, and it was very interesting. A few days later, I was in Princeton, NJ, with my daughter and she insisted that we go to the Princeton bookstore. There on the front table, there’s a book called Reading Judas by Elaine Pagels, who is a scholar at Princeton. I thought ‘that was two Judases in two days, so I must be going straight to hell.’ It’s like he was calling me or something.” 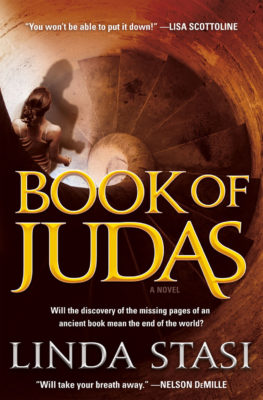 Intrigued by these recurring Judas omens and being an ever-intrepid reporter, Stasi started doing extensive research and discovered that a Gospel of Judas, which Pagels wrote extensively about, first came into existence about 2,000 years ago and had circulated on the black market before disappearing for decades. It eventually found its way into a safety deposit box in Stasi’s hometown of Hicksville, where the links between the subject and the author significantly strengthened.

“It turns out that this actual 2,000-year-old codex ended up in a Citibank in Hicksville on North Broadway—the same one where I got my first bank account as a kid and where my parents banked their whole lives,” she said incredulously. “Like the line goes in Casablanca, ‘Of all the bank branches in the world, you chose mine?’ So of course I had to write the book.”

In keeping with her journalistic training, Stasi embarked on what wound up being two and a half years of research. Whereas her first novel found her road-tripping with an exorcist priest from the Vatican and being escorted through parts of southern France by a motorcycle gang, Book of Judas had the Long Island native flying over to Israel, where she visited a 3,000-year-old burial site out in the middle of the desert. It’s this quest for authenticity that makes this 381-page tome such an intriguing page-turner. It’s an approach that most fiction writers don’t follow.

“A lot of my friends who are much better-selling authors than I am can make this stuff up. I can’t. I need to see it and I need to smell it. I approach it like a journalist, which is very time consuming,” she said with a laugh. “The first book took me six and a half years to write and it was really tough. I do this intense research. Nelson DeMille is a very close friend of mine and after the first book was written, I asked him what to do if I made a mistake or if something wasn’t right. He said, ‘It’s fiction; it’s not the truth.’ But I can’t even wrap my head around that because I’m a reporter.” 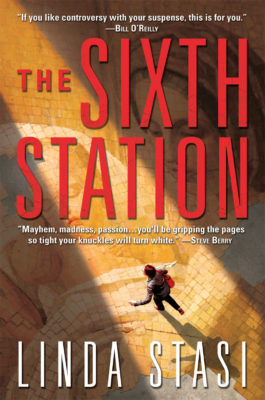 Stasi’s path to writing went from growing up in Hicksville, where she attended Old Country Road Elementary School and Division Avenue High School, to enrolling at New York Tech in Old Westbury and Hofstra University, eventually earning a degree in fine arts. A first job out of school landed her at Seventeen. Stasi eventually went on to become a columnist for New York Newsday, the Daily News and the New York Post before winding up back at the News, where she currently files two columns a week. And while being a columnist and novelist both center on writing, Stasi admits different skill sets are involved.

“The best part of being a columnist is that it’s like being a lion tamer in the circus—it’s always where you want to get to because it’s the center ring. To be able to opine and not just break the story is really a fun thing because I like to write funny,” she said. “As for the novelist thing, I did that because I couldn’t help myself. But man, that’s tough because it’s the exact opposite of what I do. I work for a tabloid, so I have to figure out how to say something in the least amount of words. When you write a book, you have to figure out how to say something in the most amount of words. It’s sort of like a singer learning how to be an actor. Just because you’re on the stage doesn’t mean you can do both those things. I feel so lucky that I have a career and craft that I get up every morning and I can’t wait to do, as opposed to feeling like I can’t wait to retire and get away from what I’m doing for a living.”