A Lifetime Burning In Every Moment

“The great American prose work.” That’s how Thomas Mann, the Nobel Prize-winning novelist described Thomas Wolfe’s 1935 novel, Of Time And The River. The heart of Genius is the editing of that mammoth manuscript and the friendship it forged between Wolfe (Jude Law) and his equally-legendary editor, Maxwell Perkins (Colin Firth). Of Time And The River was a best seller, a novel of wandering youth that critics compared with the best of Tolstoy, Dickens and Melville. Perkins remains famous as the editor and friend of F. Scott Fitzgerald, Ernest Hemingway, Ring Lardner and James Jones, among others. But the editing of that novel was the greatest challenge of Perkins’s long and productive career.

Genius vividly captures the force of nature that was this now-forgotten novelist. Wolfe, to quote T.S. Eliot, saw “a lifetime burning in every moment.” And he channeled that energy into a 3,000-a-word-per-day routine, that translated into four thick novels, three plays, two novellas, a hefty short story collection, five volumes of letters and two equally thick notebooks, all written in an 18-year period. The film takes the usual liberties. In one scene, Wolfe takes Perkins to a Harlem nightclub, where the novelist reveals that jazz inspires his own writing. Wolfe may or may not have listened to jazz, but that scene was Jack Kerouac talking. Another scene has Wolfe ragging Fitzgerald’s flailing work habits, while egging him on to do better work. In truth, Wolfe and Fitzgerald had an easy friendship. That dinner table harangue, similarly, was Ernest Hemingway at work. 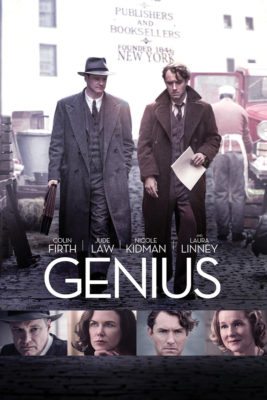 Was Wolfe a selfish man? Yes, all artists generally are. Their work takes precedence over friends, family, even a wife and children. Wolfe was the youngest of a boisterous family of seven children and he happily drew from the front porch drama to create many a dramatic narrative, even at the risk of making his own kin look foolish. Wolfe was consumed by his work, but he was not competitive. The movie would have been improved by showing the younger Wolfe teaching Wordsworth and Keats to those rowdy Irish, Italian and Jewish Lower East youth in a New York University classroom, where the then-unpublished novelist taught for a good seven years.

Opposites do attract. Perkins was the erudite symbol of WASP efficiency, a man who could patiently nurture such wounded talents as Wolfe, Hemingway and Fitzgerald, while building Scribner’s into the nerve center of early twentieth-century literature. Wolfe was the mad dreamer from the western North Carolina mountains, a writer who did not necessarily care about plot or form, but instead was determined to make “America”—every inch of it—the subject of a series of sprawling novels. Or as another great contemporary, William Faulkner, observed, Wolfe tried to do “the impossible…to take all of the human experience and turn it into literature.”

Who’s to say he failed? In the postwar era, Wolfe, along with Hemingway, was easily the most influential American novelist. Not just Kerouac, but William Styron, James Dickey, Norman Mailer, James Jones, Kurt Vonnegut and Pat Conroy all owed lifelong debts to Wolfe. Such novels as The Town And The City, The Naked And The Dead and From Here To Eternity would not have happened if Wolfe was not there first. Phillip Roth’s Nathan Zuckerman, the autobiographical hero of a string of novels, including American Pastoral, is also impossible without Wolfe’s Eugene Gant. The movie’s defining scene is when Wolfe has workers haul not one, but three crates full of twined-up manuscripts that would become Of Time And The River. Perkins simply picks up one of the bunched-up papers, loosens the strings and begins reading. One page down, 9,000 to go. The scene was the essential Max Perkins. And those three crates full of manuscript was also the essential Thomas Wolfe.