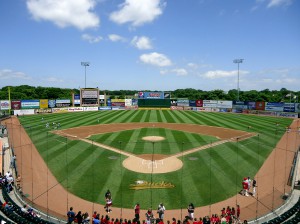 Thirteen of the 25 players on the Long Island Ducks’ 2013 championship team will be on its 2014 roster when the Ducks host their home opener on Friday, May 2, at Central Islip’s Bethpage Ballpark.
The Ducks will face the York (Pa.) Revolution at 7:05 p.m. that evening, but the gates open at 6:05 p.m., with the first 1,500 fans receiving replica championship rings, commemorating the Ducks’ 2013 title. Before the first pitch, a championship ring and banner-raising ceremony will be held to honor last year’s team. The Ducks also won the Atlantic League of Professional Baseball’s title in 2012.

“We’re here to win and to advance the careers of professional players who have found themselves on the outside, looking in, at Major League Baseball (MLB),” says Michael Pfaff, the Ducks’ president and general manager, a Manhasset High School and St. John’s University graduate who has been with the club since 2002.

Given their 140-game season, half of which is played at the 6,002-seat capacity Bethpage Ballpark, a deep, quality pitching staff is essential. Pfaff believes the Ducks are built to contend for another title, with a starting rotation that includes returning Ducks Bobby Blevins, John Brownell, Shaun Garceau, former reliever Jared Lansford and Matt Way.

The pitchers will be throwing to either catcher Brian Peacock, who spent 2013 playing for the Louisville (Ky.) Bats, the Cincinnati Reds’ AAA affiliate, or Keith Castillo, a catcher for 2013’s Montgomery (Ala.) Biscuits, the Tampa Bay Rays’ AA squad.

The starters in the infield include the first base/designated hitter platoon of Joash Brodin and Ryan Strieby, second baseman Cody Puckett, shortstop Dan Lyons and third baseman Chris McClendon, who has a career batting average of .303.

The upside to being a free-agent league is that the Ducks and their Atlantic League rivals have the ability to secure top-notch talent on short notice. The downside is players can easily move elsewhere, if a better opportunity presents itself. Quincy Latimore, for instance, looked as though he’d be starting his 2014 season in the Ducks’ outfield after being released by the Pittsburgh Pirates in spring training. Latimore was signed, however, by the Harrisburg (Pa.) Senators, the Washington Nationals’ AA affiliate, during the Ducks’ first day of spring training. An aside: 24-year-old Cutter Dystra, the son of former Met Lenny Dykstra, is the Senators’ third baseman.

The Ducks play in the Atlantic League’s Liberty Division, which includes the Bridgeport (Conn.) Bluefish, the Camden (NJ) Riversharks and the Somerset (NJ) Patriots. The Lancaster (Pa.) Barnstormers, the Southern Maryland Blue Crabs, the Sugar Land (Texas) Skeeters and York’s Revolution are in the league’s Freedom Division. Each of these teams has visited Long Island in the years since the Ducks, and Bethpage Ballpark, opened for business in 2000. The venue’s family-friendly setting has found an audience. If you’ve ever been to an MLB spring-training game in Florida, you’ll find the same positive vibe at the Central Islip stadium.

“At some point in late May or early June we’re going to welcome our six millionth customer,” Pfaff added, making the Ducks the first team in the Atlantic League’s history to achieve that milestone.