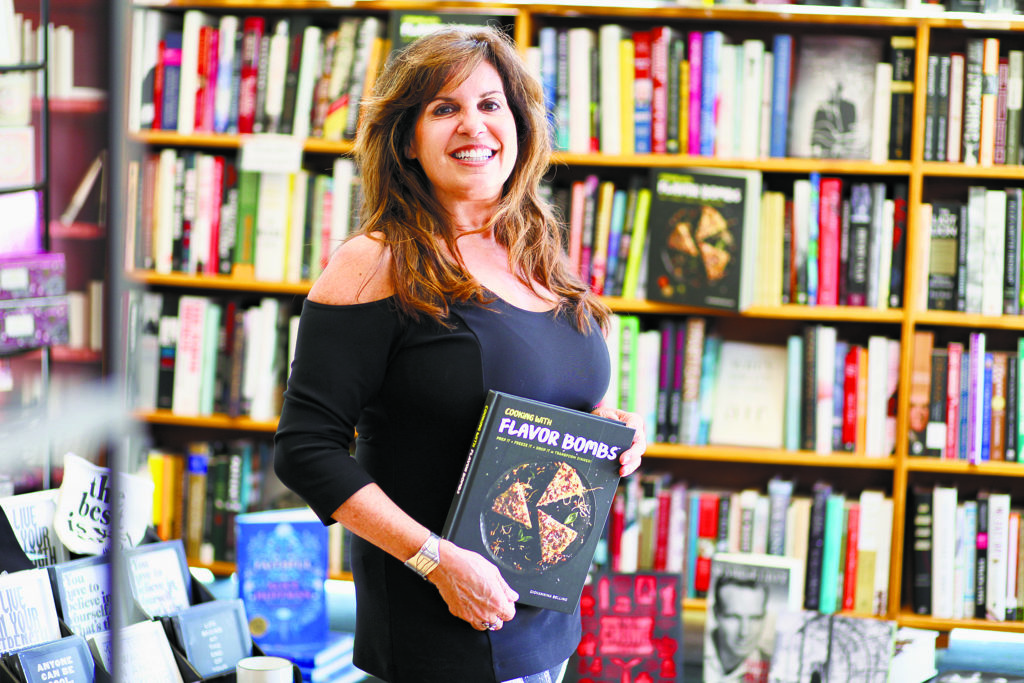 Long Island native and Port Washington resident Giovannina Bellino has worked at local events with her catering business, Goddess Gourmet, but now Bellino is serving up a new way of cooking with her cookbook, Cooking With Flavor Bombs. Bellino was approached by Quarto Publishing to create a cookbook after putting her Flavor Bomb products on the market, presenting the perfect opportunity for the Port resident to show the world how to create and use the blends of sautéed aromatics, herbs, vegetables, spices, stocks and sauces made in advance and frozen in ice cube trays for later use.

“I would make pestos and then freeze them in ice cube trays for cooking later on,” said Bellino, explaining how she created Flavor Bombs, the topic of her cookbook. “I thought that if this were a product, I would buy it. So I set out about five years ago to make this product. It’s sold in King Kullen and other stores. Quarto Publishing called me up one day and said they thought it would make an interesting cookbook. I have five flavors of Flavor Bomb in the market place, but when I got the book deal, they said they wanted me to develop another 10 flavors.”

Currently on the market is the Italian Soffritto Bomb, comprised of garlic, onion, parsley and basil; the French Mirepois Bomb, filled with carrots, celery and onion; the Basil Pesto Bomb; the Rosemary Pesto Bomb; and the Sage Bomb with shallots and pecans. After finding out that she had to come up with 10 more flavors, Bellino began researching flavor bases of various cultures and came up with flavors such as the Holy Trinity Bomb, which includes green peppers, celery and onion; the Thai Bomb, filled with lemongrass and ginger; the Umami Bomb containing mushrooms, miso and butter; and the Suppergrun Bomb of cabbage and leeks.

“The book explains how to make flavor bombs and recipes on how to use them,” said Bellino. “My product line is now a cookbook and I tell you how to make my product. It’s a great way for new cooks to learn some flavor profiles. If you’re an experienced cook, you may learn something new. In writing this book, I expanded my own palate by researching. I do an Indian Curry Flavor Bomb and I’ve learned to love curry and other flavors I hadn’t eaten. It’s a nice way for people to move beyond their comfort zones.” 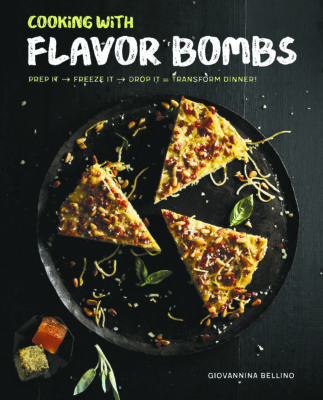 Flavor Bombs are not only meant to enhance the eating experience, but can make cooking more efficient, healthier and less wasteful. Buying Flavor Bombs or using the cookbook to create your own can help save time when cooking. With meal prepping all the rage, Flavor Bombs can be made on a Sunday night, allowing preppers to plan ahead without having to set aside the entire Sunday to cook full meals for each day of the week. Because many of the bombs have overlapping ingredients, cooks can have a few different bombs in an ice cube tray at once, allowing for different flavor bases each night.

“You can have fun with it,” said Bellino. “You can deviate from the recipes. People can really make it their own. Put them in ice cube trays or even dollops on wax paper and drop them in a bag and you have these great flavor bases to cook with. If you really want to make it, one of the easiest and most flavorful is the vegetable stock. When you want to make a sauce or sautee a veggie, or make different grains like quinoa, you can drop a few in and the flavor you get, it’s healthy and it’s a great one to start with.”

While healthy eating is a main concept in the cookbook, with all of Bellino’s Flavor Bombs being vegan, gluten-free and low fat, another topic Bellino focuses on is waste. Bellino sees Flavor Bombs as way to lessen waste and reuse parts of vegetables or sauces that went unused.

“The other part of the concept beyond the Flavor Bombs is that I give tips on if you make a chicken dish and love the sauce, freeze some before you serve it, put it in a container and add it to a different dish another night,” said Bellino. “You can do it with just about anything so a lot of it is that there is no waste. When I started catering Goddess Gourmet in 1994, I made a lobster oil and I’d put it in little glass bottles with a cork. When there was the Port Fish Market, they would sell it there for me and it was really cool. That was my first product, but the most important thing to me is that there is no waste.”

It took Bellino about nine months to create the cookbook that revealed the secrets to her products and showed cooks how they could use them. Cooking With Flavor Bombs came out on April 25 and is currently available at the Dolphin Bookshop, Barnes and Noble and on Amazon.

For more information about the new cookbook, visit www.flavorbombs.net.