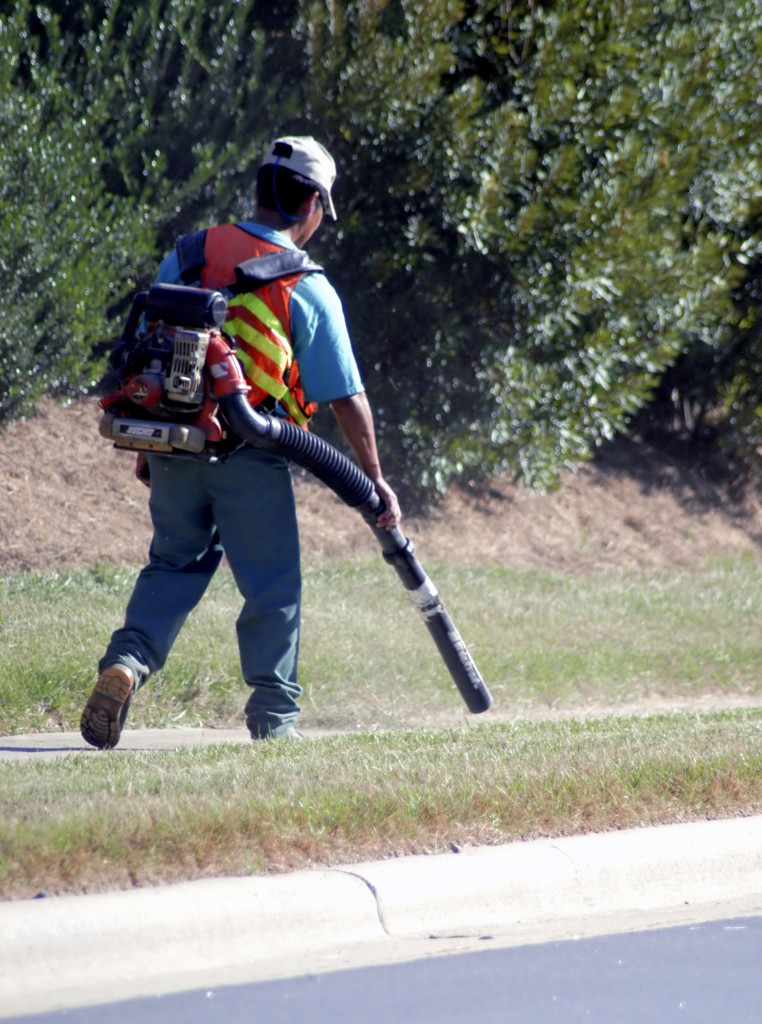 For over 40 years, gas-powered leaf blowers have been a focal point for irritation and frustration over neighborhood noise. The issue is percolating up all over the country again, and now it’s also about swallowing doody.

Gas-powered leaf blowers aren’t the only gardening and landscaping apparatus that use loud two-stroke engines (it takes two piston movements to complete one cycle of combustion), but it’s pretty easy to understand what lawn mowers and chainsaws do and why they are used. The purpose, efficiency and effectiveness as a gardening tool of using powerful blowers on a typical 50- by-100-foot property is more mysterious. Even the phrase “leaf blowers” is a misnomer.

They don’t blow just leaves. They blow everything that’s on and in and around your lawn into the air, where it lingers for hours until it settles onto the neighbor’s car and their kids’ faces. Mold, pollen, seeds, little rocks, dead bugs, live ticks, it’s all launched at high speed. The polite word for it is “fugitive dust,” but on the street we call it “rodent feces,” and worse.

In two-stroke engines, fuel is mixed with oil for lubrication, and about 30 percent of the mixture goes unburned and gets spewed out. That smell in the air after the gardener leaves is a mix of carbon monoxide, nitrous oxides and various carcinogenic hydrocarbons. In late 2011, a study by Edmunds.com, the auto information site, found that the hydrocarbon emissions from half an hour of yard work with a two-stroke Echo leaf blower generated about the same carbon monoxide and non-methane hydrocarbon emissions as driving the 3,900 miles from Texas to Alaska in a 6,200-pound Ford Raptor.

We know a lot more now than we did 10 and 20 years ago about allergies, asthma and the dangers of extended exposure to very fine particulate matter, which can penetrate deep into lungs, enter the bloodstream and harm the heart and other organs. This isn’t a joke.

The noise is a problem, especially for people with limited mobility who can’t easily escape, or for the mother who finally got an infant to sleep. Leaf blower noise seems particularly jarring, especially throttling up, and seems to carry unusually longer distances and penetrate walls and closed windows. But while most people perceive gas-powered blowers to be much louder than other machinery, it doesn’t always measure out in as convincingly, creating doubt about action and enforcement.

Even louder than a 115-decibel blower is the sound of a little kid coughing.

Some landscapers in my neighborhood have been buying even louder, larger and more inappropriate machinery. I frequently see workers sent out with no hearing protection, taught to gun up the throttle to maximum, always. Perhaps some business owners are trying to make a point.

One East End landscaper told the East Hampton Star that banning or regulating blowers was “the stupidest idea…If they don’t like the noise and people making a living…people should leave town and go somewhere where they don’t have leaves or people to bother.”

The Washington State Capitol in Olympia sits in a 290-acre park, from which work crews clear 80 tons (180 dump truck loads) of leaves annually. It’s a big space. Nassau County has 14 incorporated villages that are smaller than 290 acres.

In this century, information travels faster than sound, and a lot of old claims about imposing hardships on businesses aren’t going to hold up. Opposing reasonable standards and precautions will grow support for a total ban.
Mike Miller has worked in state and local government. Email: mmillercolumn.gmail.com