Lauren Graham might just be the most underrated actress in Hollywood. Funny, smart and ridiculously talented, Graham won the hearts of fans worldwide as Lorelai Gilmore, a fast-talking, highly caffeinated single mom who always had a pop culture reference at the ready. For Graham, playing Lorelai for seven seasons was a life-changing experience.

“You don’t realize it as an actor when you’re in it, but it’s given me every other opportunity I’ve had,” she said.

Gilmore Girls, which centered around the close relationship between Graham’s character and her teen daughter, was one of the most popular shows of the early 2000s and continues to retain a strong and devoted following. Lorelai, a single mom who had a baby in high school, and her daughter Rory, a bookish teen who would rather stay in watching classic movies than going to parties, were atypical, but extremely relatable characters, surrounded by a motley crew of lovable townsfolk.

“Lorelai is a really wonderful, positive character and at the time, there weren’t really a ton of single parents being portrayed on TV,” said Graham on the popularity of the show’s characters. “I think the idea that Lorelai had Rory in high school, and turned that challenge into a positive is still something people admire.”

Graham and her Gilmore Girls costars recently got a chance to revisit their beloved characters with a Netflix revival which debut last November. Through 90-minute episodes, Gilmore Girls: A Year In The Life followed the mom and daughter through all four seasons, capturing their lives a decade after the original show left off.

“It’s an incredible opportunity to be given the chance to experience something again,” said Graham on returning to her character after nine years. “I was much more appreciative of it. It was very, very special.”

And while Graham may be best known for her role on Gilmore Girls, as well as her six seasons spent as Sarah Braverman on Parenthood, she’s also making her mark on the literary world. She first showed off her literary prowess with the charming and heartfelt Someday, Someday, Maybe, which received critical acclaim when it was published in 2013 and landed a spot on the New York Times bestseller list. Her 2016 memoir, Talking as Fast as I Can, was met with similar fanfare and allowed readers a behind-the-scenes look into Gilmore Girls, Parenthood and growing up Graham, all told in Graham’s witty and conversational voice. Graham’s currently working on a second fiction novel, about two girls in their 20s and how their relationship changes as they get older. 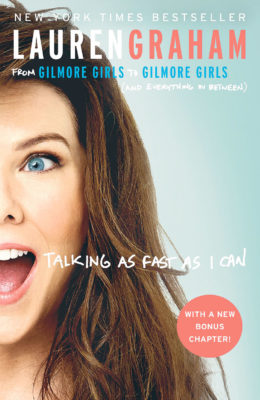 While some actors take to writing as a side gig, Graham said her love of literature was actually what spurred her onto pursue an acting career.

“Books were the most important thing to me growing up. I think I came to performing because I loved stories. It felt like the next natural step,” said Graham, who spent several childhood years in Southampton and on the North Fork. “All these years I’ve been reading scripts and I think that helped me when I felt inspired to write myself. It all comes out of a real love of storylines.”

But it’s not just books Graham’s putting her pen to. She recently finished the script for The Royal We, a film adaptation of the book of the same name, as well as signed up to write and produce Windfall, a novel written by her book editor, Jennifer E. Smith.

“I’m interested in romantic comedies, I feel they’re not as present as they used to be,” said Graham. “Windfall had this giant ‘what if?’ aspect to it and has a love story where you’re not sure what’s going to happen. I thought all that would make a real sweet film.”

And while she has numerous literary projects on her plate, the door is always open to return to Stars Hollow.

“I would never say no to playing that character again, but I leave it up to Amy [Sherman-Palladino] and Dan [Palladino, creators of Gilmore Girls] to be the people who know if it’s better left where it is,” Graham said. “I think the 90-minute movies really worked. I could see a holiday movie, but I’m really proud of where we left it.”