“I don’t think we’re in Kansas anymore.” That line from 1939’s The Wizard of Oz is one of the most famous in the history of the movies, right up there with “I’ll make him an offer he can’t refuse,” “Frankly, my dear, I don’t give a damn” and “May the force be with you.”

Before the movie, came the book. The film launched the career of the young Judy Garland, but the book, first published in 1900, marked the end of a long apprenticeship for its author, L. Frank Baum, a born storyteller who finally realized that putting those stories down on paper might hold handsome dividends.

Baum traveled a long and curious road to fame and fortune. The heir to a wealthy Upstate New York family, he was born in 1856 on an estate near Syracuse. Baum benefited from his comfortable upbringing. His parents hired tutors from England as the young man’s teachers. Baum was prolific even at a young age. He read through the works of William Shakespeare and Charles Dickens.

At age 14, his father bought him a printing press. The young Baum began writing and publishing his own newspaper; he also formed his own theater company. Baum and his wife, Maud, would eventually become the parents of four boys. However, the man couldn’t settle down. He couldn’t stop trying new business schemes as well. Baum, in time, would be in line for a handsome inheritance, which probably explained his reckless behavior. Over the years, Baum worked as a salesman, a newspaper editor and a storefront designer, while publishing books on breeding chickens and window decorating that didn’t sell. He moved his family to South Dakota, where he opened a general store. He also became the editor of the local newspaper. Restless as always, Baum moved his family again, this time to Chicago. There, Baum continued his newspaper work. The family arrived in the Windy City in 1893, the same year that Chicago hosted the World’s Fair. The fair was an enormous success, attracting visitors from around the world as exhibitors showed off their latest inventions. It was a time of great optimism and the city’s energy fueled Baum’s always-fertile imagination.

Baum, as noted, was also a born storyteller. Not only did he entertain his family; his stories always found an audience among neighborhood children. At long last, Baum, on the advice of his mother-in-law, began putting his stories into words. At night, when his family was asleep, Baum would retire to his study and began writing in longhand. His first book in the new style, Adventures in Phunnyland, had to wait seven years before finding a publisher. The World’s Fair contained a spectacular exhibit area, known as the White City. The waterfront exhibit was home to numerous technological wonders, including the Ferris Wheel. For millions of visitors, the White City seemed like an enchanted place. It also influenced Baum’s writing. When the man began writing the story “The Emerald City,” he was inspired by the White City. The story evolved into “From Kansas to Fairyland” and finally, to The Wonderful Wizard of Oz. Baum was at the end of his rope. He hired an artist, William Wallace Denslow, to do illustrations. Baum even paid for the book’s production. At Christmastime 1900, the Baum family were in their familiar dire straits. Maud Baum asked her husband’s publisher for a loan. What the family received instead was a check for several thousand dollars in royalties. The Wizard of Oz was a success. 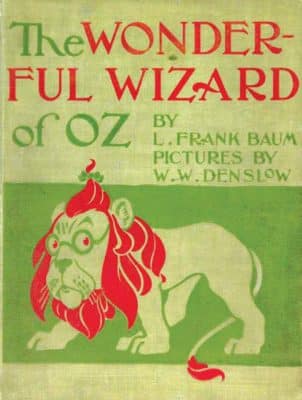 Always restless, Baum moved his family one last time, from cold and snowy Chicago to California’s sunshine. Baum purchased a mansion in Hollywood and continued his prolific ways. The man knew a good thing when he saw it. Over the next 20 years, Baum went on to publish 13 more Oz books, including The Marvelous Land of Oz (1904), The Emerald City of Oz (1910) and in the year of his death, The Magic of Oz (1919). That wasn’t all. In addition to the Oz franchise, Baum published 41 other novels, 83 short stories, over 200 poems and up to 42 scripts. Since the movie came out in 1939, some critics have claimed that the “wizard” Dorothy and her friends were off to see was Franklin D. Roosevelt, president of the United States. However, the novel was written in 1900, well before Roosevelt got involved in electoral politics. Other critics have noted the appearances of television, laptop computers and wireless telephones in his work, making Baum a canny observer of 20th-century life and the technological progress it would bring. Baum was also involved in the woman suffrage movement, even while denying that his stories had any hidden political message.

“If I am to do any good in the world, my highest ambition will be to make children happy,” the father of four declared when the first Oz novel was published. “The imaginative child,” he later added,” will become the imaginative man or woman, most apt to create, to invent, and therefore to foster civilization.”

Needless to say, Baum has been a smashing success. His books have been loved the world over by countless millions with millions more yet to be born to experience that same joy in the years and decades ahead.