Elvis Presley’s status as “King of Rock ‘n’ Roll” was largely based on his ability to send girls into fits of desire with a twitch of his hips—but it was Elvis’ proclivity for king-sized portions of fatty foods that made him the “King of Comfort Food” to gluttons everywhere.

Historically documented with eyewitness accounts, photographs and words from Presley himself, Elvis’ menu of favorite foods reads like the final meal on the Titanic, if the Titanic was permanently docked in a podunk town somewhere in Missouri. Elvis had a burning love for food, and he should be celebrated for it.

The Fool’s Gold Loaf is the devil in disguise that sees Elvis go off the deep end. To construct this biological calamity of a sandwich, split a loaf of Italian or French bread (dealer’s choice) long ways and slather the outsides with butter (or margarine), then bake the two halves until golden brown. Pull the bread out of the oven and dig out the white part to create bread canoes. 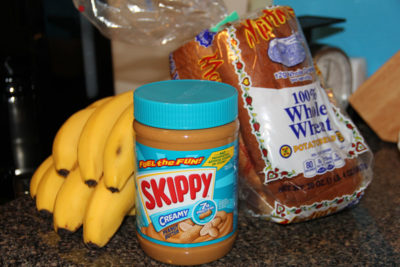 What you’re left with is an 8,000-calorie bomb that legend has it Elvis once chartered a private jet to Colorado to obtain one lonesome night.

Only fools rush in to that sandwich. Instead, start with the classic grilled peanut butter and banana sandwich if you want to eat like the king. Melt an entire stick of butter in a skillet. In the meantime, toast two slices of hearty white bread and mash one or two ripe bananas. Dollop the banana mash on one slice of the toasted bread and spread peanut butter on the other. Fry in butter until golden brown on both sides. This concoction is truly a big hunk o’ love, with the butter, peanut butter and banana melting together in a gooey, mouth-disabling bite. Eat over a plate with a bib to avoid the sticky contents from dripping out and ruining your blue suede shoes.

Of course, one could ratchet down the butter in the skillet for a healthier version—but if you want to eat like Elvis, you can’t hold back—you’ve got to shake your pelvis all the way to Graceland.