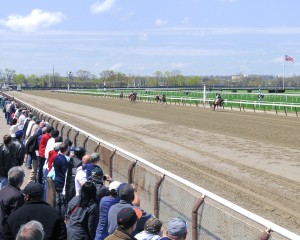 The Saturday, June 7, Belmont Stakes is a month away, yet thoroughbred horse racing fans began enjoying Belmont Park’s upgraded facilities on Thursday, May 1.

More high-definition (HD) televisions, a paddock video board, a backyard music stage, an expanded trackside picnic area and a modernized Belmont Café are among the ways the New York Racing Association (NYRA) has enhanced the fan’s experience at the storied Elmont venue. NYRA’s spring/summer Belmont meet began last Thursday and continues through Sunday, July 13, when the racing season moves to upstate Saratoga.

Since Belmont’s fall meet concluded last October, 131 new HD televisions were installed throughout the racetrack’s four levels, increasing by 25 percent the number of HD TVs from 2013. Like other live sporting events, a video transmission of the proceedings compliments the action. And, if you’ve chosen to wager on a race’s outcome, a replay offers a quick answer as to whether a photo finish went your way. The new paddock video board, anchored to an eight-by-15-foot display wall, also offers HD picture quality. Set in Belmont’s backyard, the paddock is where the horses in any given race convene before coming onto the track. It is also where a horse’s jockey and trainer can have a last-minute strategy session.

Belmont is reprising its twilight racing series in 2014, with the first race starting at 3 p.m., rather than 1 p.m., on four straight Fridays — June 20, June 27, July 4 and July 11. The twilight sessions have concluded in the past with live musical performances, one of the reasons NYRA installed during its off-season a new concert stage in Belmont Park’s backyard.

Meanwhile, the Top of the Stretch picnic area has been expanded, with two additional sections giving more fans the opportunity to watch the races while seated alongside the track. Those who prefer to stay indoors when dining can visit the refurbished Belmont Café, on the clubhouse’s first floor.

There are a few other dates to mark on the racing calendar prior to June 7’s Belmont Stakes. The track’s Mother’s Day card, on Sunday, May 11, features three graded-stakes races, along with prize drawings and giveaways after every race. Belmont’s first-ever “Wings Festival and Contest,” to be held on Saturday, May 24, will allow fans to sample the best chicken wings from area restaurants. Two days later, on Memorial Day, Monday, May 26, the card includes three more graded-stakes races. New York-bred horses will be the stars on Saturday, May 31, with six races restricted to horses born in New York State competing on what’s known as Big Apple Showcase Day. In addition, the TasteNY Farmers’ Market is returning to Belmont Park’s grandstand on the weekend of May 31-June 1, featuring local produce and products.

To create what NYRA is billing as a Breeders’ Cup-type event, five stakes races which were not contested on 2013’s Belmont Stakes Day will be part of the Saturday, June 7, card. For instance, the $1.25 million Metropolitan Handicap, also known as the Met Mile, had previously been run on Memorial Day, and has now been moved to the first Saturday in June. The purse money for the four other races which were switched to 2014’s Belmont Stakes Day card from other dates is substantial: the Ogden Phipps ($1 million), the Acorn ($750,000), the Brooklyn Invitational ($500,000) and the Jaipur Invitational ($300,000). Nothing tops the money offered to the owners and connections of the Belmont Stakes’ top finishers: $1.5 million.

Depending upon the outcome of last Saturday’s Kentucky Derby, and the Saturday, May 17, Preakness Stakes in Maryland, Belmont Park, site of the Triple Crown’s third and final race, may be the center of the U.S. sporting world on Saturday, June 7. But even after Belmont’s annual Super Bowl has come and gone, Nassau fans will have until mid-July to take in the track’s new amenities.
Mike Barry, vice president of media relations for an insurance industry trade group, has worked in government and journalism. Email: MFBarry@optonline.net