Here is a sampling of the happenings in the Long Island Weekly coverage area. Wednesday, June 16 Bird Walk Hosted by the North Shore Audubon Society at...
Read more
Calendar

Bethpage Air Show planes and others get their close-ups Memorial Day Weekend is when we honor our fallen veterans, the sacrifices made by active duty...
Read more
TOP STORIES 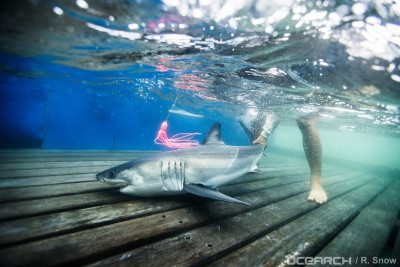 A juvenile white shark, being tracked via satellite in the New York seascape, has been named after Theodore Roosevelt, the US president who appointed the committee in 1894 asking New York State to establish a zoological society in New York City—which through the years developed into the Wildlife Conservation Society (WCS).

Teddy, a 78-pound, five-foot male shark, has been tagged by a research team aboard an OCEARCH vessel, the MV OCEARCH, collecting data with its partners, including the Wildlife Conservation Society in the New York Bight. Since Aug. 11, the team has been conducting an expedition to research the marine life in these waters. The full research team on the MV OCEARCH includes OCEARCH, WCS, NOAA Fisheries, South Hampton Schools, Florida Atlantic University, New Jersey Institute of Technology, and Stony Brook University.

Several sharks have been tagged and are being tracked via satellite. As the sharks break the surface of the water, the satellite tags they carry transmit their geographic location to land-based researchers; the public can follow the movements of the sharks, including Teddy, online via Global Shark Tracker or by downloading the Global Shark Tracker App available for Apple and Android platforms.

“The old lion would be delighted to know that a great white shark had been named after him. As a serious naturalist he would be even more pleased by the ongoing scientific research done by WCS,” said Theodore Roosevelt IV, the great grandson of the president.

“Teddy the shark was named Theodore Roosevelt in honor of WCS, one of our collaborators on this expedition,” said Chris Fischer, Founding Chairman and Expedition Leader. “I also had the great privilege of planning this New York expedition on Teddy Roosevelt’s table at the Explorers Club in Manhattan.” 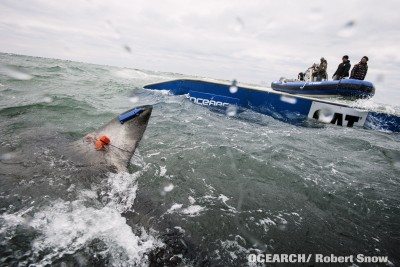 “This is a historic moment for science and research. We have potentially discovered a white shark nursery in the North Atlantic,” Fischer added. “I am thrilled to have WCS as one of our collaborating science partners; this is just the beginning. I look forward to continuing this research around the white shark nursery for the next few years.”

OCEARCH, WCS and the team of collaborating scientists are joining forces for a wide-ranging study to gather data on the ecology, physiology, and behavior of sharks in the Atlantic Ocean, with a special focus on blue, mako and great white sharks.

“The expedition with OCEARCH has been phenomenal and helpful to our research in the New York Seascape,” said Jon Forrest Dohlin, Director of the WCS New York Aquarium. “Each day, our team is out on the water with OCEARCH and our others partners, we are collecting important data about the marine life just off the New York and New Jersey shores. We thank OCEARCH for this collaboration and for honoring the history of WCS with the naming of one of the tagged sharks after Theodore Roosevelt who helped to spark our founding in 1895. This shark is now a part of the long history of WCS’s efforts to save wildlife and wild places around the globe.”

Theodore Roosevelt, the 26th President of the United States, is one of the country’s greatest conservationists.

In 2015, OCEARCH open sourced the data on the Global Shark Tracker to 2.3 million users. OCEARCH also inspires current and future generations of explorers, scientists, and stewards of the ocean through its STEM Learning Program. The free STEM Curriculum, available for grades K-8 and created in partnership with Landry’s, Inc. enables students to learn STEM skills while following the real-time data on the movements of their favorite sharks.

The researchers OCEARCH supports work aboard the M/V OCEARCH, a 126′ Cat powered vessel equipped with a 75,000 lb. hydraulic research platform, where the ship serves as both mothership and at-sea laboratory. Scientists have approximately 15 minutes of access to live, mature sharks to conduct up to 12 studies. The sharks are measured, tissue and blood samples are collected, and satellite and acoustic transmitters are attached. Over 113 researchers from 59 regional and international institutions have partnered with OCEARCH.

OCEARCH expeditions are funded through socially innovative partnerships with global leaders who enable OCEARCH initiatives, including Costa Sunglasses and Yeti.

WCS saves wildlife and wild places worldwide through science, conservation action, education, and inspiring people to value nature. To achieve our mission, WCS, based at the Bronx Zoo, harnesses the power of its Global Conservation Program in nearly 60 nations and in all the world’s oceans and its five wildlife parks in New York City, visited by 4 million people annually. WCS combines its expertise in the field, zoos, and aquarium to achieve its conservation mission. Visit newsroom.wcs.org for more information, or call 347-840-1242.

Wildlife Conservation Society’s New York Aquarium is open every day of the year. Summer hours are 10 a.m. to 6 p.m. daily. Fall/winter/spring hours are 10 a.m. to 4:30 p.m., daily. Tickets are $11.95 per person (ages 3 and up), and include Aquarium admission plus one admission to the new 4-D Theater; children age 2 and under are admitted free. Fridays after 4 p.m. in the summer and after 3 p.m. in the fall, Aquarium admission is by pay-what-you-wish donation.

For directions, information on public events and programs, and other aquarium information, call 718- 265-FISH or visit our web site at www.nyaquarium.com. Now is the perfect time to visit and show support for the WCS New York Aquarium, a beloved part of Brooklyn and all of the City of New York. Due to Hurricane Sandy we are partially opened. Visit www.nyaquarium.com for more information.