A new play opened in previews this week that Long Islanders might take a particular interest in. It’s called The Babylon Line, named after the southern branch of the Long Island Railroad. The play takes place in 1967 Levittown, in an adult education creative writing class. Josh Radnor, of How I Met Your Mother fame, and Elizabeth Reaser, of the Twilight films, star together as teacher and student who share a special attraction.

Julie Halston plays Midge Braverman, another student, one of three women also taking the class. “They are three housewives from Long Island, they’re Jewish—Frieda Cohen, Anna Cantor and I play Midge Braverman,” said Halston. “I think I am the character who is the most optimistic.”

She continued, “She [Midge] has a more open mind than the other two and has the capacity to maybe move beyond the cookie cutter mentality of just living in Levittown.”

The play, written by East Meadow native Richard Greenberg, is an homage to Levittown. “Levittown in a way became a real symbol in America of everything what was cookie cutter, stereotypes, mass produced, assembly lines,” Halston said. Her character desires more.

Halston knows the area well. She grew up in Commack and identifies with Midge and her friends. “I relate to the idea of wanting to move to the big city and live beyond the borders of Long Island,” she said. “Yet I absolutely love Long Island. I loved growing up there.”

Though she grew up in a Roman Catholic household, Halston had many Jewish friends and spent time at their houses. “I know these women. Some of these women were my mom’s best friends and our neighbors,” she said.” So I totally understand the whole milieu. And I have great affection.”

Halston particularly enjoys the role because she is able to slip into her natural accent. The vocal coach would even ask, “Okay, Julie, how do Long Islanders say this?” and she’d answer channeling her best Rosie O’Donnell, another Commack native.

She joked that her husband, broadcaster Ralph Howard, says, “Oh my god, the accent’s gotten worse!” every time she returns home from a trip to Long Island.

Beyond the locale and time period, The Babylon Line is an examination of creativity and it’s also about love and loss. Halston explained there is humor and drama and that “it’s a very human play.” She credits Richard Greenberg for using beautiful, inspiring language.

“He’s done an absolutely beautiful job of putting together a play with elevated language and yet captured a place and time, along with a whole group of people,” Halston said. “It’s also a hopeful and poignant story of people who are trying to do their best.”

She continued, “Right now, I think that’s something I think we all want to see. People doing their best and trying to make sense of the world.

“Quite frankly, I don’t know if this play could be more timely,” Halston added, referring to the recent election season. “We’ve just been part of an election where the language was so inflammatory, so brutal and so mean. People would say things like, ‘Oh, it’s just words. They don’t matter.’ But words do matter.”

Halston said, “One thing Richard Greenberg understands is that writing, language, the way you communicate, it all matters and you have to be careful. You really do.”

Halston believes in the restorative power of words. “It was so moving to me, with her language, Hillary Clinton, in her concession speech, was healing all of us,” she said.

The rehearsal process for The Babylon Line was interesting for the actors, who began developing the play with New York Stage and Film at Vassar’s Powerhouse Theater two years ago. The initial response to the play was great, but it took time to get to Broadway. In the meantime, the play kept being worked on.

The Mitzi E. Newhouse Theater has a thrust stage, placing the actors out in the audience, as opposed to the more typical proscenium stage. “It had to be restaged to accommodate this playing space, so we had to really deconstruct the play once again and look at it from a different perspective,” she said.

Also, adding Elizabeth Reaser to the mix, who was not at Vassar, brought a new rhythm. “Poor Elizabeth was coming into the process completely new, but she’s so great,” Halston said. “She’s such a great gal. We all fell in love with her day one.”

Between the cast changes, the different staging, the cuts and additions to the script, Halston felt like she and her colleagues were working on a new play. “We didn’t just go into it saying ‘I know how to do this.’ We looked at it afresh,” she said. “I think the play is even deeper in meaning. It’s resonating more now.”

In addition to all of these elements, The Babylon Line is ultimately about storytelling, and is sure to move audiences.

It is as wonderful an experience for the actors as it is for the audience. “Many of us say ‘I got this TV pilot and I’m glad I got the money because I need to redo my kitchen,’” Halston joked, “But everyone wants to keep doing theater because it’s the thing that nourishes the soul.”

“It’s a special play,” said Halston. “The cast is incredible. I’m really proud to be a part of it.”

Halston has several upcoming projects that she’s excited about. One is a play that she hopes will continue its track to Broadway. The other is a web series called Hotel Bleu, a continuation of a short film of the same title that won awards at film festivals. It takes place in a New York City hotel full of eccentric people and is about a down-and-out comedian (Halston) who has to change her life.

Halston has done it all—from stage and film to television and now a new web series. “I’m a lucky actress,” she said. “I get to work a lot.”

She acknowledges show business has its ups and downs, but said, “It’s a wonderful way to live a life that’s full of emotional richness.” 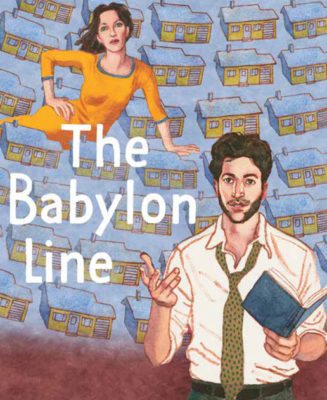