When John Tesh hit the stage at the Adelphi University Performing Arts Center recently, it was very much a homecoming and a family affair. Born and raised in Garden City right up through graduating from Garden City High School in 1970, Tesh revisiting a place that holds a very special place in his heart. As for the latter, the multimedia show he’s touring with, “Songs and Stories from the Grand Piano,” includes son Gib Gerard doing some of the heavy lifting, including opening up the show with a stand-up comedy set and accompanying his pop on ukulele. It’s an extension of the syndicated Intelligence for Your Life radio show both men do, along with Tesh’s wife Connie Sellecca. For the delightfully self-deprecating Tesh, the current stage show is a chance to share both his roots and the enormous familial connection that defines so much of his life.

“[Attendees] will see themselves in this show. We just finished taping our seventh PBS special about a week ago. The show is called ‘Songs and Stories From the Grand Piano’ and it’s all about growing up in Garden City, having braces and being hideously skinny along with being in the marching band. So there’s a lot of that in there,” he explained. “There’s also a story about overcoming a deadly disease, which is near the end of the show. Baby Boomers come to my show. So it’s usually women, 45-plus, who drag their boyfriends and husbands to a John Tesh concert. So there’s a lot of projection and we’re synchronized to videos and slides. It really is a trip down Memory Lane.” 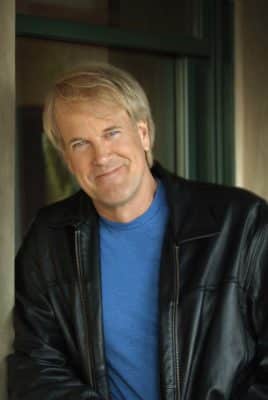 The former Seabury Road resident has plenty of warm memories about the village ranging from the enormous influence his late trumpet teacher Mr. Wagner had over him when he first picked up the instrument at Stewart School (“He was fearless and so positive. Stewart School was a performing arts school for elementary school kids.”) and working at the now-defunct Garden City Cheese Shop on Seventh Street (“A lot of times after soccer practice, I would go there and work and I had a little bit of acne. So I smelled like cheese and Clearasil, which just sort of added to my popularity”) to playing in a couple of rock bands on the local Long Island live music scene (Daze of Knight; Best of Both Worlds). For Tesh, there is no question of the ever-lasting impact growing up in Garden City had on him, right through naming his label after his home town.

“I use this as a very loose analogy. Imagine Superman on the planet Krypton and all of a sudden he’s launched in that rocket to Earth and for some reason, he can fly and has X-ray vision and all these other powers,” he explained. “That’s how I felt when I left the Garden City school system and went to college. Everything was just so easy. And it was because I think being in the Garden City school system was like being in a performing arts school.”

Currently working on a memoir titled Relentless that’s due to hit the street in February of next year, Tesh’s Christian faith is shaped by deep humility and a relentless work ethic. Among the anecdotes he shares during his current tour and in the book are his surviving a 2015 metastatic prostate cancer diagnosis. And how he being was expelled from North Carolina State after forging a professor’s name to a drop-add card.

“When I was a junior, my dad was the vice president of Hanes Underwear. He decided I needed a real job and didn’t let me go to music school. So he enrolled me at North Carolina State University in textile chemistry. I lasted maybe six semesters. I tried to switch majors, so I had to drop a bunch of courses. I tried to drop statistics and the professor wouldn’t let me do it. So I did what nobody else would do—on the advice of one of my dorm mates, I signed his name to the drop/ad card,” he explained. “I got caught and they said I had broken the honor code, which I had, and they kicked me out indefinitely. It was supposed to be for a semester. I was homeless. My dad threw me out of the house and I was living in a park, homeless, in North Carolina for three or four months, pumping gas.”

Tesh picked himself up, and long before his 10-year stint anchoring Entertainment Tonight, he went from reading the news for Rick Dees at WKIX-AM in Raleigh, NC. to being an anchor in Orlando and Nashville, before landing at WCBS-TV in New York at the age of 22. He wound up in a newsroom working alongside fellow cub reporters Meredith Viera, Brian Williams and Linda Ellerbee. Nowadays, the 33 hours a week he puts in with his family’s radio show is his primary passion, alongside his love of performing live. The ability to help people is what continues to drive Tesh.

“Our battle cry is that if it doesn’t make you better, healthier, happier or just more interesting, we won’t put it on the show,” he said. “We’ve had so many people suggest we should do celebrity birthdays or talk about current events. Nope. We’re going to move you forward in your life from where you are right now. I just recently had a great offer to do a game show with a lot of money. I just felt I wouldn’t be focused on what the prize is.”