Star of Something Rotten! shines on stage

Multitalented, award-winning John Cariani currently stars on Broadway as Nigel Bottom in the hilarious Something Rotten! which takes place in 16th-century South London during the time of Shakespeare and recently celebrated its one-year anniversary.

Cariani is no stranger to Shakespeare. His career began in the late ’90s with the Hudson Valley Shakespeare Festival. He played Speed in Two Gentleman of Verona off-Broadway in 2005, and later worked with Adrian Noble, one of the world’s foremost Shakespeare interpreters, in The Tempest and Much Ado About Nothing at the Old Globe in San Diego.

His love and knowledge of Shakespeare gives Cariani a leg up when it comes to the inside jokes in Something Rotten!, of which there are many. The story follows two brothers, Nick and Nigel Bottom, who yearn for the fame The Bard has achieved. They set out to write not just a play, but a “musical,” a brand new concept at the time.

“One of the things I like [about Something Rotten!] is the book,” said Cariani. “It’s a silly show, but the book makes sense. It doesn’t take itself too seriously and it knows what story it’s telling and it tells that story really well.”

Karey Kirkpatrick and John O’Farrell wrote the book and Wayne and Karey Kirkpatrick wrote the music for Something Rotten! Wayne Kirkpatrick won a Grammy for Eric Clapton’s “I Can Change the World” in 1997. Cariani said, “The music is really accessible, with great hook-driven melodies that I just love.”

Something Rotten! is one of only a few musicals Cariani has been in. “It’s fun to be in something brand new because every element is a surprise,” he said. “People don’t know what’s coming.”

Cariani first got involved in the show through his connection with Casey Nicolaw, director and choreographer. In 2009, Nicolaw directed Minsky’s at the The Ahmanson in Los Angeles, a Broadway-sized house run by Center Theatre Group.

In 2012, Cariani was invited to a reading for Nicolaw’s new project, Something Rotten! Of all the actors who read for roles at that time, Cariani is the only one who made it to opening night in 2015. “When I read the role at the very first reading, the writers decided that I was Nigel and I got to stay with the show all the way to Broadway,” he said.

Cariani put a lot of thought into taking on the role and developing the character of Nigel, who is treated as second fiddle by his older brother, whose grand aspirations overshadow Nigel’s innate talent. “In rehearsals, the director wanted me to work on being as innocent as possible,” he said, highlighting Nigel’s naiveté and optimism. 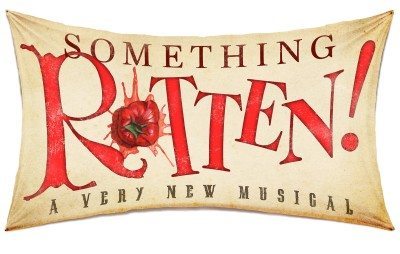 During rehearsals, he saw a group of high school kids on the subway and noticed everything they said sounded like a question. “So I thought, I’m going to make Nigel like those kids because when you make everything a question, you sound really uncertain,” Cariani explained. “I started to use that. Everything Nigel says is a question or an apology. That’s just kind of how he goes through life.”

Nigel’s innocence is an endearing aspect of the narrative, yet he brings an unexpected comic relief as well. Cariani admits it is sometimes hard to keep a straight face during the punchlines.

“The show is populated with some of the best comic actors on Broadway,” Cariani said. “They’re all adventurous actors and they try new stuff all the time. We actually try to make each other giggle onstage.”

He added, “If you’re in a comedy and you’re on the verge of giggling—that’s what keeps it alive.”

Cariani’s castmates include Brian d’Arcy James and Christian Borle, well-known on stage and screen. D’Arcy James became a mentor to him offstage. “One day I was having trouble with my singing,” Cariani recalled, “and he said, ‘John, you just have to fake it. Pretend. Pretend to be a great singer and you will be a great singer.’” Cariani counts it as great advice he’s used on many occasions.

Cariani runs things by d’Arcy James before an audition and brings him his career concerns. He added, “We have a good time because we both love really bad ’80s music.”

As for Borle, “I’ve never worked with somebody who’s as inventive and hilarious as he is,” Cariani said. “He’s funny and creative…and I’ve never seen anybody control an audience the way he does.”

Cariani emphasized how all of his colleagues are team players, less concerned with self-promotion and more concerned with being encouraging and making the show better.

The irony is not lost on Cariani. He loves when students who recently staged the play bring copies of the script for him to sign after the show.

In addition to theatre, Cariani has had many film and television roles, notably playing forensic expert Julian Beck on Law & Order. His latest project is Paper Dreams, an upcoming movie with Didi Conn.

No matter the medium, Cariani excels at whatever he does. His love for the material and the character shine through his performance in Something Rotten! It is not to be missed.

For more about Something Rotten!, see Welcome to the Renaissance.

Welcome To The Renaissance