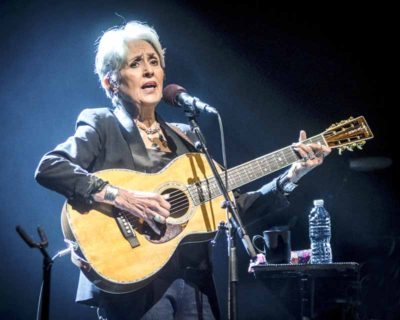 Joan Baez has always involved herself with numerous social issues throughout her life, including civil rights, protesting the Vietnam War, human rights and poverty. Having celebrated her 75th birthday on Jan. 9 of this year, she also released the double-CD Joan Baez 75th Birthday Celebration in June. And while this collection of live songs was recorded at the Beacon Theatre, featuring numerous famous guests including Emmylou Harris, Judy Collins, Paul Simon, David Crosby and Jackson Browne, it’s the upcoming tour that ties directly into the socially conscious work Baez has always been known for.

During this upcoming string of dates, the Staten Island native will be advocating for the Innocence Project and the Innocence Network, organizations that use DNA and pro bono legal and investigative services to exonerate people who have been wrongly convicted of crimes and reform the system to prevent further injustice. It all started when Baez, an avid painter, received a book with photos of people that had been unfairly incarcerated.

“I was painting in my little studio and I mostly do portraits. Somebody sent me the book The Innocents that has all these faces on the cover of exonerated prisoners. I picked one and started painting it,” she recalled. “I started reading and it’s sort of up my alley. Especially now with what we’re going through in the States. It couldn’t be more relevant.”

At each venue, volunteers from Innocence Network organizations will inform concertgoers about efforts to exonerate people who have been wrongfully convicted of crimes and to reform the system to prevent these incidents from happening. It’s work Baez is very impressed by.

“From what I understand, they do it not unlike how Amnesty International used to do things,” she said. “Which is, you pick somebody that’s local or near you and work on that particular case. And that gives somebody a feeling of closeness. So I’m very much looking forward to that.”

With a recording career dating back to 1960, Baez had plenty to sift through in regard to material and guests to invite to the Beacon show that yielded her latest release. While she was disappointed when scheduling conflicts precluded younger artists like Marcus Mumford and Rhiannon Giddens from participating, Baez was pleased with how it all turned out. Old friends like Browne, Harris, Collins, Crosby, Simon and Mavis Staples turned out with the Indigo Girls, Damien Rice and Mary Chapin Carpenter representing the younger generation of social activist musicians. It’s a process that took a couple of months to pull together. 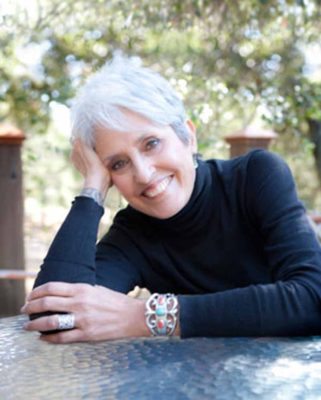 “I had a list a mile long and my manager and I worked together picking people. Then you have to find out who’s available and who isn’t and you don’t want to ask too many people. I’m in and out of my own self-hypnosis for days, so by the time I get to the stage, I don’t know which me is going out there. But then it makes it fun. I’ve done all the work,” she explained. “A lot of times, songs are obvious like Paul Simon and ‘The Boxer.’ I asked him if he wanted to try something different and he said, ‘No. Too much work.’ And that’s how I feel about it. I don’t want to take on something new, so you take on a lot of chestnuts. But that’s what people want to hear anyway. The young people have their careers going on. So they had to bow out or had already said no. That was disappointing but on the other hand, these were my peeps that showed up.”

Baez, who was raised as a Quaker with beliefs of pacifism, dates her earliest act of protest to the age of 15, when she protested the post-apocalyptic 1959 sci-fi film On the Beach with her father, Albert, and being a conscientious objector in refusing to leave her high school during an air-raid drill. And while the late Pete Seeger, Bob Dylan and decades-long friend Harry Belafonte were her early social justice influences, the landscape has changed considerably despite issues like climate change, the corporate prison system and racial injustice still being primary concerns.

“There’s a notion about how social change won’t come without people being willing to take a risk. Seeing that kind of activity on the line, you don’t find too much of that [nowadays],” she said. “And maybe the songs that are being written, we’re just not hearing, because we don’t have a platform. In the 1960s, they passed over from being counter-cultural to being the culture. That 10-year period is just not going to be repeated.”