Some people have a knack for being in the right place at the right time. Count Texas native Jesse Dayton as one of those folks. Not unlike Tom Hanks’ Forrest Gump, the Texas native has enjoyed a career that’s found him enjoying a number of twists, from being being plucked out of obscurity to play guitar for Waylon Jennings, swapping stories with President Bill Clinton at the Second Inaugural Presidential Ball or having Rob Zombie tap him to compose the music for a trio of cult horror films including The Devil’s Rejects and Halloween 2. His latest project, Mixtape Volume 1, continues down the same rebellious path that this self-described free thinker from Austin started on when he strapped on a guitar to play on a Rockin’ Dopsie recording session at the tender age of 16, While Dayton cut his teeth on hardcore honky-tonk growing up, he eschewed dipping into the canons of stalwart country icons like Hank Williams, Hank Cochran or Merle Haggard. For this all-covers collection of 10 songs, Dayton took a hard left and instead put his own twist on tracks by The Cars, Gordon Lightfoot, The Clash and AC/DC. It was a necessary creative detour he was looking to make. 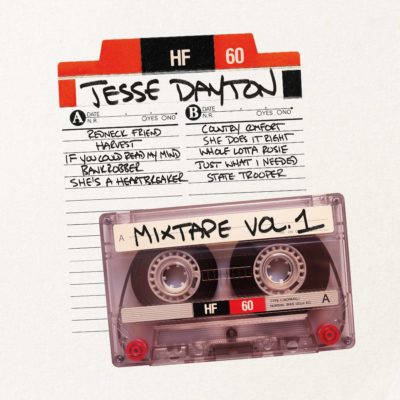 “We did two records back to back, that were original records, and they both did really well, critically and commercially. But we’d been on tour for four years straight, with barely a break. I just wanted to change it up and do something fun,” he said. “That was kind of the thing, to just get out of our comfort zone of write, record and tour. We wanted to throw some different stuff into the mix and tear some of these genre loyalists down a little bit and get them out of their comfort zones. I wanted them to be thinking they couldn’t believe that I did a Gordon Lightfoot song and a Clash song on the same record. So I picked 25 songs, got my acoustic guitar and figured out what songs worked the most natural with my East Texas drawl, so I wasn’t forcing my colloquial voice down the throats of people. I’m self-aware about that kind of thing. I didn’t want to redneck it up so to say.”

The end result finds The Clash’s “Bankrobber” sounding like a second cousin to the Bobby Fuller Four’s “I Fought the Law,” Elton John’s “Country Comfort” getting infused with rich mix of ethereal steel guitar and a wailing harp while the New Wave gem “Just What I Needed” gets transformed into a ballad that wouldn’t have sounded foreign being crooned by Dayton hero George Jones. It’s not unusual once you learn that Dayton grew up in Beaumont, TX, mixing musical genres as a teenager and not thinking twice about it.

“I grew up in Texas listening to the same stuff that everyone else was listening to, which is classic rock and all that kind of stuff. But, seven nights a week, we had every major country superstar on the planet selling out my hometown,” he recalled. “So I might go see The Clash one night in Houston and then drive back home and see David Allan Coe and Johnny Paycheck the next night. I didn’t think it was that weird until I got around other people and they thought it was incredibly weird.”

That open-minded approach to music served Dayton well and helped shape his sound. The same one that found the aforementioned Jennings spotting the young Americana artist appearing on the Nashville talk show Crook & Chase, picking the phone up and inviting him to play on a project that became the 1996 album Right For the Time.

“I was on this cheesy Nashville talk show that was like Christian Broadcasting Network or something. When Waylon said to come over to the studio, Johnny Cash opened the door, which was mind-blowing. Johnny asked me if I was going to stand there with my mouth open or come in and play guitar,” he said with a laugh. “Mark Knopfler and Peter Anderson from Dwight’s [Yoakam] band were supposed to play on that record but when I got to the studio, [Waylon] told me that I was playing on that record and they weren’t playing on it. That was amazing. I learned a lot from him, just from watching him record. A lot of people don’t know that he’s one of the best harmony singers ever. He was one of those guys that could just step up to the mic and sing third or fifth. He was so much fun.”

Among the other iconoclasts Dayton has worked with are Lucinda Williams (“I adore her. She’s a hero”), X’s John Doe (“I’ve never been around a more principled human being. John Doe would turn down $20 million if he thought it was against what he stood for”) and Zombie (“The best way to describe Rob is that he has access to the little kid in him like no one I’ve ever met in my life”). Artists like this validate the unorthodox approach he’s take to his music, both in the recording studio and on stage. Suffice it to say, folks coming to see Jesse Dayton won’t have to worry about being lulled to sleep.

“We have such an eclectic crowd. We have people that are into heavy rock and roll. We have country music parents who like to bring their kids out. We have punk rockers. We have such a strange and eclectic thing because our show is so high energy. That’s why we can’t play with a lot of bands. We really had to go out and build it on our own. We played with other bands. Our show is high energy man. It’s like going and seeing…I don’t want to compare us, but it’s like a high energy, hillbilly rock and roll show. That’s what it is. I think if I see another mid-tempo, acoustic Americana band, I’m going to slit my wrists,” he said. “I do break down in the middle of a show and do some acoustic songs at some point. But otherwise I’m just beating you over the head. Don’t bring your pillow to my show.”