Here is a selection of activities and events in the Long Island Weekly coverage area. Thursday, June 3 Inside the Mind of a Whale Virtual program starts...
Read more
Long Island News

In the ninth annual Pinstripe Bowl at Yankee Stadium, sophomore Jack Coan led the Wisconsin Badgers to a whopping 35-3 victory over the Miami Hurricanes. It was a nice victory in a bowl game, but it meant something more to Coan: It was his first time playing football in New York since his days in Sayville.

“I was really excited,” said Coan. “When I found out I would be starting, I had like 50 people that I gave tickets to and a bunch of people I knew that bought tickets too. To be in Yankee Stadium for this game was great because I was there when I was little watching the Yankees play.”

While he enjoyed watching baseball as a kid, football was a love of his from very early in his life. He started playing the sport in early elementary school with his dad being one of the coaches on his earliest team. He was a quarterback right away, and he never turned back on playing the position.

“I was pretty much quarterback my whole life, which is pretty cool,” said Coan. “I like having the ball in my hands. As a quarterback, you touch the ball almost every play and you’re in a leadership role. You got to help your team play well and keep calm. You have a big impact on the outcome of the game.”

Growing up in Sayville, Coan had a lot of support from the community as it loves the local football teams. He was a star as well, winning the Boomer Esiason Award as the top quarterback in Suffolk County, the Hansen Award for Suffolk’s greatest player, as well as a few statewide and tristate awards while playing at Sayville High School. 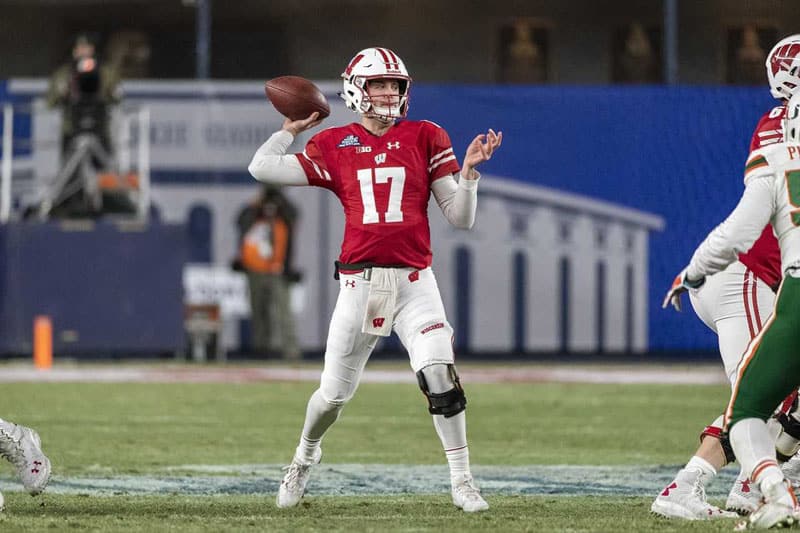 “It’s such a tight-knit community,” said Coan. “I grew up playing with pretty much the same group of kids all through the youth league and high school which was pretty special.”

Coan loved the sport, but he didn’t think colleges were going to be lining up for him to come play with them. He was surprised to see a handful of colleges express interest, including some on the Division-I level. He ended up picking a faraway school with a rich history in the University of Wisconsin.

“You rarely see kids from Long Island go to Division-I so the minute colleges came and started talking to me, I knew I was going to play,” said Coan. “I picked Wisconsin because I like the school and campus. The coaching staff is filled with great guys there and they develop their players really well.”

Coan just completed his second year with the program, and it was definitely his more eventful year as a Badger. He got his first official start against the Northwestern Wildcats and had a solid 158-yard outing. He also got starts against the Penn State Nittany Lions and Purdue, with his first win coming against the Boilermakers. 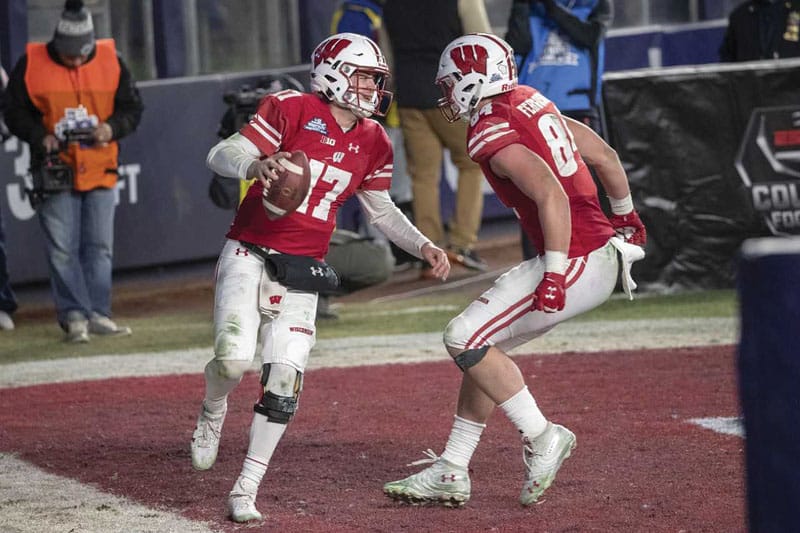 “It was a dream come true,” said Coan. “It was always a dream to play college football and all the stuff that comes with it. To play it with all the people at home supporting me, it was really cool for me and those people as well.”

The people at home would later get a chance to watch Coan play close to home, as Coan surprisingly was elevated to starter after Alex Hornibrook, the team’s starter for most of the season, was dealing with a head injury that held him out of the Bronx showdown. Coan shed his redshirt year to play, which means he will be a junior next season instead of a sophomore for a second year.

In the game, Coan threw 11 passes, with six completions and one touchdown. He had a key score in the game, rushing for seven yards into the Badger-painted endzone to cement the game for Wisconsin. After hoisting the George M. Steinbrenner trophy, Coan reflected on what the people from his hometown mean to him.

“They’ve definitely had a huge impact on me,” said Coan. “A lot of people have been rooting for me and I feel like I represent Long Island wherever I play. It was an unbelievable experience and I’m happy all my fellow Long Islanders were able to share it with me.”