It’s All In The Family

Major league baseball scouts love recruiting the sons of former big leaguers. Such youngsters have spent their youth in and around ball parks. They have a feel for the game, plus there are the bloodlines. From the game’s beginnings, many a family has produced not one, but several stars. Think of the three DiMaggio brothers: Joe, Vince and Dominick (a popular ditty by Red Sox fans went, “Who’s better than his brother Joe?/Dom-i-nick Di-Mag-gio”). And who can forget the madcap brother act of Dizzy and Daffy Dean? Here are some of the many father-son combinations.

Here is the only instance of a father-son combination playing together on the same team (the 1989 Seattle Mariners). Ken Griffey (top right) was a star for the legendary “Big Red Machine” Cincinnati Reds of the 1970s. “Junior” surpassed the father, finishing with 630 career home runs and will enter Cooperstown this summer with the highest percentage of votes that any player has ever achieved.

Descendants of Daniel Boone, here is a grandfather-father-son dynasty. Ray Boone was an All-Star for the Cleveland Indians. Bob Boone was the catcher for the 1980 World Champion Philadelphia Phillies. His two sons had stellar careers. Aaron Boone’s dramatic extra-inning home run off Tim Wakefield lifted the New York Yankees into the 2003 World Series. His older brother, Bret Boone, drove in 141 runs for the 1999 Seattle Mariners. All four Boones have been All-Stars, a feat that has not been achieved before or since. 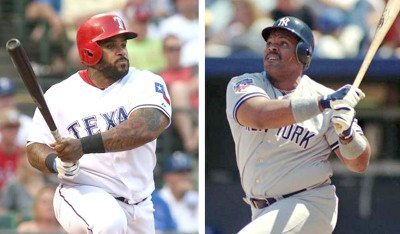 The two Fielders have terrorized major league pitching for decades. Cecil (top right) gained national attention by hitting 51 home runs for the Detroit Tigers in the 1990 season. Not to be outdone, Prince clouted 50 for the Milwaukee Brewers in 2007. This is the only father-son combo to have 50 round trippers each.

Felipe Alou played on San Francisco Giant powerhouses of the 1960s that featured two of his brothers: Mateo and Jesus. His son, Moises, had 372 career home runs and a .303 lifetime average. Felipe both played and managed for the Giants.

In the 1970s, Bobby Bonds was considered one the game’s top all-around stars, playing for the San Francisco Giants and later, the New York Yankees and California Angels. Barry, surpassed his father, winning the National League Most Valuable Player award seven times. Since retirement, steroid use accusations have dimmed his star considerably.