September 11, 2001, is a day New Yorkers will never forget. We know about the heartbreak and tragedy and we know the stories of people coming together in the aftermath, but there is a story of that day we don’t already know that warms hearts instead of breaking them. Come From Away tells that story magnificently.

When the unthinkable happened in New York City, American flights around the world were grounded. Thirty-eight airliners carrying 7,000 people were diverted to Gander International Airport on the island of Newfoundland in Canada, practically doubling the population of the small surrounding cities. On the grimmest day in anyone’s memory at the time, all anybody wanted to do was help. The townspeople opened their homes to the stranded passengers, welcoming them with open arms, and displaying a breathtaking level of kindness.

It sounds like an anecdote you might read in the newspaper or learn about from a segment of This American Life, but these events are best told from the stage, with music inextricable from the culture of Newfoundland. Celtic influenced song drives the narrative with an infectious rhythm, using instruments not common on Broadway—bodhrán hand drums, fiddles, accordions and an “ugly stick,” a uniquely Newfoundlander instrument fashioned out of household items.

With a true ensemble cast, Come From Away captures the spirit of the islanders as well as the emotions of the refugees. Each cast member plays several characters, seamlessly switching identities through simple costume changes and intricate choreography. With 12 actors on stage, plus the band, and no intermission, following along could become overwhelming, but it doesn’t due to the caliber of performers and the attention to detail paid by the creative team.

Some characters were based on real people, while others were composite sketches of folks creators Irene Sankoff and David Hein met during the 10th anniversary of 9/11 in Gander while conducting research for the show. As real-life airline pilot Beverley Bass, the first woman captain at American Airlines, Jenn Colella’s performance of “Me and the Sky” is a standout moment deserving of a standing ovation. However, the show pauses for nothing. Every moment unfolds to reveal a new relationship beginning or a new friendship forming or a commonality being found between the unlikeliest of people.

Among these connections is a thread of social commentary—a gay couple worried about how they’ll be received in an unknown small town, an Egyptian passenger who faces suspicion based only on his race and a young black man incredulous about how nice and trustworthy the locals are. One of the funniest moments in the musical comes when Bob is instructed to gather barbecues from backyards for a big town cookout. He obliges, expecting to be shot, but ends up pleasantly surprised.

The show is truly inspirational. You’ll walk out feeling like a Newfoundlander too. 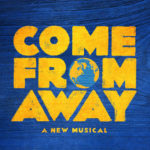 Come From Away earned seven Tony nominations, including one for best musical. It will certainly give the other nominees a run for their money at the 71st Annual Tony Awards on June 11 on CBS.